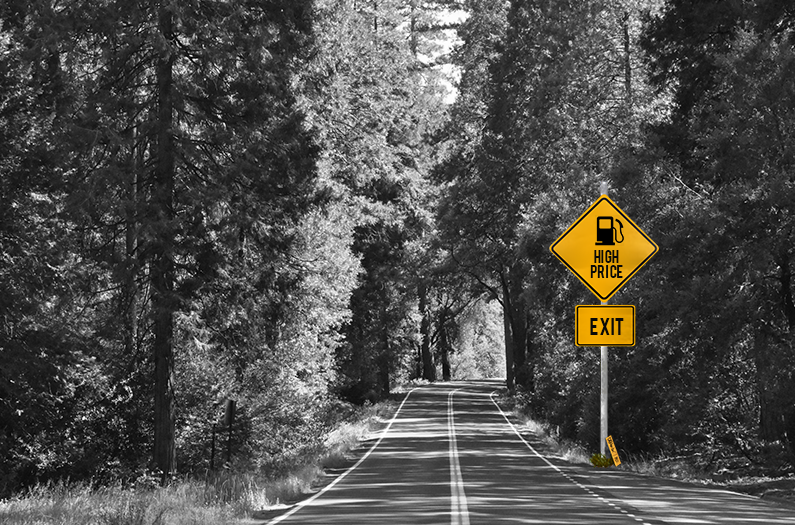 What’s driving the remarkable decline of urban sprawl in the US?

A new study finds that a primary culprit has been rising gas prices—spurring denser development in communities across the country.
By Sarah DeWeerdt
February 1, 2022

Rising gas prices prevented the development of 4.19 million acres of forest and agricultural land in the U.S. between 2000 and 2015, according to a new study. The findings enhance understanding of the dynamics underlying urban sprawl.

The rate at which forest and agricultural land has been converted to housing and urbanized landscapes increased during the 1980s and 1990s, but began declining around 2000, the study revealed. “U.S. land development rates rapidly came down after the year 2000, which meant that development has become increasingly denser in recent years,” says study team member Daniel Bigelow, an economist at Montana State University in Bozeman.

Other studies have hinted at this trend, but haven’t examined the causes & consequences in detail. To fill out the picture, Bigelow and his colleagues used data from a federal database to track how land use has changed from 1982-2015 in each county of the 48 contiguous U.S. states.

After falling during the 2000s, the rate of land development stabilized around 2010 at a rate about one-quarter of its peak in the late 1990s, the researchers report in the journal Environmental Research Letters.

The researchers also simulated what the landscape would have looked like if high land development rates had continued. Overall, the slowdown in land conversion spared 7 million acres of forest and agricultural land from development between 2000 and 2015, they showed.

Finally, they used a mathematical model to tease apart how three important drivers of land development – population growth, income, and commuting costs – contributed to these changing rates of land conversion. “We find that rising incomes and low gas prices helped spur the increasing development rates in the 1980s and 1990s, while rising gas prices were the largest factor that helped bring land development rates back down from 2000-2015,” Bigelow says.

The findings have an intriguing implication for climate policy: “Our results highlight an important mechanism through which a tax on carbon would discourage new development, namely by reducing incentives for people to live relatively far from their place of work,” says study team member David Lewis, an economist at Oregon State University in Corvallis. “We estimate that a $0.03/gallon annual price increase lowers land development rates by about 2.84% per year.”

In turn, this means that a carbon tax doesn’t reduce carbon emissions only by preventing the burning of fossil fuels. “Our results highlight how carbon emission pricing can mitigate climate change by preserving the carbon stored in forested lands,” says study team member Christopher Mihiar, an economist with the USDA Forest Service in Research Triangle Park, North Carolina. Figuring out the magnitude of carbon emissions avoided by changing development patterns would require further research, he says – one of several follow-up studies the team is investigating.

How the rise in remote work spurred by the coronavirus pandemic might change these patterns is another open question. “To the extent that these changes become permanent, and commuting by car becomes less common, the gas price mechanism we highlight may become less salient as it relates to the economic incentives to develop land,” Bigelow says. That could trigger a rebound in the rate of land development.

“On the other hand, gas prices have continued to remain way above what they were in the 80s/90s and have risen by roughly $1/gallon over the past year – which would raise commuting costs and keep land development rates down,” Lewis says.

And there are other changes afoot too. “Looking ahead to future land development patterns will also need to account for increased use of electric vehicles. While gas prices are the mechanism through which commuters incur commuting costs today, the future may look very different in terms of mode of transport,” Mihiar says. “Future interactions between remote work, gas price changes, commuting costs, and automobile technology will all impact how future land development patterns respond.”