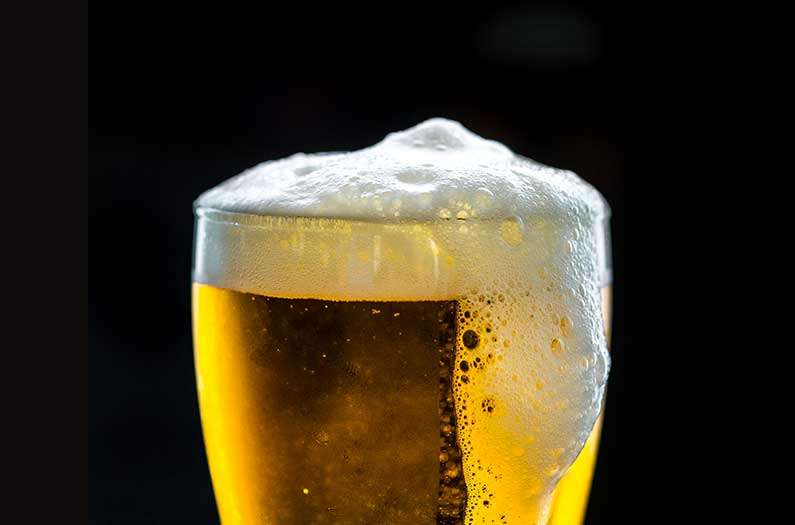 Tweaking the machinery of yeast produces a flavor compound that could substitute the resource-intensive aroma hops that beer relies on for its signature taste.
By Emma Bryce
March 25, 2022

Researchers have managed to recreate beer’s signature hoppy flavor through baker’s yeast, circumventing the resource-intensive process of growing aroma hops in a field. This could save gallons of water and carbon dioxide emissions involved in growing the crops for beer—making this favorite beverage much more sustainable, they say.

The flavor that gives beer its delectable tang arises from aroma hops that interact with alcohol to produce its taste. This process presents a particular challenge for alcohol-free beer though, because the combined heating and low-fermentation processes required to lower alcohol content disrupt the normal transfer of flavor from aroma hops to the golden liquid. This undercuts their value in the mix—and results in beer that typically tastes flat and watery.

To get around this, some manufacturers simply add aroma hops at the very last stage of alcohol-free beer production. But hops are expensive, so it’s considered a waste of money to simply sprinkle them in at the end instead of brewing them alongside the beer.

But now University of Copenhagen researchers, working for a company called EvodiaBio, think they may have found a solution with their invention. Their discovery hinges on baker’s yeast, which can be produced in large quantities inside industrial fermenters. The researchers homed in on an organelle within the yeast that’s usually involved in oxidizing fatty acids. But in this case, they used it as a vehicle to produce flavor compounds called monoterpenoids, which are present in a wide range of fruits and vegetables—and which underpin the signature flavor of aroma hops.

This artificial production has eluded researchers for years, “so it’s a game changer” according to the scientists who managed to crack the code.

It’s a breakthrough not just for innovation, but potentially also for beer’s sustainability, because it could replace the high-intensity farming of aroma hops. Producing these fragrant flowers requires large amounts of water—about 713 gallons of water per kilo, to be exact—and because they’re farmed primarily along the west coast of the United States, getting it to beer manufacturers around the world also involves energy-guzzling refrigeration and extensive transport, which hikes up beer’s carbon emissions.

On the other hand, substituting aroma hops with the space- and resource-efficient fermented yeast could reduce water use 100,000-fold, and CO2 production by 100 times per kilo of aroma produced for beer, the researchers calculate.

They set their targets on alcohol-free beer as an entry point for their new invention, because it offers an obvious solution to the flavor challenges here: simply adding in the artificially-produced aroma hops to the brewing liquid will invest alcohol-free beer with all the flavor it would have lost during production, and much more cheaply for producers, too.

Looking beyond this immediate goal, the researchers think regular beer production may also eventually be a good target for their low-impact aroma. “Long term, we hope to change the brewing industry with our method—also the production of regular beer, where the use of aroma hops is also very wasteful,” the researchers say.

They’re now hard at work, with reports that their more sustainably-brewed beer could be available as soon as October 2022—news that surely deserves a toast or two.