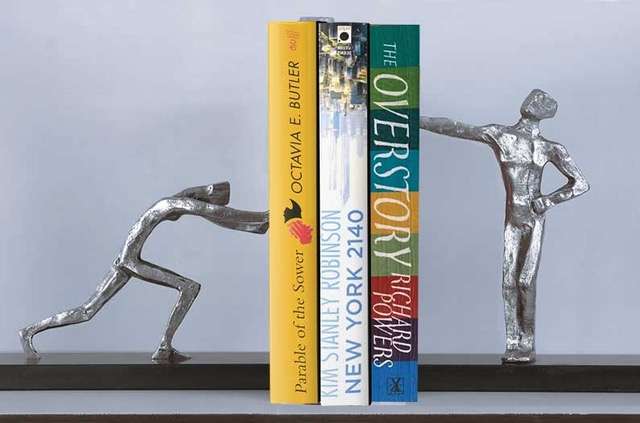 Climate stories don’t have to be depressing to be effective

A new study shows how positive stories about characters whose actions match their intentions change the minds of readers
By Sarah DeWeerdt
March 1, 2022

Stories in which characters take action with an intent to protect the climate make readers more likely to support climate policies and more likely to say they’ll take pro-environmental actions themselves, according to a new study.

The findings provide hints about how to construct climate-related stories—both fiction and nonfiction—to best reach readers. Fiction about climate change, or “cli-fi,” tends toward the dystopian, and nonfiction climate narratives often focus on victims of climate change. But that leaves out a whole set of potentially persuasive stories, the study suggests.

“Short, realistic, and personalized stories about commonplace heroes taking pro-environmental actions in their everyday lives—because they are motivated to address climate change—can resonate with people,” says study team member Ganga Shreedhar, a behavioral economist at the London School of Economics in the UK.

Shreedhar and her coauthor, Anandita Sabherwal, a London School of Economics graduate student, randomly assigned 903 adults in the UK to read one of four short stories. One described the day in a life of a protagonist who chose a vegan meal at lunch and signed a climate petition to protect the environment. Two other versions of the story described the same actions but with different motivations behind them—to gain approval from others or to improve his health. The final story was a similar day-in-the-life narrative that did not feature climate actions.

The story in which the protagonist was driven by pro-environmental intentions increased people’s support for climate policies and increased people’s willingness to take individual and collective climate action, the researchers report in the journal Scientific Reports.

People who read the story about the protagonist who acted with the intent of benefiting the environment were more likely to say they supported policies such as a carbon tax, banning fossil-fuel cars, and banning short-distance flights than those who read any of the other stories.

The intentional environmentalist narrative had greater effects in part because readers identified more strongly with the protagonist, the researchers found.

The researchers also offered study participants the opportunity to donate a portion of the £1 fee they were given for participating in the experiment to an environmental charity of their choice. But which story a person read had no effect on the amount they were willing to donate.

This may be because the story didn’t highlight charitable donations as an important environmental action, Shreedhar says. Or perhaps it takes exposure to more stories or a longer period of time to have an effect on people’s actions, rather than just their intentions. The researchers are conducting follow-up studies to explore these questions, as well as whether the audiovisual or print stories pack a bigger persuasive punch.