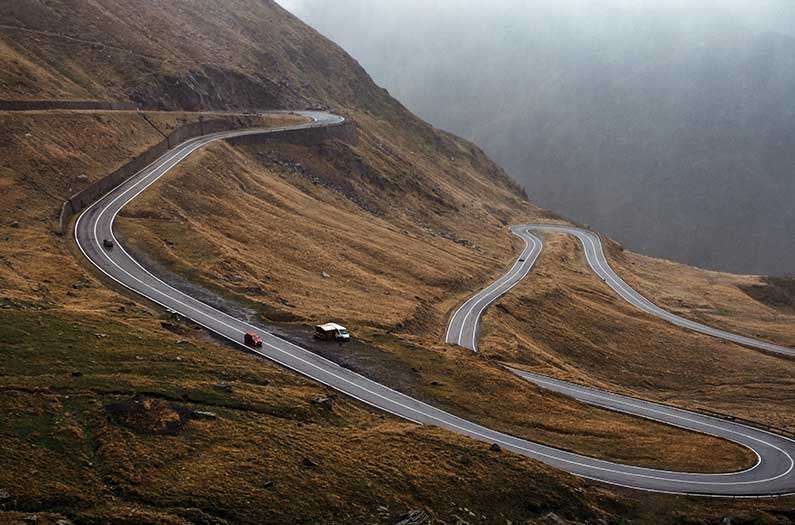 Here’s an unusual but surprisingly feasible idea: Run electric trucks downhill as an alternative to dams.

Researchers say the idea requires only existing roads, e-trucks, and small rivers; and could cost about half that of conventional hydropower.
By Prachi Patel
March 10, 2022

Hydroelectric dams are the world’s largest source of renewable electricity. But they are not necessarily green. They can upend ecosystems, displace wildlife and people, cause local droughts, and even emit greenhouse gases. Besides, they are expensive to build and can only be built in locations with the right geology.

Researchers now propose a unique idea that could get around these issues: using electric trucks as an alternative to dams. The cost of an electric truck hydropower system would turn out to be about half that of conventional hydropower, they say in a study published in the journal Energy.

So how do trucks replace dams? Dams are built across rivers, forming reservoirs behind them. When water flows down through the dam gates, the potential energy that’s stored in the reservoirs becomes mechanical energy that is used to spin turbines, which generate electricity.

The new idea “consists of using an electric truck to transport water down a mountain and transform the potential energy in the water into electricity to charge the trucks battery,” says Julian Hunt of the International Institute of Applied Systems Analysis in Austria, who led the new study.

The concept would require mountainous roads, but would work with small rivers and streams that would not be sufficient for conventional hydropower. Hunt explains that truck containers would be filled with water from rivers at the top of a mountain. It could take up to 3 hours to fill the container. When the tank is full, the truck would go downhill. The driver would need to use the brakes during the downhill ride, which would charge the truck’s battery with the regenerative braking system.

At the bottom, water from the tank would be released back into the river, and the truck’s battery would be removed to provide electricity to the local grid. Then the truck would return with an empty tank and another battery with just enough juice to get the truck up the hill.

“If electric truck hydropower is combined with cargo transportation, It could substantially reduce fuel consumption in regions with high mountains,” Hunt says. Take for example trucks that are ferrying cargo from Washington state to Pittsburgh. On the return trip, just after the trucks cross the Appalachian Mountains, their tanks could be loaded with water and they could then charge their batteries on their drive down the mountains.

If such a system could indeed be realized worldwide, Hunt and his colleagues calculate that an electric truck hydropower system could generate 1.2 petawatt-hours of energy per year, or about 4 percent of global energy consumption in 2019. The system should cost about $30–100 per megawatt-hour, they estimate. Conventional hydropower, by contrast, costs $50–200 per MWh.

The idea is unusual but feasible, especially as battery prices drop and dozens of vehicle manufacturers launching electric truck models. “Given that the cost of electric truck are expected to reduce significantly in the coming years, this is definitively something to keep an eye on,” he says. “Current advances in battery technology are opening a vast world of new possibilities. Electric truck hydropower is just one of them.”

Photo by Maria Teneva on Unsplash