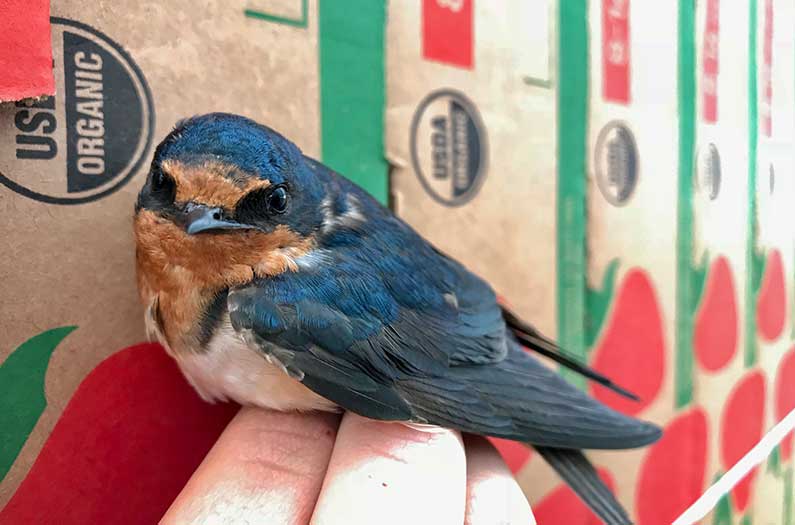 Farmers wiped out habitat to reduce disease from wildlife. For birds, their efforts backfired.

New study finds that birds caught on California farms with nearby wildlands had less problem bacteria than those at more manicured farms.
By Warren Cornwall
March 2, 2022

A deadly 2006 E. coli outbreak traced to spinach from a central California farm prompted growers there to remove meadows and woods lining their fields, amid fears they harbored disease-bearing wild animals. It turns out that strategy might have done more harm than good.

Birds at California farms with wild habitat nearby were less likely to have disease-causing microbes in their feces, while they also fed less on farmers’ crops, scientists have learned. The new findings point to potential benefits of farming alongside nature, and the ways in which strategies aimed at fending off wildlife can have unexpected consequences.

The research suggests “that farming landscapes with natural habitat tend to be good for conservation, farmers, and public health,” said Daniel Karp, an ecologist at the University of California, Davis whose lab led the work.

The 2006 incident sickened at least 204 people in 26 states and Canada, including 104 who were hospitalized. Three people died. For a time, the U.S. Food and Drug Administration recommended not eating fresh spinach. Clues eventually led federal inspectors to a 2.8-acre field in San Benito County, a farm-dotted region just south of California’s Silicon Valley. There, they found the strain of E. coli in feces from nearby cattle and wild pigs, as well as river water.

The repercussions stretched well beyond the lone farm, shaking the fresh produce industry, especially in California. Among the new food safety measures adopted in the wake of the outbreak, farmers were pressed to fence fields and remove nearby strips of wild vegetation to reduce the presence of wildlife that might carry disease.

But Karp and his fellow scientists wondered whether such measures were really having the intended effect. To find out, they focused on one type of organism known to carry disease-causing bacteria – wild birds. Farmers often have a conflicted relationship with birds. One the one hand, they dine on pesky crop-eating insects. On the other, they can feed on those same crops or beneficial insects.

To tease apart the interplay of these different forces, researchers headed to 21 organic strawberry farms in Santa Cruz and Monterey counties armed with delicate nets known as mistnets. Between 2017 and 2019, the scientists captured more than 1,000 birds from 55 species and collected fecal samples. In the lab, they sifted through the DNA in the feces, looking for clues about what insects and plants they were eating, and what germs they carried.

At the same time, the researchers built maps of the farms and surrounding land, tracing the mosaic of crops and untended vegetation they described as “semi-natural habitat.”

The results showed that what turned up in a bird’s gut depended in part on the landscape where they were caught. Birds caught at a dozen farms classified as having relatively little surrounding natural habitat were more likely to have strawberry DNA in their feces, as well as Campylobacter, a bacteria that can cause diarrhea and vomiting in people, and, in rare cases, death, according to findings reported Feb. 22 in the Journal of Applied Ecology.

The presence of natural habitat stood out statistically as the most significant factor when it came to whether the benefits of wild birds outweighed the harms, according to the researchers. “Bird communities respond to changes in the landscape,” said lead author Elissa Olimpi, who was a postdoctoral scientist at UC Davis during the research. “As birds shift in response to management, so do the costs and benefits they provide.”

While it’s not clear exactly why more nearby natural habitat could be a plus, it’s possible that these areas provide more attractive food such as seeds and insects, prompting birds to ignore strawberries. The more heavily farmed areas could also support bird communities more likely to carry or transmit disease.

Among the different species, barn swallows got a “gold star,” thanks in part to their appetite for pests. The aerial acrobats catch insects on the wing and build mud nests in the underside of roof eaves. The American goldfinch, meanwhile, was at the other end of the spectrum.

The split among species suggest that farmers could take steps to encourage more beneficial birds. In addition to letting land grow wild, people could leave barn swallow nests unmolested and build bird boxes with entry holes small enough to let insect-eating birds enter to build nests, while excluding bigger, more harmful birds such as starlings, the scientists said. “The best we can do is understand how to take advantage of the benefits while reducing the harms,” said Olimpi. “Growers will tell you it’s impossible to keep birds off your farm.”