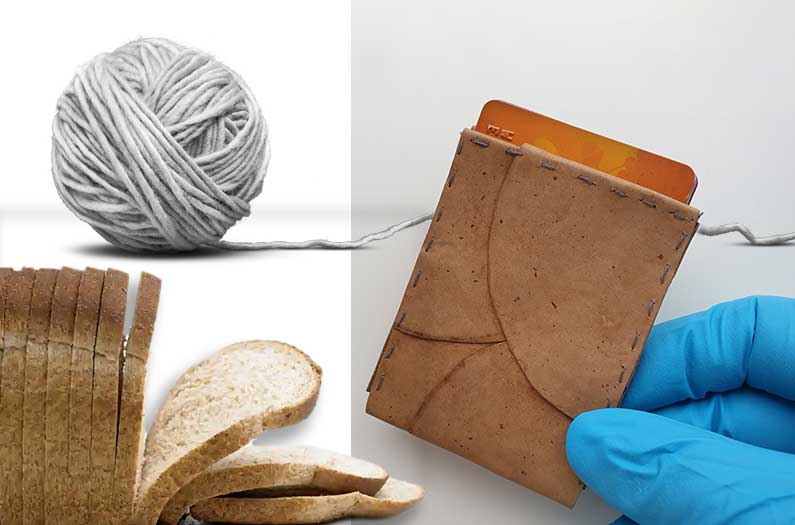 Fashion’s biggest faux pas is probably its environmental impact. The fashion industry accounts for 10% of the world’s carbon dioxide emissions, according to the United Nations Environment Programme, and it is the second-biggest consumer of water.

For a more eco-conscious fashion statement, researchers from the University of Borås in Sweden have turned to fungus. The team has harnessed a bread-eating fungus to convert food waste into materials that look and feel just like leather, cotton, and paper.

The research, presented yesterday at the American Chemical Society’s spring meeting, is an innovative solution to tackle the enormous environmental impact of both food waste and fashion pollution. Besides providing an economical use for food waste, the fungal materials will use far less water and energy than their conventional counterparts, and will be faster to make.

About a third of all food produced for human consumption ends up going to waste, and it generates greenhouse emissions as it sits rotting in landfills.

To put that waste to use, biotechnologist Akram Zamani and her colleagues turned to the filamentous fungus Rhizopus delemar that grows on decaying food matter. They collected old bread from supermarkets, and dried and crushed into breadcrumbs. Then they mixed it along with the fungus spores in water in a small reactor.

As the fungus consumed the bread, it produced microscopic natural fibers made of the proteins chitin and chitosan. These fibers accumulated in the fungal cell walls. After two days, the researchers collected the cells, and removed fats and proteins, which they say could be used to make animal feed. This left behind a jelly-like residue containing the fibrous cell walls.

The team spun this residue into yarn, which could be woven into clothing or used to make medical sutures. Treating the fibers with glycerol made them stronger and more flexible. The researchers also spread out the jelly and dried it to make paper-like material. Further, to make leather-like materials that closely mimic real animal leather, they made thicker layers which they treated with tree-derived tannins for softness.

Zamani’s team are not the first to make leather from fungi. A few sustainable, vegan leather substitutes made from mushrooms, such as the one by California-based company Mycoworks, are already on the market.

Few details on how these materials are made are available. But typically the commercial products are usually made from harvested mushrooms or from fungus grown in a thin layer on top of food waste or sawdust, she said in a press release that. That fermentation process can be time-consuming, taking days or even weeks, whereas her reactor produces the same amount of fungal material in just a couple of days.

Unlike some other fungal leathers, the new one does not contain any synthetic layers, or environmentally harmful coatings or chemicals. Plus, tests showed that its mechanical properties like density and stiffness match that of animal leather very closely.

“We hope they can replace cotton or synthetic fibers and animal leather, which can have negative environmental and ethical aspects,” Zamani said.