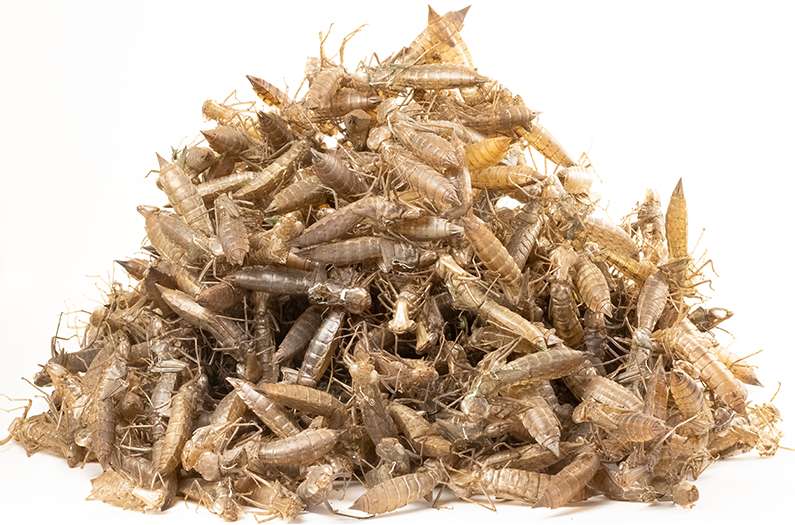 Insect farming byproducts are piling up. They could be fertilizer in a circular agricultural system.

Adding insect exoskeletons and “frass” to farm soils, researchers say, can nourish plants through a series of complex and fascinating interactions with microorganisms.
By Emma Bryce
March 11, 2022

Farmed insect protein such as mealworms, crickets, and black soldier flies offers a solution to the growing challenge of how to sustainably feed livestock: fast-growing and resource-efficient, these creatures rapidly produce tons of protein, without the costly and damaging inputs required to produce grain or grass for feed.

But along the way, they also generate a massive amount of waste—shedding tons of crispy exoskeletons called ‘exuviae’, and excreting a potent mix of feces and undigested food known as ‘frass’.

Now a group of researchers have written an opinion article arguing that we’re missing a key trick as this industry of six-legged livestock grows: we should be cycling this mountain of freely-available waste material back into the soil to grow our crops. By boosting soil health and amping up nutrients, mixing insect waste into farmland soil could even limit the need for polluting chemical fertilizers and pesticides, they say.

Writing in Trends in Plant Science, the researchers surveyed available evidence to understand how insect waste interacts with plants, and to infer what possible benefits it could bring on farms. In the first instance, insect frass is nitrogen-rich, so it follows that adding this nutritious mix to soil would provide a direct source of nutrients to plants—resulting in a “short-term pulse of plant-accessible nutrients,” the researchers explain.

But incorporating this waste into the soil could also nourish plants over the longer term, through a series of complex and fascinating interactions with microorganisms. Adding insect byproducts to farmland would boost the soil’s organic content, which fuels the growth of a rich cocktail of bacteria and others, many of which are beneficial to plants. For instance, research shows that adding mealworm exuviae to soil encourages the abundant growth of one class of particularly beneficial bacteria that set up camp in plant roots, and from there help them fight off pathogens and pests. These bacteria also aid plants by producing growth-promoting hormones and supplying them with nutrients such as iron and phosphorus.

There’s also preliminary evidence to suggest that when these nutrient-funneling bacteria are supplied with a steady stream of insect waste, they can make plants more productive by helping them produce larger, more colorful flowers for increased pollination, which therefore boosts yields.

Insect exuviae also contain a rich store of chitin, a polymer that’s known to boost soil health and to trigger plants’ inbuilt defenses against disease. Plants have trouble processing this polymer in its raw form. But the uptick of insect organic material in the soil also happens to support a range of bacteria species that will conveniently break down chitin and unlock its ingredients for crops—underscoring the simultaneous advantages that could come from fortifying agricultural soil with insect waste.

The researchers do caution that until we have more direct research, many unanswered questions remain—such as how much insect exuviae and frass is required to nourish those microorganisms and to sustain them at the levels needed to support crops.

But what evidence there is so far points promisingly to the capacity of this emerging waste stream to stimulate microbial activity, and thereby support plant growth, defenses and resilience, and possibly even jumpstart higher yields. Collectively, these benefits “may reduce the use of synthetic pesticides and fertilisers and thereby support sustainable crop production,” the researchers write.

What’s more, using insect waste could move us towards a more circular system in agriculture. One of the great attractions of using insects as feed is that they can convert nutrients into protein very efficiently, and aren’t picky about what they eat—and that includes agricultural and food waste. Insect farms could be supplied with waste, transform it into protein for livestock, and then their own waste can be cycled back onto the croplands that provide us and them with more nourishment again.

With insect farming fast-increasing, and being encouraged by supportive legislation in regions including the European Union, it’s likely those crunchy waste streams are only going to grow—and with it, the opportunity to embrace the closed-loop systems that agriculture really needs, the researchers say.