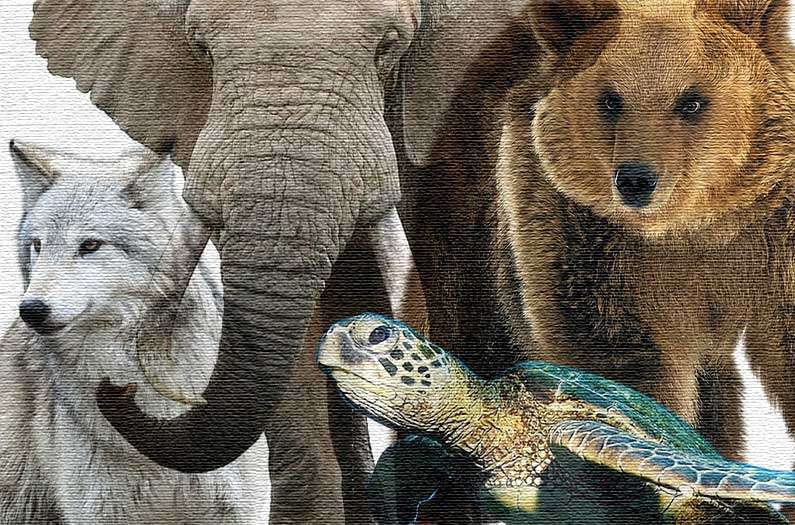 Large animals could be big allies in the fight against climate change, according to a new analysis.

Most studies on natural solutions to climate change focus on plants and soils because of their role in pulling carbon dioxide out of the atmosphere and storing carbon, often for the long term. Meanwhile, animal conservation efforts emphasize the importance of conserving large charismatic species both for their own sake and to preserve their keystone roles in ecosystems.

In the new study, researchers surveyed the scientific literature in an attempt to to bring these two strands of environmental action together: are there cases where conservation of large animals would benefit the climate, too?

Unlike plants, animals store only a negligible amount of carbon in their bodies. In total, all of the world’s wild animals from jellyfish to beetles to blue whales contain carbon equivalent to about two month’s worth of fossil fuel emissions. Wild mammals and birds contain a mere eight minutes’ worth.

Instead, animals can have an impact on the climate by modifying plant communities and affecting carbon stocks in plants, soils, and ocean sediments, the researchers report in the journal Current Biology. Herbivores are responsible for most of these effects—plant-eating animals such as elephants, rhinoceroses, zebras, giraffes, bison, and moose.

Animals’ climate effects are as diverse and various as animals themselves, and can often run in both directions. For example, the presence of herbivores can increase emissions of methane, a powerful greenhouse gas, from soils that are swampy year-round, but decrease methane emissions from soils that are only waterlogged for part of the year. And many grazing animals themselves release methane in their burps and farts (albeit much less in total than domesticated cows and sheep, which are far more numerous).

To really make a difference to the climate, animals’ effects have to operate across whole ecosystems or even at a global scale. The researchers zeroed in on three large-scale, beneficial climate effects of animals gleaned from their research:

First, large herbivores can increase carbon stocks in the soil, roots, and above-ground parts of plants. They do this by dispersing seeds, clearing vegetation, and fertilizing the soil as they graze.

Second, their activities can increase the Earth’s albedo—the amount of solar radiation that is reflected back into the atmosphere. Paler areas have higher albedo and reflect more radiation, which has a cooling effect. When grazing animals move across the landscape, they trample vegetation and shift plant communities from dense shrubs and trees to open grassland or a mix of grassland and shrubs. They also expose patches of bare snow in polar regions.

Finally, they can lessen catastrophic wildfires by eating woody vegetation and thereby reducing fuel loads, as well as trampling paths in the vegetation that form firebreaks.

The researchers also identified three biomes in which animals have the most prominent climate-protecting effects. In grasslands—from the tropics to temperate areas—large animals have all three of the above roles: they reduce fires, increase albedo, and help the vegetation and soil store more carbon.

In tundras, large herbivores keep woody plants at bay and expose more of the ground to cold, which in turn maintains permafrost and prevents the release of soil carbon. “Overall, the tundra biome shows some of the strongest climate change mitigation and adaptation effects from large animal wildlife,” the researchers write.

And in the oceans, large animals such as whales fertilize phytoplankton, microscopic plants that are the base of the ocean food chain. Phytoplankton captures carbon dioxide, and creates aerosol particles that reduce atmospheric albedo and therefore have a cooling effect.

More research is need on the climate effect of animals on soils and in the deep oceans, the researchers say.