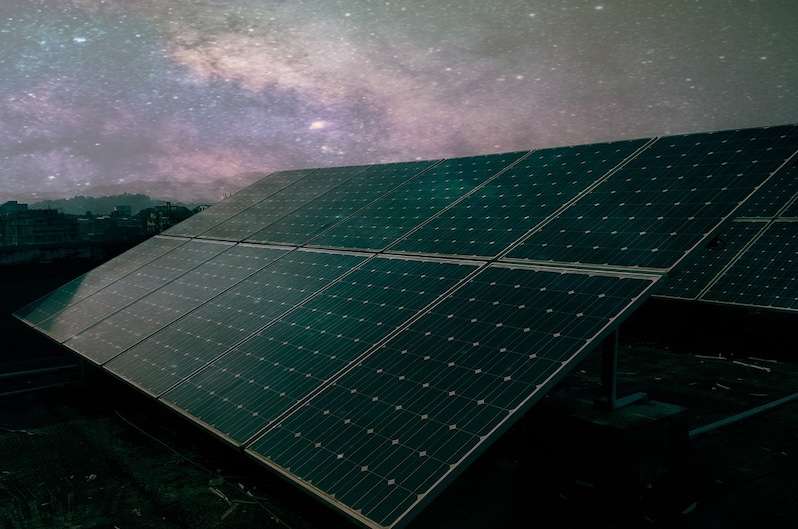 Engineers have made solar cells produce electricity at night

It's enough power to keep LED lightbulbs on or charge phones at night, and could offset the need for expensive batteries
By Prachi Patel
April 21, 2022

One big limitation of solar power, of course, is that solar panels don’t work once the sun goes down. Researchers at Stanford University have now overcome that limitation. By modifying commercially available solar cells, they have made ones that can create enough electricity at night to charge a cell phone or power LED lights.

“We wanted to really expand the operating range in time of solar cells,” says professor of electrical engineering Shanhui Fan, who published the work in Applied Physics Letters.

Solar cells are made of materials such as silicon that absorb sunlight and produce charge carriers that lead to a flow of electric current. They also warm up during the day as they absorb sunlight. And then at night, as they face the dark sky, they radiate this heat back into space. This phenomenon is called radiative cooling, and researchers have tapped it to make reflective cooling paints, materials, and building cooling systems.

Fan and colleagues have harnessed this phenomenon to make a device that generates enough power for LED lightbulbs, which they reported in 2019. They have now integrated this idea with solar cells.

In tests on a Stanford rooftop, the device produced an average of 50 milliwatts per square meter. That’s not a big amount of power compared to the 100 Watts per square meter solar cells produce during the day, Fan says, but it would be enough for a backup source of power in off-grid or low-resource locations. Plus, it could work out to be more affordable and longer lasting than using a battery to store solar power produced during the day.

Fan says that by further improving the insulation and thermoelectric setup, and engineering the solar cell so they radiate more heat without sacrificing their sunlight-harnessing ability, they could squeeze more nighttime electricity from the system. Theoretically, up to 1 Watt per square meter should be possible.