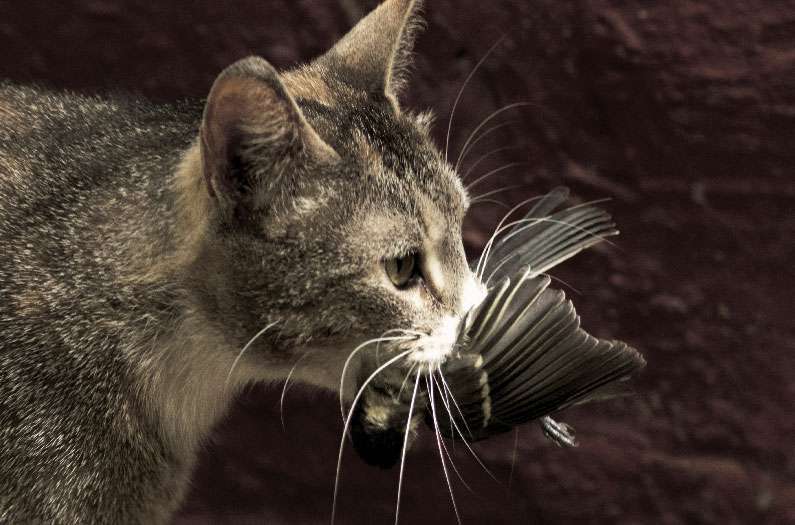 How to get cats to eat pests instead of songbirds

Creating "cat-free" zones in wooded parts of cities could blunt their impact on wildlife, and enlist them in the battle against rats, say scientists.
By Warren Cornwall
April 20, 2022

The eating habits of cats have long been a source of comedy for their owners and the general public, from Garfield’s love of lasagna to Sylvester’s doomed pursuits of Tweety Bird.

But for people worried about wildlife conservation, domestic cats are no laughing matter. Set loose to roam back yards and residential neighborhoods, that cute tabby is a killing machine. By one estimate, outdoor cats, both pets and feral animals, kill as many as 4 billion birds and 22 billion mammals in the U.S. each year. That makes them possibly the country’s largest source of human-caused wildlife deaths.

Proposals to tackle the problem have included poisoning or shooting feral cats, neutering them to slow population growth, and bans on feeding strays or letting pet cats wander outdoors. But blanket crackdowns on outdoor cats are controversial and hard to enforce, and researchers have found that 75% of free-ranging males would need to be neutered to control feral cat numbers.

Now, a group of researchers who tracked the hunting behavior of Washington, D.C. felines say a more nuanced approach could stem the wildlife carnage, while enlisting cats in the fight against urban pests such as rats.

To learn how outdoor cats really hunt, the scientists stationed cat-height cameras triggered by movement at more than 1,500 places around Washington, D.C. between 2018 and 2020. They captured more than 33,000 encounters with cats, including 73 instances of a cat carrying its prey.

Overall, the death toll in the photos tilted toward invasive pests: 34 rats, nine house mice, a dozen cases where the images weren’t clear enough, and a smattering of squirrels, native songbirds and a snake.

Herrera and colleagues matched the species and location of those 73 kills with data about different parts of the city: how forested or paved nearby areas were, and how many people in an area fed cats outdoors (based on a citywide survey).

The results showed that neighborhoods near woods were the deadliest spots for native wildlife. In areas with more concrete and less greenery, cats’ appetites turned to rats. In addition, the death toll was higher in places where people fed outdoor cats.

If outdoor cats were banished from within a kilometer from forested areas, virtually no native wildlife would die, the researchers report in the journal Biological Conservation. Cut that “no cat zone” to a quarter of a kilometer, and native species would account for roughly half of the prey.

The research was funded by several animal and pet advocacy groups, including the American Society for the Prevention of Cruelty to Animals, The Humane Society of the United States and Humane Rescue Alliance.

As a compromise solution, the scientists hit on a 425-meter buffer zone free of outdoor cats around wooded areas. That would cover tree-lined streets near Washington, D.C.’s borders while leaving much of central city open to free-range cats. Because a cat’s territory typically covers around two blocks, a buffer that size means native animals would account for approximately 25% of their kills, while rats would account for more than a quarter of the deaths, according to the new research.

How to keep outdoor areas near forests cat free? The scientists point to several options. Those include fining cat owners who let their animals outdoors in those zones, banning outdoor feeding, “removal” of free-range cats, not releasing neutered wild cats there, or banning cats altogether in those places.

Given differences from one city to another “a universal solution is not possible,” they write. However, an approach targeting just part of a city could be a “more effective way to protect wildlife,” they say.

On the other hand, given how heated conversations get when it comes to people’s pets, reaching an agreement in Washington, D.C. and elsewhere might, as the saying goes, be like herding cats.