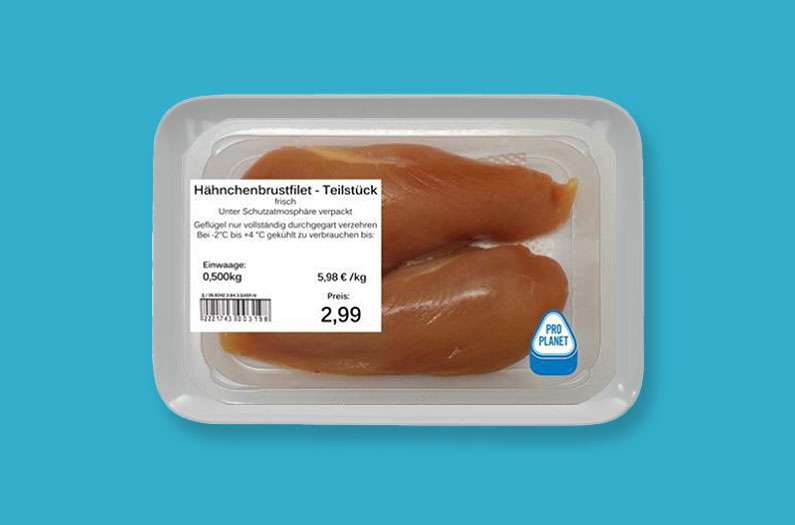 Meat from chickens raised on insects or algae has a distinct color. So how best to market it?

A new study finds that for environmentally-minded consumers more information is better. For everyone else, the opposite is true.
By Emma Bryce
April 22, 2022

Chicken is now the most commonly-consumed land animal in the world, generating 790 million tons of carbon dioxide emissions a year. One way to make it more sustainable is to switch up its high-impact soybean feed for more sustainable protein sources, like algae and insects.

But a group of researchers show that marketing the sustainability attributes of this insect- and algae-fed chicken could be a “double-edged sword”—encouraging uptake in environmentally-minded consumers, while driving others away.

Since livestock fed with alternative proteins is a fast-approaching reality, this holds important lessons for how to make these more sustainable meats palatable to the average consumer.

Nutritionally-similar to soybeans, fast-growing algae and insects offer the benefit of decoupling feed production from the land. Yet these more sustainable attributes come with a trade off: algae and insect meal give chicken meat a slightly alarming, reddish-yellow hue.

There’s no use in trying to hide the change; the best approach would be to tell consumers why the chicken looks the way it does. And the researchers on the new study were curious whether this could be an opportunity to persuade chicken-lovers to choose more sustainably-fed meat.

In their social study, they presented over 1000 German consumers with pictures of chicken breasts, some of which had been fed conventional meals, and some of which were nourished with spirulina algae, or larvae of the blackfly—and which therefore varied in color. Half the consumer group received straightforward information about the effects of the feed on the hue of the meat. The entire group also received information about the health and environmental attributes of each type of feed.

The survey revealed a noticeable split in how much consumers favored the algae- and insect-fed chicken: those who identified as environmentally-minded at the outset of the study were more likely to select and be willing to pay for the more sustainably-nourished chicken, with a stronger preference for birds fed with insects (and whose meat has a hue more similar to that of regular chickens.) “Environmentally conscious consumers are most likely to seek insect fed meat when given a chance to select such products,” the researchers observe.

However, the opposite was true in consumers who expressed less interest in sustainability: these individuals tended to react negatively to any information about the feed sources, ultimately opting not to purchase the alternatively-fed chicken when given a choice. In these cases, “information has the likely effect of bringing up associations of disgust and rejection that dominate segments of western consumers’ perceptions around insect or algae derived foods,” the researchers write.

How can these findings be put to use? In the first instance they suggest that identifying as environmentally-conscious has a powerful priming effect on the choices that consumers make. And the good news is that we can appeal to the subset of consumers with these environmental sensibilities, to grow a market for more sustainable meat, the researchers believe.

On the other hand, we need to find new ways to bring more reticent consumers on side—perhaps with taste tests, the researchers suggest, to override the powerful effect that visuals have on human perception—and especially since the study found that 70% of its participants said color was key in informing which chicken breast they chose.

As the alternative feed market grows, and policies start to evolve around it, it’s important to have concrete information to inform these—especially around the labeling of these products, to ensure they target consumers in the right way.

“Producers need to get the labeling sorted out as these feeds are developed,” the researchers write. “If you want consumers to believe in these alternative products, you have to educate them about it, then they can decide.”