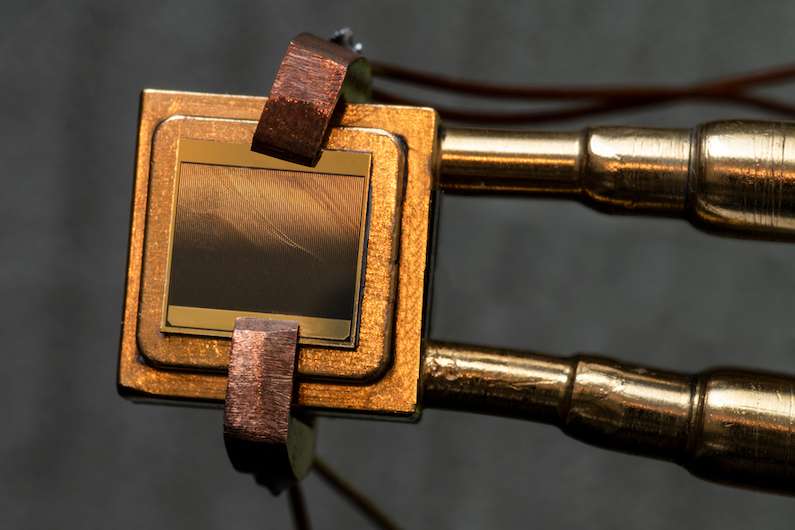 With no moving parts, the solar cell-like device generates heat from electricity with a record-breaking efficiency higher than that of steam turbines
By Prachi Patel
April 28, 2022

Most of the world’s electricity today is produced by burning coal or natural gas to boil water and create steam for spinning turbines. In a paper published in Nature, researchers have now reported a solid-state device with no moving parts that can convert heat into electricity with an efficiency higher than that of steam turbines.

The breakthrough could lead to an affordable and low-maintenance thermal battery system for storing renewable energy on the grid.

The new device, which its developers at MIT and the National Renewable Energy Laboratory call a heat engine, is a thermophotovoltaic (TPV) cell. Just like solar cells convert sunlight into electricity, TPV cells are made of materials that can convert infrared radiation from heat sources into electricity. The efficiency of these cells so far has hovered around 32 percent because they operate at lower temperatures.

By combining two different metal alloy layers, the researchers have made a device that harnesses heat from white-hot sources at temperatures of 1,900 to 2,400 °C. The top layer absorbs the highest-energy infrared waves, while the lower layer captures lower-energy radiation. A mirror at the bottom of the device reflects any unabsorbed heat back to the heat source so that it can be reused.

A 1cm x 1cm prototype device made by the researchers was able to produce electricity with 40 percent efficiency. By contrast, the average steam turbine has an efficiency of around 35 percent.

With better reflectors the TPV efficiency could go up to 50 percent, the team says. Plus, what gives TPVs added advantage over steam engines is also “the potential for lower cost, faster response times, lower maintenance, ease of integration with external heat sources and fuel flexibility.”

“One of the advantages of solid-state energy converters are that they can operate at higher temperatures with lower maintenance costs because they have no moving parts,” said MIT mechanical engineering professor Asegun Henry in a press release. “They just sit there and reliably generate electricity.”

For a grid-scale thermal battery, the team envisions a system in which surplus electricity from wind or solar farms could be stored in insulated banks of materials such as graphite. When the grid needs power, TPVs could convert the stored heat into electricity and send it to the grid.

Such a large-scale system would need TPV cells that are 10,000 square feet in size, or about a quarter of a football field. But Henry points out that the existing infrastructure for making large-scale photovoltaic cells could be adapted to manufacture TPVs.