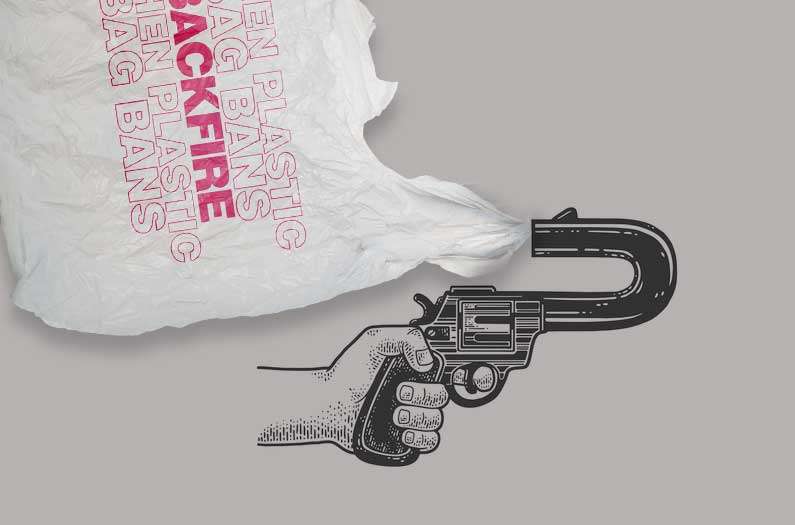 Plastic bag bans and fees can have unintended consequences

Deprived of a source of free garbage bags, people simply buy them.
By Sarah DeWeerdt
April 5, 2022

When communities ban plastic grocery bags or charge fees for their use, local stores sell more plastic garbage bags, according to a new study.

The reason for this is that people often reuse plastic grocery bags as trash can liners; when the free source of such bags goes away, people seek out purchased substitutes. The findings add to a growing body of research demonstrating that policies designed to reduce plastic waste can have unintended consequences that erode their effectiveness.

“However, even with this unintentional policy effect, it doesn’t mean that the regulations are bad,” says study team member Yu-Kai Huang, a postdoctoral researcher at the University of Georgia in Athens. “The overall plastic use just doesn’t go down by the full amount of the plastic bags that are eliminated by the regulations.”

Over the last 20 years, many jurisdictions have implemented plastic bag bans and fees in response to increasing concerns about plastic waste. Such policies have been shown to reduce the use of single-use plastic grocery bags, increase reusable bag use, and boost pro-environmental attitudes among the local population.

Past studies have also shown that plastic bag bans can spur an increase in sales of small plastic garbage bags. The new study confirms those results, and by analyzing the effect of both bans and fees offers a more comprehensive assessment of the policies.

Huang and Richard Woodward, an economist at Texas A&M University in College Station, used retail store scanner data to track sales of plastic garbage bags at stores in four jurisdictions: Washington, D.C., and Montgomery County, Maryland, which charge $0.05 per paper or plastic bag, and San Luis Obispo County and Santa Clara County, both in California, which have banned plastic grocery bags. They researchers compared garbage bag sales in these counties to sales in a composite of counties without such policies.

Sales of 13-gallon bags remained steady – which adds heft to the results, since these larger bags wouldn’t be a very good substitute for small plastic grocery bags.

The effect of bag fees on plastic garbage bag sales is similar to that of bag bans. That’s somewhat surprising, the researchers say, since the per-bag fee of $0.05 is less than the average price per bag of purchased plastic garbage bags at $0.06.

But the researchers also calculated that at high-volume stores that gave away at least 326 plastic grocery bags per day or 9,769 per month, the bag bans or fees would reduce the total amount of plastic waste sent to the landfill.

Aside from what kind of bags people use to contain their trash, another policy approach that can reduce overall waste generation is to charge a per-bag fee for trash disposal, Huang says. Studies have shown that this approach can promote recycling and reduce the amount of waste sent to the landfill, especially in the longer term.