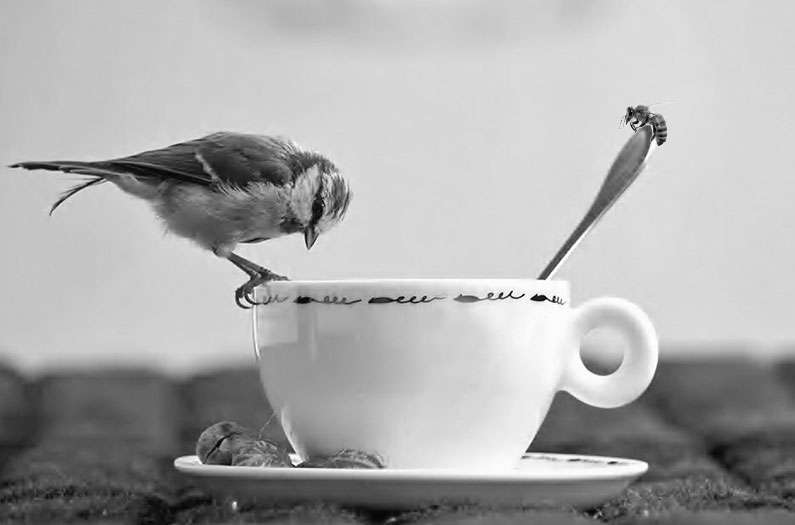 Sometimes the birds and bees are about something more important than sex. Coffee.

In a ground-breaking study, scientists reveal how the combined power of biodiversity—in this case, pest control and pollination services—is greater than individual ecological services.
By Warren Cornwall
April 13, 2022

You might be jumpstarting your brain with that first morning sip. But by the second cup of coffee, perhaps you’re ready to reflect on some of the forces that help make a tropical fruit into a $24 billion export crop connecting modest farms in places like Costa Rica with suburban U.S. kitchens.

It turns out that both birds and bees can play important parts in ensuring a bountiful coffee harvest. And, like superheroes that team up, their combined power is greater than either one alone, scientists are learning. In other words, biodiversity can affect your latte.

It’s no secret that organisms can help as well as harm agricultural crops. Boll weevils dine on cotton. Ladybugs feast on pesky aphids. The lists of predator and prey in various food webs that include plants grown by farmers is seemingly endless. In the case of coffee, bees can help pollinate the white flowers that eventually turn into the coffee fruit, a sweet-tasting dark yellow or red globe much like a cranberry that encases two coffee beans. Insect-eating birds, meanwhile, help control problems such as the coffee berry borer (say that 10 times fast), a tiny, black oblong-shaped bug that drills holes in coffee fruit and lays its eggs in the seeds.

Less, however, is known about how the presence of these two types of players—pollinators and pest-controllers—combines to affect the fate of a crop. Scientists have typically measured the effects one organism at a time. But in the real world, all these creatures are at work simultaneously. They could conflict with each other and reduce the overall benefits, work in ways so separate that there is little interaction or overlap so that the gains are greater than the two alone.

“Until now, researchers have typically calculated the benefits of nature separately, and then simply added them up,” says Alejandra Martínez-Salinas, a researcher with the Costa Rica-based Tropical Agricultural Research and Higher Education Center (CATIE). “But nature is an interacting system, full of important synergies and trade-offs.”

Martínez-Salinas teamed up with other scientists at CATIE and the University of Vermont to better understand how these different forces affected the fate of coffee and to quantify the benefits of a more complete ecosystem with both birds and bees at a time when industrial-scale coffee farming threatens biodiversity.

In 2019, the researchers visited 30 small coffee farms in the central mountains of Costa Rica. At each farm they selected eight plants for observation. They enclosed four coffee plants in mesh cages with gaps large enough to let in bees, while excluding birds. On each of the plants, during the flowering season they enclosed some branches in mesh bags that kept out both birds and pollinators.

As the year passed, they tracked the fate of the coffee fruit on branches on each tree. They counted how many flowers turned into fruit, how heavy each cherry was, and how many of them had holes made by berry borers.

By the end of the growing season, coffee plants bore evidence that the combination of birds and bees were, in several ways, more beneficial than each type of organism on its own. The proportion of flowers turning into fruit increased from 50% to 62% on branches that both birds and bees could reach, while the flowers in bushes open only to bees had 56% of flowers produce fruit. The birds alone had no measurable effect on the fruit formation, according to results published April 4 in the Proceedings of the National Academy of Sciences.

That synergy showed up in other ways. The individual coffee fruit weighed more on branches that could be reached by birds and bees. And the fruits were a more uniform weight—a measure of coffee quality—when birds and bees were present, but not when either one was acting alone. “These positive interactions mean ecosystem services are more valuable together than separately,” said Taylor Ricketts, an ecologist at the University of Vermont’s Gund Institute for Environment, who took part in the study.

It’s not clear exactly how that’s happening. While bees are the primary pollinators, it’s possible that when birds controlled beetle infestations, the flowers that were more attractive to bees or the plant was able to commit more resources to making fruit, rather than fighting off insects, according to the researchers. Likewise, although bees don’t directly interact with the beetles, it’s possible that fruits produced from cross-pollination are more robust and able to fend off beetles with chemical defenses.

These effects can translate into economic gains for farmers. The exclusion of birds and bees together reduced overall yield by 24.7%, the equivalent of $1066 per hectare. Oddly, that’s not much more than the financial benefits just gained from the pollinators. The scientists estimated that removing the bees alone would cut the yield by 24.5%. No explanation was offered for why the combined benefits of birds and bees in some measures didn’t translate into more money.