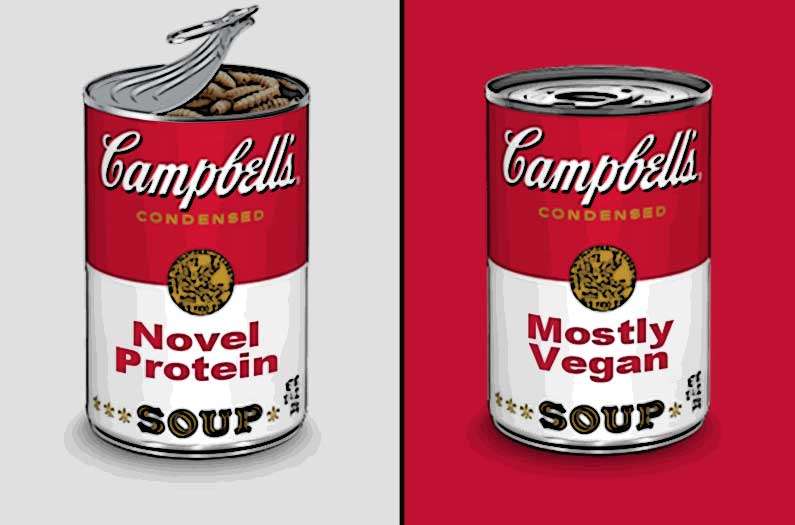 So-called ‘novel foods’ such as insect powder and algae are increasingly being touted for their environmental and health benefits. Now a new study finds that if widely adopted, these ‘future foods’ could indeed dramatically cut the global warming potential of European diets, while fulfilling key nutritional needs.

But, the new analysis also suggests that such diets may just be a more complicated and risky route to achieving climate targets we already know we can largely reach with just one key dietary change: reducing the amount of meat we consume.

The researchers, writing in Nature Food, explain how they created a model combining varied diet types—including diets rich in animal-sourced foods, vegan foods, plant-based proteins like tofu and meat substitutes, and ‘novel foods’ — to determine the optimal dietary combination for environmental and nutritional benefits. ‘Novel food’ diets include farmed insects, protein made from fungus and microbes, farmed seaweed, nutrient-rich powders made from blue-green algae, and cell-cultured foods such as meat, milk and eggs that would be grown in vats, independently of chickens and cows.

The boon of these new and developing foods is that they can be produced efficiently in limited space, taking strain off the land and water resources, and generating far less in the way of greenhouse gasses.

When researchers tallied up the water-use, land-use, and emissions impact of optimized diets, the benefits of these novel foods clearly shone through. Incorporating ‘future foods’ in European diets, together with plant-based replacements for animal proteins, could reduce water-use, land-use and the global warming potential of these diets by more than 80%.

Specifically including insect meal, cultured milk, and microbial protein provided the best balance of trade-offs between nutritional content and environmental impact, the researchers found. And, the contributing benefits of novel foods was significant: most of the water-use and land use impacts of the optimized diets came from the plant-based alternatives that featured in it, not from the novel foods.

In fact, when novel food diets were parceled out and their impact independently modeled, their benefits came out consistently higher than other dietary options in the model—reducing global warming potential by 83%, water-use by 85%, and land-use by 87% compared to current European diets. Depending on what was being measured, novel foods could be between 4 and 34% less impactful than omnivorous and vegan diets (except when it came to global warming potential, where veganism trumped the benefits of novel foods.)

Novel foods are also more nutrient-dense, and therefore may be efficient than other plant based options at providing key nutrition. They could also prove more climate-resilient, shielded as many are from the elements out on the field.

But while these numbers are impressive, they’re actually not that far off the benefits that could be achieved by simply reducing the share of meat and dairy in European diets—a task that would  currently be much easier to accomplish than getting people to adopt totally new foods. The researchers calculated that limiting meat consumption alone could reduce the impact of European eating habits by 60%.

Novel foods may bring greater benefits for the environment, but these must be weighed up against the realities of adoption. To the average person, milk cultured in vats, and flours made from ground insects, are not currently palatable options for saving the planet—whereas plant-based alternatives like mushroom burgers and soy proteins, which are becoming increasingly familiar to consumers, might hold more appeal and therefore greater potential to move current diets in the right direction. That’s not to mention the regulatory and policy hurdles that still lie ahead in getting many novel foods to market.

Yet, these foods evidently hold great potential benefits for the climate and planet that we should not overlook, the researchers says—calling for more investments to increase their share in our diets.

In the meantime, a lot can be achieved by including more plants and more variety, and crucially, moderating the consumption of animal-based foods. The researchers calculate that an average European diet that mainly incorporates plant based foods, together with a small amount of novel food items, and even a small share of certain animal-sourced foods, could lower environmental impacts to levels equivalent to an optimized vegan diet. “Diets  could  be  more  land,  water  and  carbon  efficient  if  people  would  be  amenable  to  more  abstemious  consumption,” the researchers write.

In other words, dietary change doesn’t need to be extreme to achieve something real—and while ground insects, cultured milk, and seaweed may well be part of our food futures, we already have good options, right now. “The real take-home message is we have food pathways forward,” the researchers say.

Mazac et. al. “Incorporation of novel foods in European diets can reduce global warming potential, water use and land use by over 80%.” Nature Food. 2022.