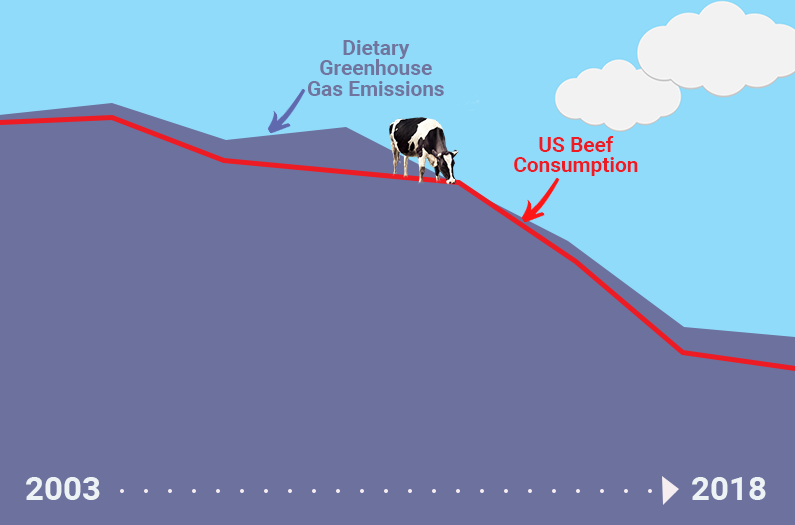 US citizens are eating less animal-based products—and that's driven a 35% decrease in dietary carbon emissions over 15 years.
By Emma Bryce
May 20, 2022

A gradually waning appetite for meat over the past twenty years has pushed the greenhouse gas emissions of US diets down by 35%, finds a surprising and hopeful new study.

The country’s emissions still far exceed the suggested national limit to keep global temperatures in line with the Paris Agreement. But the results of the new research suggest that tapping into this emerging sustainable consumption trend could be one promising route to help the US reach its climate targets.

By using data from a national dietary survey of US adults between 2003 and 2018, and conducting a life cycle analysis on the reported foods, the researchers found that the diet-related greenhouse gas emissions of US citizens almost halved, falling from 4 kilograms of CO2 equivalent to 2.45 kg CO2e over the 15 year study period.

The main reason for this decline emerged clearly in the data: over this same period, daily beef consumption plummeted by an average 40% per person, which accounted for nearly half of the diet-related dip in emissions. But it wasn’t just beef: the data showed a slow shift away from all animal-based foods, including dairy, eggs, chicken, and pork—all of which US citizens gradually consumed less of in 2018 than 2003.

This overall shift away from meat occurred slowly but steadily: on average, the food-related carbon footprint of US consumers declined by 127 grams each year of the study period.

Despite these considerable dietary changes, the amount of calories that US citizens consumed didn’t change noticeably, suggesting that the new dietary trend away from meat hasn’t caused a nutritional deficit. Rather, it seems that the emissions-intensity of food items has declined over time, perhaps as more people have switched from meat to plant-based proteins — which chimes with the decline in consumption of animal-based foods.

In fact, in separate research, the US Department of Agriculture has found that the consumption of foods like legumes and corn has increased in recent years, which might explain how caloric intake have remained stable against declining emissions.

The researchers also revealed some demographic differences in how people consume — most notably that Black women had the smallest dietary footprint by far, sitting at 20% below the national average. On the opposite end of the scale, men had an emissions footprint that was on average 10% larger than women’s, even after accounting for their greater caloric intake. In particular, men aged 35 to 49 had the highest dietary footprint overall, suggesting that this group could be ripe for targeted dietary interventions to bring national emissions down.

The overall decline in diet-related emissions is cause for optimism. Though unfortunately it still doesn’t put the US on track to meet its climate targets. The fact is that consumption—especially of meat—is still comparatively so high in the US, that even the major dent of recent years hasn’t been enough to bring diets in line with climate goals.

In further analysis, the researchers found that the emissions of the current average US diet still exceeds, by two-fold, the limits imposed by the EAT-Lancet Planetary Diet, which is globally recommended for a more sustainable food system.

Yet with its 15-year snapshot of US diets and declining emissions, the study suggests the groundwork has been laid to push even further diet-related change in the US—starting with reducing beef consumption even more, and embracing the growing appetite for plant-based foods.

Ultimately, the scale of the challenge may also represent the greatest opportunity: “GHG trends in the U.S. diet are both exceeding planetary boundaries and capable of substantial impact reduction through changes in dietary patterns,” the researchers write.