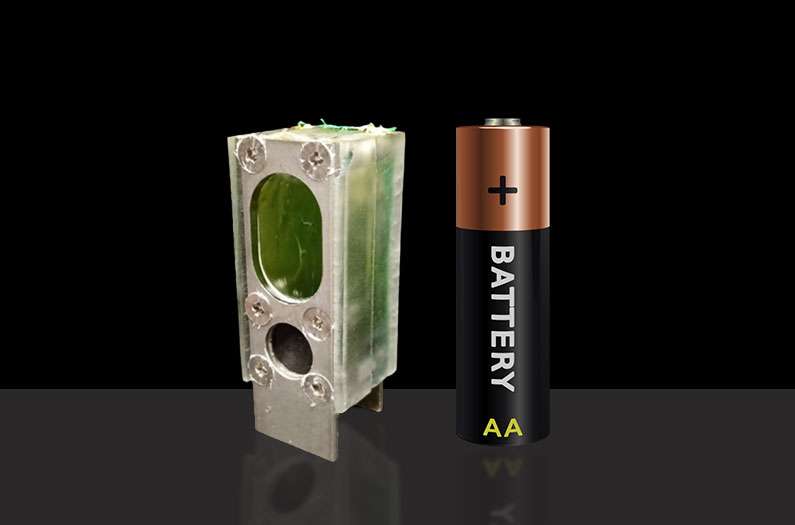 Made of common, inexpensive, and non-toxic materials, an algae-powered battery could be a sustainable option for powering electronics
By Prachi Patel
May 19, 2022

A battery-like device that runs on algae, light, and water can power a microprocessor chip—the brains of a computer—for up to a year, researchers report in a new study. About the size of a AA battery, the new device is built using “common, durable, inexpensive and largely recyclable materials,” they write.

It also does not need to be recharged like a conventional battery would. As long as the sun is shining, the algae soak it up and produce electricity. And this powers the computer chip for a while even in the dark as the algae continues to process their food and produce energy.

Algae have become promising players in efforts to thwart climate change. Just like plants, they absorb carbon dioxide and produce sugars via photosynthesis. Developers are exploring algae as a source of vegetarian protein and of oil that could be used to make biofuels or replace environmentally damaging palm oil. Researchers have also made carbon-capturing materials using algae.

In the new work published in Energy & Environmental Science, researchers at Cambridge University harnessed algae’s ability to produce electricity during photosynthesis. They put blue-green algae, also called cyanobacteria, into a see-through case made of plastic and aluminum. Then they placed it on a windowsill and connected it to the microprocessor, which they had programmed to run for cycles of 45 minutes followed by 15 minutes of rest.

The algae device powered the chip for six months leading up to the researchers submitting their paper for publication, and kept on producing power for over six months after that.

“We were impressed by how consistently the system worked over a long period of time,” Paolo Bombelli, a biochemistry researcher at Cambridge and lead author of the paper said in a press release. “We thought it might stop after a few weeks but it just kept going,”

The algae battery does not produce enough electricity to power homes. But it’s a sustainable and affordable option for rural or remote off-grid areas to charge phones and other small portable electronics.

Another use could be for smaller sensors that will be embedded into smart devices of the future. Several billion of these Internet of Things devices already exist, and that number is expected to rise to one trillion by 2035, the researchers write. “Powering one trillion IoT devices by lithium-ion batteries, would require 109000 [metric tons] of lithium, three times more than the world’s annual production in 2017, which is not sustainable.”