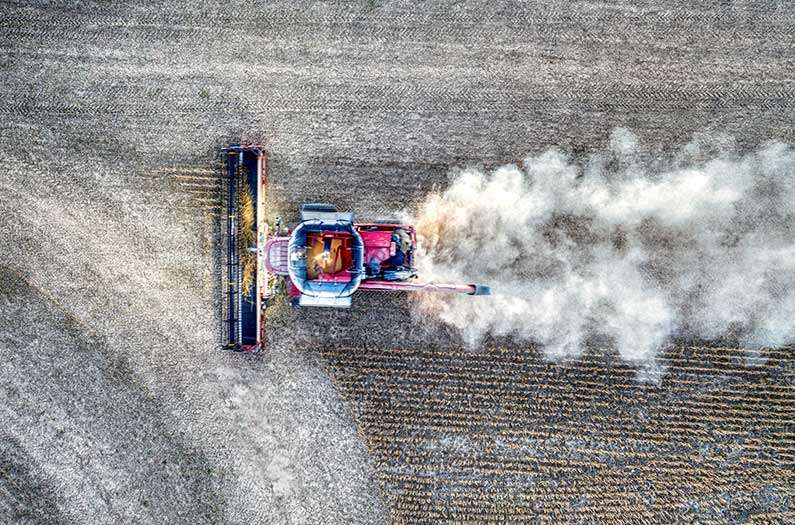 A new study estimates that the low-tech method could capture almost half the carbon the UK needs to meet its climate goals—while also replenishing its agricultural soils.
By Emma Bryce
May 13, 2022

The simple act of sprinkling rock dust—an abundant byproduct of mining—on farmland could capture 45% percent of the carbon dioxide required to help the UK meet its 2050 net-zero targets.

This new figure from a recent study adds to a growing body of evidence looking at the power of minerals to draw down carbon, while also replenishing agricultural soils.

In fact, rocks are some of our planet’s greatest carbon sinks. This capture occurs through a process called chemical weathering, whereby atmospheric CO2 gets dissolved in raindrops, forming carbonic acid, which reacts with the rock minerals and causes them to break down and ‘weather’. During that process, carbon also changes form and gets locked into the sediment as bicarbonate: this effectively strips it from the atmosphere and keeps it circulating in terrestrial and ocean systems for long periods of time.

Chemical weathering occurs on naturally slow timescales, because rocks take centuries to break down. But, we can accelerate this process by crushing them, which exposes minerals and creates a larger surface area for weathering to occur and therefore for minerals to absorb CO2. This is the idea behind rock dust, which researchers have been exploring for several years as a way to swiftly capture more CO2.

In fact, the recent study builds on research by the same experts who published work in 2020 estimating the drawdown potential of rock dust in several nations around the world; their new paper homes in on the UK, where they discover the unrecognized potential for this approach to meet the country’s net-zero goals.

To make that discovery, they developed a model to test how much CO2 could be captured if we applied it across UK farmlands, factoring in elements such as diverse soil conditions and variable weathering rates (on account of regional climate differences) across the UK. Specifically, the researchers looked at basalt, a widely-available mining byproduct that contains rapidly-weathering minerals. Their model also incorporated the emissions costs of mining and then spreading this powdered rock over fields.

Despite this, the potential of rock dust to offset the country’s emissions was huge: by 2050, it could be removing up to 30 million tons of CO2 from the atmosphere each year, capturing almost half—45%—of the emissions the UK needs to vanquish from its atmosphere, if it hopes to reach its 2050 net zero targets.

The long-lasting drawdown potential of minerals means that with successive applications of rock dust to farmland, the amount of captured CO2 could cumulatively reach up to 800 million tons by 2070, the researchers also showed.

But these solutions are contentious, partly because the space is largely occupied by high-tech, costly innovations such as direct-air capture technologies, which some accuse of distracting from accessible solutions that are already within our grasp.

But the benefit of rock dust as a carbon removal method is that it’s a low-tech solution, that’s also pretty much ready to implement, the researchers argue. It also uses food production to achieve its benefits, rather than competing with crops for space—as some other large scale carbon-removal projects might, they note. And yet, this tantalizing solution has so far been overlooked in UK climate policy.

Increasing the status of rock dust as a climate solution will require buy-in from farmers, who could be won over with the clear co-benefits that rock dust could bring to their land: rock dust not only captures carbon but also puts nutrients and minerals back into the soil that can reduce the need for fertilizers, dramatically cutting costs.

The public, too, may need convincing, especially since reaching the required quantities of basalt to cover UK farmland will demand a few new basalt mines, and mines are flashpoints for public opinion. This extraction would need to be managed carefully to meet sustainability and community needs, the researchers caution.

But whether or not it finds a foothold in UK policy, they hope for now that their model will provide a ‘blueprint’ for other nations to start exploring the benefits of rock dust on farms. “This technically straightforward-to-implement [carbon dioxide removal] technology could prove transformative for utilizing agriculture to mitigate climate change.”