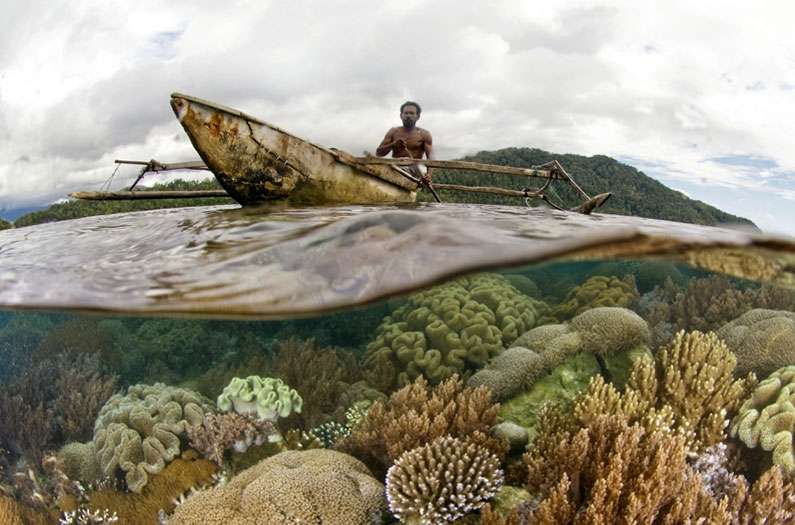 As conservationists push to save habitat from destruction, a study of Indonesian reefs finds that giving local Indigenous communities a hand in managing reserves makes for more effective protections.
By Warren Cornwall
May 4, 2022

In the remote northwest of Indonesia lies a coral wonderland, an area the size of Wyoming that boasts 600 species of coral and 1,700 species of reef fish. Known as the Bird’s Head Seascape, the area is also home to 350,000 people living on some of the 2,500 islands, many of whom rely on the reefs and fish for their livelihood.

That overlap has made it a laboratory of sorts for conservationists trying to figure out how to balance wildlife preservation with the needs of people who live in these places. New research in these Indonesian islands suggests that giving local residents more say over how protected lands and species are managed could be a key to success.

“If we want them (protected areas) to be effective both for nature and for people, I think the takeaway is we need to empower these local communities, many of which have been managing these land and seascapes for centuries,” said Robert Fidler, an ecologist at Florida International University.

As world leaders weigh proposals to protect more habitat in the face of a global extinction crisis, lands occupied by Indigenous peoples are a critical part of the equation. It’s estimated that a quarter of the Earth’s land surface – around 38 million square kilometers – is controlled by Indigenous peoples, overlapping with nearly half of the protected areas and wildlands.

That includes the Bird’s Head region. Starting in the early 2000s, the Indonesian government designated underwater protected areas there encompassing 36,000 square kilometers, enough to cover the states of Maryland and Delaware combined. That included prime fishing grounds for some of the dozens of small villages there.

Drawing lines on a map is one thing. Turning them into real results on the ground is another. The changes underway at Bird’s Head drew the attention of the Alliance for Conservation Evidence and Sustainability, a coalition of universities and major environmental groups studying ways to improve from conservation efforts such as creating wildlife reserves.

The groups set out to see how the fate of coral reefs might be linked to the people living there and differences in how these newly-protected areas were managed. For Fidler’s research, they focused on four different locales. On the fish side, divers visited dozens of reefs twice between 2010 and 2016. Some places had fishing banned altogether. Others had additional fishing restrictions. Still others were outside designated protected areas. The researchers counted fish and estimated the total mass of the fish living at each spot and compared how things had changed between the two visits.

The results were, in some ways, a muddle. Changes in fish mass varied wildly from one place to another. Overall, fish mass, paradoxically, increased a bit more outside the protected areas than inside them. Areas where fishing was banned performed slightly better than places where some fishing was allowed. “These sites just seemed to have highly variable fish biomass, which was a challenge for us,” said Fidler.

But these overall trends obscured important differences at the local scale. One region, Selat Dampier, stood out. There, all four of the sites where fishing was banned performed better than comparable spots outside the protected area, and 88% of the places that allowed some fishing with restrictions outperformed unprotected spots, according to research published today in Science Advances.

To understand why some places might fare better, Fidler and his colleagues turned to information about the people and how much say they had in the rules governing fishing in the area. Based on household surveys and interviews with key figures in local communities, the researchers found a pattern: Fish populations overall did better in places where local people had more control and faced less draconian enforcement.

In those places, people more often reported that penalties for breaking fishing rules were matched to the offenses, the rules were tailored to the particular location, and locals were able to participate in decision making. In Selat Dampier, “it seems like there’s a real established participatory process there that shows up in a lot more of the (protected) sites,” said Fidler.

He suspects two things are at play. Because these communities have fished here for generations, their insights can help make policies more effective. Also, if people feel like they had a hand in creating the rules, they are less likely to break them.

The findings here won’t necessarily translate to every other place, cautioned Fidler. For example, the fishing is small-scale. In communities reliant on industrial resource extraction such as mining, community management of protected areas might pose problems for wildlife and habitat.

But in places like Bird’s Head, “not only is it more equitable,” to give locals more say over what happens. “We’re likely to see better outcomes if we include people who know the most about these ecosystems,” said Fidler.