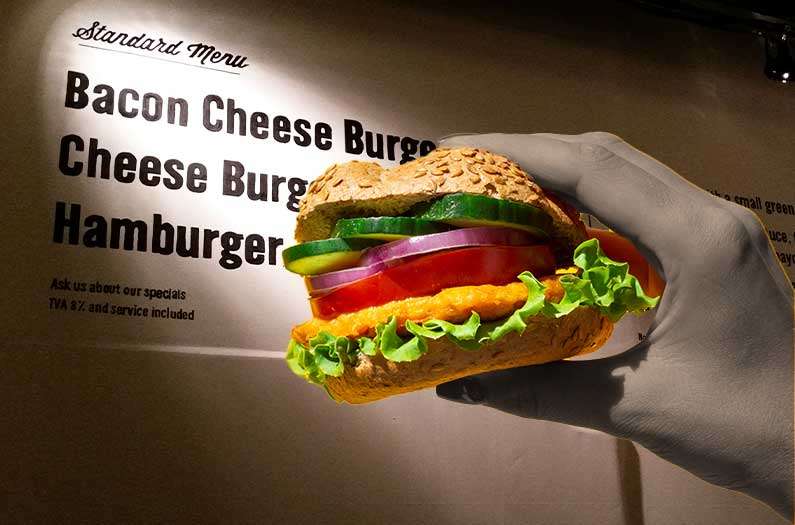 Researchers find two ways to redesign restaurant menus to reduce the climate impact of eating out.
By Sarah DeWeerdt
May 17, 2022

Diners are more likely to select low-carbon dishes from a restaurant menu when the menu has carbon labels, according to a new study. They are also more likely to choose a low-carbon option when it is presented as the default.

“We think that this is good news for restaurant operators who are willing to contribute to the struggle against the climate crisis, because they can easily contribute to this struggle by adding carbon labels or switching default options” – without having to immediately overhaul what’s on offer, says study team member Benedikt Seger, a psychologist at Julius-Maximilians-Universität Würzburg in Germany.

Food choices are an important contributor to people’s individual carbon footprints. Past studies of how to get people to make greener food choices have mostly focused on food purchased at grocery stores to cook and eat at home. The new analysis is part of a smaller but growing number of studies focused on how to get people to choose more climate-friendly meals when dining out.

Seger and his collaborators created menus for nine hypothetical restaurants representing various cuisines. They recruited 256 volunteers for an online study in which each person picked a dish from each of the nine menus. Half of the study participants saw menus that indicated the amount of greenhouse gas emissions associated with each dish and a green, yellow, or red symbol signaling low, medium, or high emissions. The other half chose from menus without carbon labels.

Six of the hypothetical restaurants served dishes in which the protein source could vary according to the diner’s choice – for example, a coconut curry with beef (red), chicken (yellow), or tofu (green), or a couscous salad with beef (red), chicken (yellow), or falafel (green). On these menus, the researchers also varied the default option: some study participants saw a menu featuring coconut curry with beef as the default protein and tofu presented as an alternative, while others saw the same menu with tofu as the default.

“Participants who received the carbon labels saved an average 200 grams of CO2 per dish compared to those who ordered from menus without these labels,” says Seger. “The default switches were associated with mean savings of 300 or even 500 grams of CO2, depending on what they were compared to.”

The findings are in line with past studies that have tested the effect of either carbon menu labeling or default switching separately. The new study is the first to look at both strategies in combination.

That’s important for both practical and theoretical reasons, Seger says. “Practically, it matters if one needs to include both the labels and default switches to achieve a considerable saving of CO2 per ordered dish. The answer is no.” Either strategy appears to be able to change diners’ behavior in a significant way.

The findings also lend insights into the psychology underpinning people’s ordering choices in restaurants. The effect of both carbon labels and default switches in combination is less than the sum of either strategy employed separately. That’s a hint that both approaches draw on the same psychological mechanisms. They likely work by drawing a diner’s attention to eco-friendly choices, as well as conveying social norms (that is, both “green” menu items and default options are seen as having social approval), the researchers say.

“We hope that these menu features become a bit more popular now and that the first restaurants use them,” Seger says. Right now, the idea of walking into a burger restaurant and seeing a menu with a veggie patty as the default, and beef as an alternative option that diners can specially request, seems pretty radical. But perhaps that won’t always be the case: “If the first restaurants start doing so, it is likely that others will follow soon,” he adds.

Image: Collage based on a photo by Drew Tarvin via Flickr.