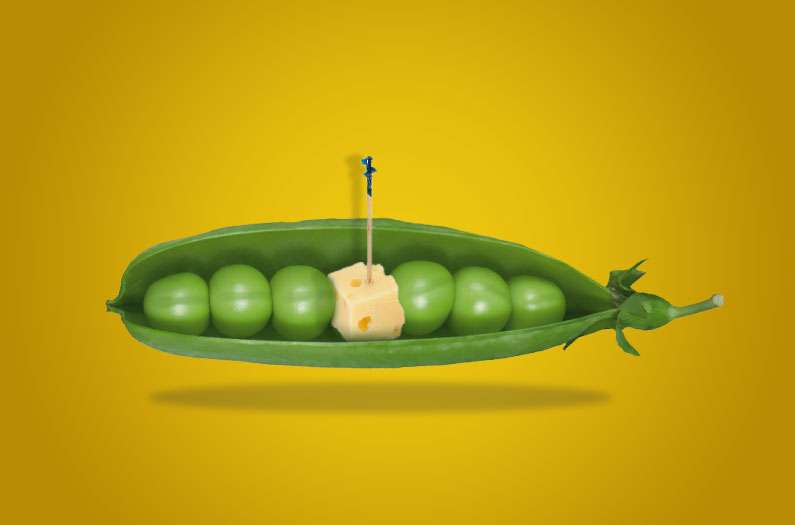 Under experimental conditions, pea proteins form a substance that resembles the firm but gooey texture of cheese—a precursor to lower-impact dairy alternatives.
By Emma Bryce
June 17, 2022

A slice of vegan cheese may look like the real deal—but as many who’ve ventured into veganism will know, where it should melt into a delicious goo, it usually dissolves into a gluey sludge instead.

Now researchers who have been tinkering around with plant-based proteins say that they’ve managed to develop a fermentable substrate made of yellow peas, that could bring us significantly closer to the firm texture of real cheese. That could prove useful in winning more people over to lower-impact dairy alternatives.

It might be a surprise that there isn’t already more convincing vegan cheese on the market, considering the variety of high-quality plant-based milk available. But plant-based milks are easier to make because we’ve cracked the code for turning plant flours into milks containing soluble proteins.

The vegan cheeses that do exist usually rely on a high quantity of fat—like coconut oil—to try and replicate the texture of cheese. However, these fall short because dairy cheese actually gets its desirable consistency from its rich matrix of proteins, which are transformed through the fermentation process of cheese-making into a gel-like substance that underpins the mouthfeel of cheddar, mozzarella, camembert, and brie.

The challenge of achieving this with plants lies in making a mixture that’s dense in proteins that can be transformed into these essential gels—but while also creating a mixture that’s initially liquid, and also stable enough, so that fermenting bacteria can be infused in and gradually populate the mixture they’re going to transform.

Complicating this is the addition of fats, which are important for the texture of cheese, but which can also upset the mixture’s stability. Plant-based substrates also need a degree of processing to ensure, for instance, that there isn’t too much starch in the mix, which will cause it to solidify before fermentation.

Despite this array of challenges, the researchers went ahead with their chemistry experiment, and set about mixing together varying concentrations of pea proteins, olive oil (for fat), and fermenting lactic acid bacteria, to determine the optimal amounts and timing for a gel-like matrix to form.

After trial and error, they happened on precisely the right combination to transform pea protein into a successfully-gelling substance. Under these fine-tuned conditions, their pea proteins formed a dense 3D matrix conducive to the springy texture of cheese. The researchers also showed they could keep the mixture stable for at least seven hours, allowing a decent amount of fermentation by the bacteria—which need between three and seven hours to do their job, lead author Poul Erik Jensen told Anthropocene. Meanwhile, the addition of about 10% olive oil was optimal to create suitable fat levels, but without disrupting the protein-to-protein bonds that formed the springy matrix.

Recommended Reading:
Cocoa butter might be the secret ingredient for 3D-printed plant-based meat

Demonstrating that pea proteins can achieve this first crucial gelling phase to generate a consistency resembling cheese is “one step” towards a vegan product that mimics the real thing, says Jensen, who is also a professor of plant based food biochemistry at the University of Copenhagen. Most importantly, the research has created a foundation on which others can build and experiment, to bring the substrate closer to dairy cheese in taste and mouthfeel as well.

That’s exactly what the current study’s authors will be investigating next. They’re already screening for new microorganisms and lactic bacteria varieties that can impart unique textures and flavors, with possibilities as diverse as dairy cheeses themselves, Jensen says.

They aim is not to settle for an ‘alternative’ cheese, but to create a product that mimics the real thing. It’s a big challenge, but one worth pushing for, considering the real dent that a tastier vegan cheese might make in the dairy-related greenhouse gas emissions.

“If we want to make a plant-based cheese, it has to taste like cheese,” Jensen says.