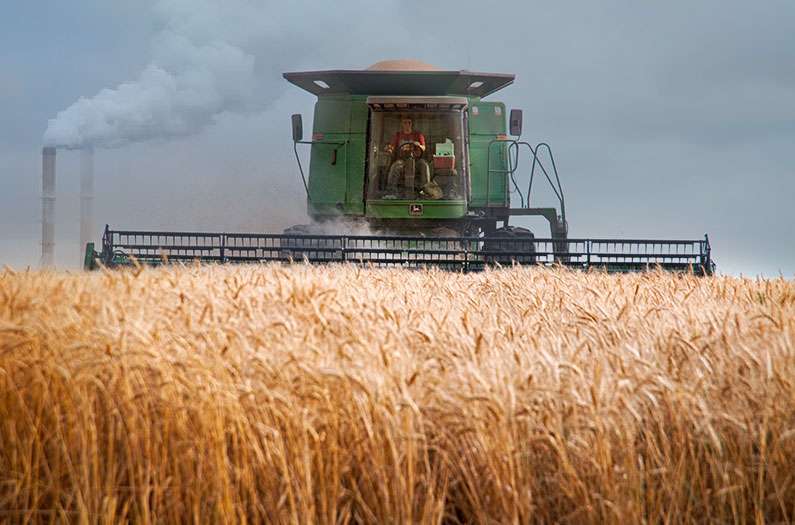 By connecting satellite data on crop greenness and nitrogen dioxide levels, researchers have uncovered an enormous untapped opportunity to boost crop yields and clear the air.
By Emma Bryce
June 10, 2022

Reining in air pollution—especially of one particular pollutant that’s generated by burning fuel—would create cleaner air conditions that support thriving crops and boost agricultural yields in some countries by 25%, a new study finds.

These compelling estimates, from a new Science Advances study, builds on several other recent research papers involving many of the same scientists, which investigated the link between nitrogen oxides and declining crop yields in the US.

Nitrogen oxides is a term covering a group of poisonous gasses, expelled by car exhausts, coal plants, and industrial activities, and known to affect the functioning of plant cells, thus impeding their growth. Primarily, these gasses affect crops indirectly by encouraging the development of ozone, another gas which disrupts photosynthesis and undercuts plant yields.

But in the new study, the researchers wanted to build up a clearer picture of exactly how this interaction happens, and more ambitiously, at global scales. They homed in on one type of harmful gas called nitrogen dioxide (NO2): not only is this gas a good indicator of overall nitrogen oxide pollution levels in the atmosphere, but usefully, it’s effects are directly traceable because its unique spectral signature can be detected by satellites. That means researchers don’t then have to rely on indirect measures of ozone to determine effects on crops.

Seeing as satellites can also measure greenness levels in plants—a trusted indicator of photosynthesis levels and yields—this provides an ideal way to trace the effect of rising pollution levels on crops, and conversely what happens if we scrub it from the air.

Focusing on the period between 2018 to 2020, the researchers gathered huge amounts of satellite data on crop greenness and nitrogen dioxide levels, over five major agricultural regions of the world, including China, the United States and India. The satellite platform they relied on produced daily records, at a high resolution of about one kilometer across the focus regions. This gave the researchers a comprehensive picture of how changing pollutant levels tracked with crop growth.

What this revealed for the first time was a very clear association between NO2 levels and crop yields: where pollution is higher, the negative impact on crops seems to be higher too. China was a notable hotspot, sacrificing around a quarter of its yields to high levels of pollution in parts of the country.

Weather and seasons influenced the interaction too, with pollution peaks and yield declines that were especially marked in the winter months. The satellite data also revealed that the unique chemistry of NO2 causes direct impacts on plant cells, but also by contributing to the formation of ozone, helping to confirm these two pathways as drivers of yield decline.

This paints a grim picture of how pollution is poisoning global crops. But on the flip side, this data also gave researchers a chance to model what would happen if we eradicated some of this airborne haze.

This revealed a real opportunity to boost crop yields: reducing levels of nitrogen oxides by half would clean up the air sufficiently to increase winter yields in China by 28%, and by 16% in summer, estimates showed. This was followed by western Europe, which could achieve increases of 10% in both summer and winter, and in India where yield gains of between 6 and 8% could result from cleaner air.

There’s genuine potential to reach these targets with changes we can start implementing now—and that in many countries, we already have. Nitrogen oxides result from the burning ‘dirty’ fuels, so relying more on renewable clean energies, transitioning to electric cars, and applying more progressive energy policies are surefire ways to halt the flow of polluting gasses into the atmosphere and create tangibly better growing conditions for crops.

Over time, this could achieve the higher yields per hectare that the study estimates, and feed more people more efficiently. This, itself, is an important solution to agriculture’s environmental problems of terrestrial spread, habitat destruction, and excessive fertilizer use, the researchers say.

“The main take-home from this study is that the agricultural benefits of these actions could be really substantial, enough to help ease the challenge of feeding a growing population.”

Image: based on photo by Darla Hueske on Unsplash