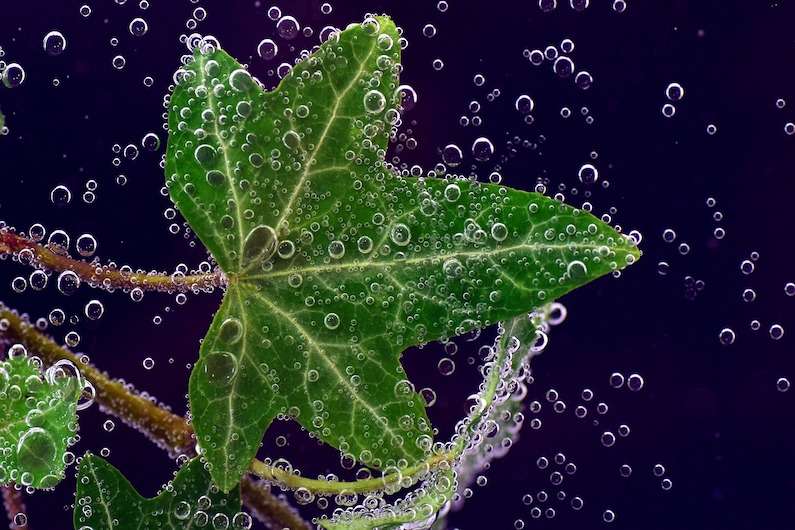 Systems made from sunlight-harvesting materials that split water into hydrogen fuel typically last a few minutes to a couple days. Now a team of chemists and materials scientists have stretched that to weeks.
By Prachi Patel
June 16, 2022

A new artificial leaf device made of plentiful materials produces hydrogen from water and sunlight for weeks, shattering previous records, researchers report in a new study. The finding could provide a sustainable, and affordable path to produce green hydrogen for fuel.

Hydrogen packs an energy punch as a fuel, holding three times more energy per weight than gasoline or diesel, and far more than lithium-ion batteries. Plus, hydrogen fuel cell vehicles, which run on battery-like devices that are fueled by hydrogen, only produce water at their tailpipes as a by-product. Hydrogen is an especially promising fuel for long-distance transport such as aviation and shipping.

But to decarbonize transportation, hydrogen will have to be greener. Right now, it is mostly made by splitting methane, which releases carbon dioxide. Green hydrogen would be produced by using renewable electricity to split water.

Another electricity-free way to make green hydrogen are devices that can harvest sunlight to split water in a method akin to photosynthesis in plants. But artificial leaf devices made from low-cost, earth-abundant materials such as perovskites don’t fare well when submerged in water, typically lasting a few days.

In the new Nature Materials paper, a team of chemists and materials scientists in the UK report devices made from a non-toxic, readily available light-absorbing material called bismuth oxyiodide. “We have been working on this material for some time, due to its wide-ranging potential applications, as well as its simplicity of fabrication, low toxicity and good stability,” said Judith Driscoll, a professor of materials science and metallurgy at the University of Cambridge in a press release.

To further increase the stability of the bismuth oxyiodide, the researchers sandwiched it between two other metal oxide layers. Then they coated the device with a water-repellant graphite paste. This increased the stability of the light-absorbing layer from a few minutes to a few weeks.

In an innovative design inspired by solar cells, the team then made devices composed of smaller light-absorbing areas, or pixels, on glass surfaces. Tests showed that these multi-pixel devices performed better than conventional devices with a single larger pixel of the same area. That’s because of some pixel areas are faulty, they do not affect the performance of others.

The materials and the pixel design concept could pave the way for large-scale artificial leaf systems for sustainable hydrogen production, the team says.