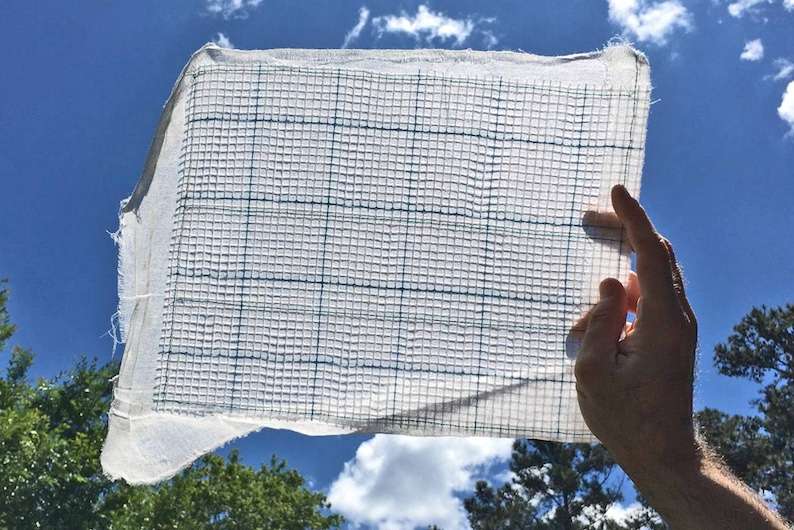 A team of chemists envision scaling up their new filter to smokestack size, where it can turn carbon dioxide into bicarbonate, aka baking soda
By Prachi Patel
June 9, 2022

Long met with skepticism, the idea of capturing carbon dioxide from air and from industrial smokestacks is now accepted as necessary to avoid the worst impacts of climate change. Capturing carbon at low cost on a large scale will require innovative solutions.

Researchers now report one such method, involving simple, commonly found materials. It is a textile filter made of a cotton fabric that is coated with a special carbon dioxide-trapping chemical.

Given its simplicity, the filter removes carbon dioxide from air and gas mixtures at promising rates, the researchers from North Carolina State University report in the journal ACS Sustainable Chemistry & Engineering.

Over 130 commercial carbon capture projects are in the pipeline around the world to capture carbon dioxide from power plant or factory flue gas. Most rely on liquid solvents or porous solid materials to trap the greenhouse gas. The material then has to be heated at high temperatures to separate the carbon dioxide for burial or use, and to recycle the sorbing material. That regeneration of the sorbent takes a lot of energy and accounts for more than half of a carbon capture system’s operating cost.

Chemist and textile engineer Sonja Salmon and colleagues chose the natural enzyme carbonic anhydrase. In the human body, this enzyme helps transport carbon dioxide so it can be exhaled. The enzyme speeds up a reaction in which carbon dioxide and water combine to form bicarbonate, which is the main ingredient in baking soda.

The researchers started by dipping a two-ply cotton fabric into a solution of chitosan, a sugar molecule derived from the shells of crustaceans like lobsters and shrimp. The chitosan acts like a glue, helping attach a coating of the carbonic anhydrase enzyme to the textile.

To test the material, the team rolled up the fabric and put it in a tube. Then they pushed then pushed a mixture of carbon dioxide and nitrogen gases—similar to what is found in flue gases—through the tube along with a water-based solution. The carbon dioxide reacted with the water and the enzyme, creating liquid bicarbonate that dripped down the filter, where it could be captured and siphoned out.

When the researchers pushed air through the filter at a rate of four liters a minute, they were able to capture over 52 percent of carbon dioxide with a single-layer filter, and almost 82 percent with a double-layer filter. The material worked after being washed and dried five times.

“The enzyme can be maintained at a lower temperature for a very long time and it’s going to be durable,” said Jialong Shen, a postdoctoral research scholar and lead author of the paper in a press release. “The fabric provides physical support and structure for it, while providing a large surface area for it to react with the carbon dioxide.”

It’s a good first demonstration, but the team needs to test the material at much larger scale to test its viability in practical conditions. In the real world, a carbon capture material would have to content with 10 million liters of flue gas per minute.