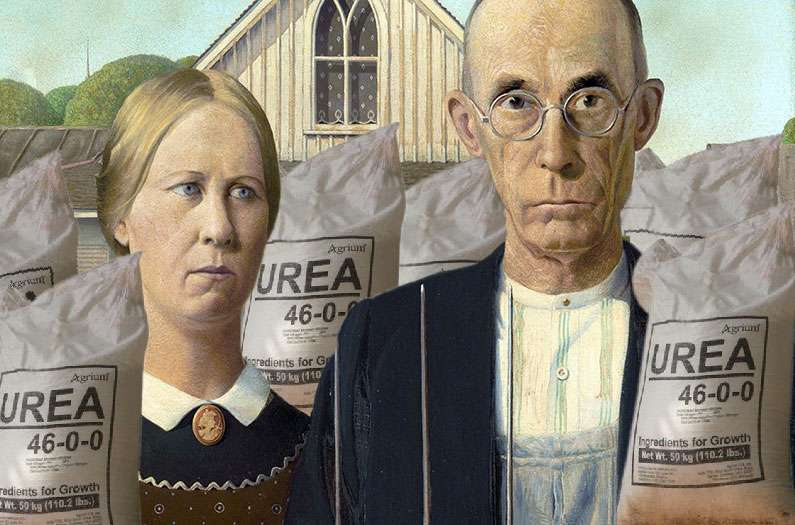 A research team tested various policy options—from taxes to fees to volunteerism—to tackle the problem at its source. Making the "polluter pay” came out as the best option.
By Emma Bryce
June 3, 2022

Researchers have discovered that charging farmers a fee for nitrogen leaching could reduce fertilizer pollution by 20% in the US state of Illinois, without affecting farmers’ bottom lines. Reining nitrogen leaching in by this amount and diverting it from freshwater bodies and the sea would also result in a host of environmental and health benefits, equating to national savings of $524 million annually.

The study comes as debate grows about how to tackle nitrogen pollution in regions like the Midwestern US, where intensively-farmed states such as Illinois leach huge amounts—deriving from excess fertilizer application on crops—into the Mississippi Delta and ultimately the sea, where it causes large dead zones.

Traditionally, states have tried to tackle this problem with clean-up efforts, so-called end-of-pipe solutions that attempt to solve the issue once the damage is effectively done. But the authors on the new study argue that this focus has created a policy vacuum on the inputs side, where states are missing opportunities to regulate the amount of nitrogen farmers put into the soil in the first place.

So, curious to test the impact that nitrogen-focused policies could have, the researchers built a model based on fertilizer application data from over 4000 soybean and maize fields in Illinois. Using these, they simulated how inputs would change under four different policy scenarios, including placing a tax on nitrogen fertilizer, charging a fee depending on the amount of excess nitrogen leached from fields, and encouraging voluntary measures to reduce pollution on farms. Crucially, within this model farmers received compensation to offset the cost of these nitrogen-reducing policies, and any production losses associated with lower fertilizer use.

Encouragingly, the model revealed that nitrogen pollution would decline under all simulated policy scenarios. However, the more ambitious the pollution reduction target was, the more exponentially expensive the policies became to implement because of the need to offset farmers’ costs. So the researchers tried to identify an optimal target where meaningful nitrogen declines could be achieved at the lowest possible price.

This revealed a 20% reduction in nitrogen leaching as the optimal target, a decline that could be achieved with less than 3% reduction in yields, and little or no effect on farmers’ profits. Implementing these policies would cost the state about $30-37 per hectare, the researchers calculated—which conveniently also falls within the price range of existing government payments for conservation programs, meaning this solution could fit neatly into existing policy infrastructure.

Read:  A map of excess nitrogen use across the US reveals where and how to act

What’s more, that 20% dent in nitrogen pollution would deliver impressive health and environmental payoffs in the longer term. Nitrogen pollution is associated with downstream environmental consequences like eutrophication that results in costly losses and cleanups. Meanwhile, its residual presence in drinking water is associated with increased risk of diseases like colon cancer in humans, linking pollution to health care costs.

Yet, reducing nitrogen pollution by just one-fifth would cut the associated environmental and health costs by $524 million a year, the researchers calculated. This represents a 260% return on investment of the initial cost of implementing the pollution-reducing policies. This makes a powerful case for tackling nitrogen pollution at source, before it occurs, rather than trying to clean up the mess once these costly and wide-ranging damages have been done.

While all policy scenarios led to nitrogen reductions, the researchers flag one approach that they believe will be especially adept at tackling the environmental challenges: charging farmers a fee for excess leaching in their fields. The benefit of this approach is that it would make it more expensive for farmers on high-leaching fields to apply excess fertilizer, which succeeds in targeting hotspots of nitrogen pollution and thereby “obtaining reductions in places where it matters the most,” the researchers explain.

They are careful to note that their findings are based on a model, which are always imperfect because of the assumptions they make. For instance, their model is unable to predict all the various ways that farmers may behave in response to policies imposed on their livelihoods. What’s more, several practical challenges to implementing these solutions lie ahead—for example, developing technology to accurately detect excess nitrogen leaching in fields, which doesn’t yet exist.

Nevertheless, the study’s intention isn’t to suggest a particular policy or solution. It simply aims to start a much-needed conversation about upstream measures to rein in fertilizer use, that will eventually fill the gaping policy vacuum on nitrogen pollution, the researchers write. “The “polluter pays principle” is proposed as a paradigm change needed to start achieving the desired environmental results in agriculture.”

Mandrini et. al. “Exploring Trade-Offs Between Profit, Yield, and the Environmental Footprint of Potential Nitrogen Fertilizer Regulations in the US Midwest.”  Frontiers in Plant Science. 2022.