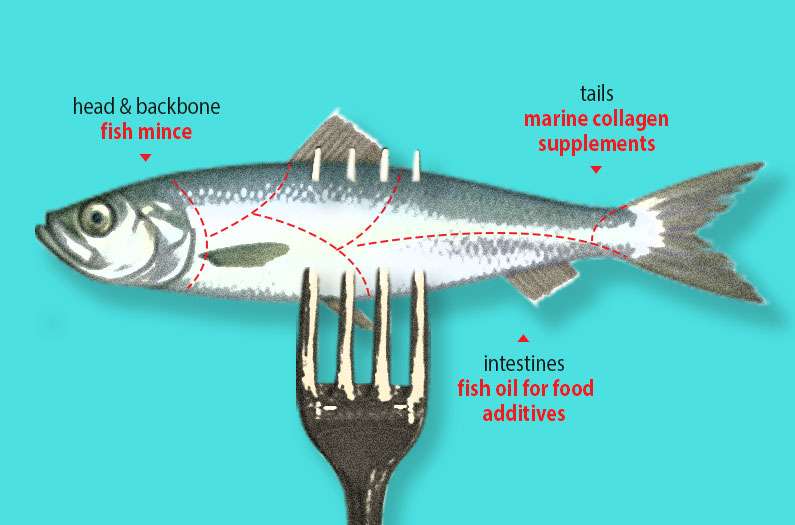 The new system diverts fish 'byproducts' from their fate as animal feed, turning them into human food and reducing pressure on wild stocks at sea.
By Emma Bryce
July 1, 2022

Researchers have invented a method that can strip and use the entire carcass of a herring, turning everything from its head to its tail into food that’s suitable for human consumption, instead of just the prized filet alone.

Their innovation could help tackle enormous quantities of fish waste along the supply chain, and simultaneously reduce pressure on severely overfished wild stocks at sea.

The new sorting method makes it possible to extract and separate an additional five parts of the fish just as carefully as the filet: the head, belly flap, backbone, tailfins, and internal organs. The trial technology, developed by researchers from the Chalmers University of Technology in Sweden, has already been successfully tested at a fish processing plant in the country, which is now making new food products for human consumption from these leftover parts, including fish mince for burgers, made from the backbone and head.

Usually, fish processing plants discard these valuable and nutritious ingredients and only preserve the filet—often viewed as the only edible and therefore marketable and valuable part of the fish for human diets. The rest, viewed as a ‘byproduct’, is tossed aside into big containers where it forms a slurry that often just goes on to make animal feed. Ironically, much of this feed is then used to raise farmed fish.

This results in a diversion of ingredients and nutrients that could be put to better use directly feeding people instead. But an added problem is that fish parts such as the head and viscera contain more blood, which makes them more vulnerable to decomposition. So, within the slurry these quickly-decomposing bits can contaminate other valuable byproducts, wasting a whole lot of perfectly good vitamins, fats and minerals that fish by-products contain.

In fact, this loss at the processing stage contributes to the huge global problem of fish loss, which sees one-third of wild-caught fish wasted and discarded before it reaches anyone’s plate.

The new sorting technology sets out to help solve this problem by building on the results of the researchers’ previous work: they have also invented a special solution that’s designed to better-preserve fish. After the fish are processed and sorted into their six edible fractions, each is dipped in a liquid containing rosemary extract and citric acid, two preservants that slow decomposition, giving fish parts a longer shelf life and allowing more time to process and store the fish. From here, they can be processed to make different foods and additives, including fish oils from intestines, and marine collagen supplements from fish tails.

The most recent research published in the journal Food Science, describes a preliminary step towards the sorting technology the researchers developed, and this study also established through testing that some fish byproducts are richer in several nutrients, including proteins, than the fish filets. This underscores the lost potential when we toss these ‘byproducts’ aside.

Real sustainability benefits could result from this innovation, the researchers believe. Wild fish populations are currently threatened by climate change, pollution, and industrial fishing: this makes fish ever more valuable, and their wastage ever more serious. If we can use fish more efficiently, and turn more of the animal into direct nourishment for people, we might need to extract less fish from the sea, and perhaps relieve some pressure on these wild stocks.

Now all that remains is for the technology to catch on. There are positive signs from Sweden, where the processing plant that trialed the innovation aims to be producing 300 million tonnes of fish mince from former byproducts by the end of the year.