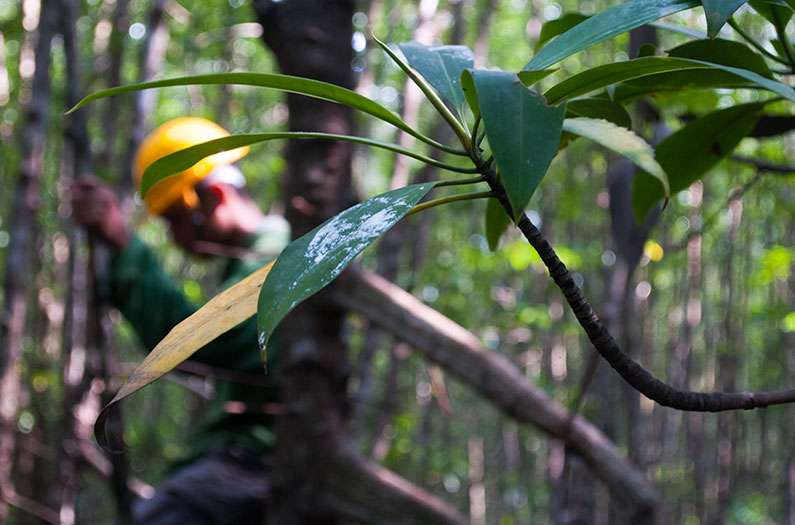 Thousands of kilometers of shoreline would qualify as cost-effective candidates for mangrove forest and coral reef restoration, thanks to their ability to reduce flooding, new research shows.
By Warren Cornwall
July 6, 2022

While proponents of environmental restoration often talk about ecological benefits, people controlling the purse strings think in dollars and cents.

So what happens when conservationists use the cold calculus of money to decide whether a costly project makes sense? For mangrove forests and coral reefs in the Caribbean, new research suggests that in many cases the work pays off.

The results point to ways that underfunded environmental projects could get a boost by tapping into the much bigger pool of money available for recovery from natural disasters such as hurricanes.

“Recovery funding will grow as climate change increases the impacts from storms, and environmental funding will likely shrink as national budgets are strained by natural disasters,” said Michael Beck, a researcher at the University of California, Santa Cruz, who led the work. “Funding for artificial infrastructure such as seawalls can be redirected to natural defenses, which provide multiple benefits beyond coastal protection.”

The economic benefits from the natural world have been a growing source of study, given the pressures to win scarce dollars and show that the benefits outweigh the costs. These “ecosystem services” can range from water-cleaning by wetlands to cooling from urban trees.

Mangroves trees grow at the intersection between ocean and land. Their stilt-like roots, which suspend their trunks in the air, break up waves and capture sediment. That helps to build up land and blunt the force of storm-driven floodwaters. A 100-meter-wide forest can soak up two-thirds of the energy in waves.

Reefs act as underwater seawalls, intercepting waves before they reach the shore. Anyone who has sat on a beach shielded by a coral reef can testify to their water-calming effects.

The researchers took estimates of how much these two natural systems reduce flooding and matched them with models of water dynamics to map how much flooding is likely to happen along shorelines throughout the Caribbean during storms of varying intensities. They also incorporated likely costs of flood damage in this hurricane-prone region.

The results showed that mangrove revival would be cost-effective for more than 3,000 kilometers of coastline, much of it in the U.S., Bahamas and Cuba. Rebuilt coral reefs pay off along more than 1,000 kilometers, chiefly in Cuba and Jamaica, according to Beck’s paper in Ecosystem Services.

In many places these investments hold up even when the gains in the future are discounted for people living today, known among economists as the social discount rate. That rate tries to measure the difference in the value of a dollar to someone today, versus what that dollar would be worth in, say, 30 years—accounting for both the change in buying power of a dollar and the impatience people feel about having to wait for some benefit.

Fights over whether measures such as climate regulations make economic sense often hinge on what discount rate is used. Some advocate for ones as high as 7%, while others have said that for an existential threat such as climate change, it should be 0.

The scientists in this case used a 4% discount over 30 years to gauge the present value of a project. But even with a discount of 10%, the benefits still outweighed costs for two-thirds of these sections of shoreline.

The estimates of benefits from the projects could be conservative, since it doesn’t account for other ecosystem services such as carbon sequestered by mangroves or improved fish habitat in reefs; or the possibility that it could prevent still more damage as climate change raises sea levels and potentially fuels more intense storms.

While calculations such as discount rates “may sound esoteric,” said Beck. “It can be critical to getting funding for restoration projects from sources such as FEMA”—a reference to the U.S. Federal Emergency Management Agency, which plays a key role in deciding how disaster recovery dollars are spent.

That funding is not small change. Beck’s team counted more than $259 billion in annual disaster funding in the region that could help pay for these natural protections.

Some U.S. agencies have already taken small steps to steer money toward such work. In 2021, FEMA announced $1.6 billion in funding to improve resilience to disasters, and gave priority to “nature based” solutions. Meanwhile, the Defense Advanced Research Projects Agency or DARPA—known for its cutting edge and sometimes oddball research—is currently studying the potential for building reefs to protect military bases from storm damage. The name of its program: Reefense.