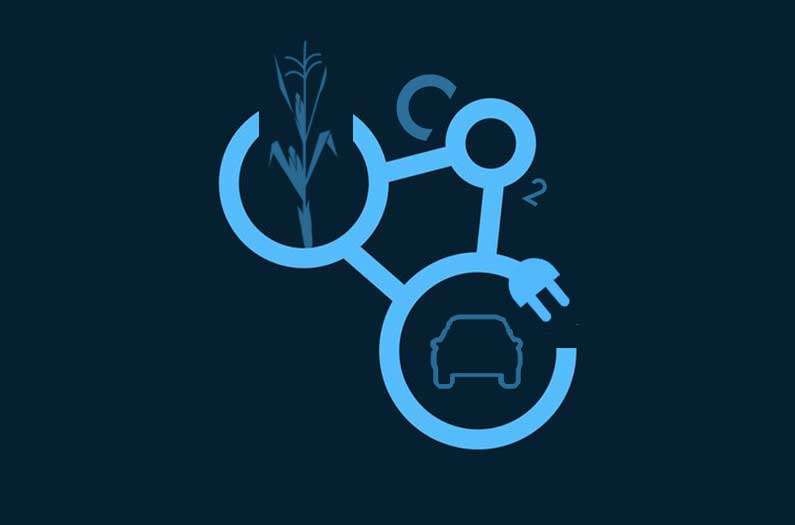 Under a full electrification scenario in the US, 4.4 million hectares of land could be saved (mostly in Brazil, China and India), and the CO2 emissions of all gas cars in the US could be halved.
By Emma Bryce
July 22, 2022

Accelerating the uptake of electric vehicles in the United States would reduce biofuel demand, rein in 10% of cropland expansion globally, and leave this land as intact habitat with protected carbon stores.

This surprising finding comes from an Ecological Economics paper, which investigates the previously unappreciated potential of EV cars to ease the pressure on wild lands. But what exactly is the connection between cleaner cars, and preserving forests?

In the US, maize is farmed for food, but also to make ethanol biofuel, which makes up roughly 10% percent of the fuel mix in most American cars, the authors explain in their new study. The US also exports a large share of its maize-derived ethanol for biofuel to other countries — an amount that the researchers say could increase if US biofuel demand declines in line with the rise of EV, leaving farmers seeking bigger external markets for their product.

That, in turn, could have tangible benefits for the security of global wildlands, if the increased availability of US-sourced biofuels slows the conversion of habitat for this product in other countries.

That’s a real concern as the demand for biofuels grows globally, threatening wild habitat in some ecosystems and also putting fuel production in competition with food security. But, slowing that conversion through a larger supply of US biofuel could bring benefits especially in tropical countries like Brazil, which have high carbon stores, the researchers explain.

The researchers cottoned on to these linkages through some previous work they had done on EVs. But in the recent study, they wanted to provide some hard numbers to estimate the actual land-saving potential of the electric transition.

To do so they built a model that projects electric light duty vehicle (passenger cars and small trucks) sales in the US, and associated changing cropland demand, between 2015 and up to 2050. The model plays with various scenarios, looking at how much carbon stocks would be affected by changing demands on the land, both in the United States and globally. In their model, these scenarios progressively increase the EV share of car sales in the US up to 100% by 2050. The researchers examined how this gradually increasing transition would affect national ethanol demand, and consequently, the share of ethanol traded with other countries.

That information was then tied to cropland data to determine how much carbon stocks would be affected by land use changes, both in the United States, and in ethanol-importing countries.

This analysis revealed that under the most ambitious scenario where all new light duty vehicles sold in the US are fully electrified, US maize exports increase due to significantly declining demand for ethanol fuel at home. But as other countries buy up the surplus, this would free up their land from biofuel production, a trade that the researchers estimate would stop 9.4% of the cropland expansion that’s projected for the period between 2015 and 2050. That’s up to about 4.4 million hectares of land saved, compared to the baseline.

Recommended Reading:
Here’s How Much the UK’s Carbon Emissions Would Drop if All Cars Were Electric

The biggest land savings would occur in Brazil, China and India, because of the pathway of US maize exports: especially in biodiverse Brazil, this potentially safeguards crucial forests and carbon stores from conversion into farms.

These savings translate into clear and meaningful emissions reductions, too. Under full electrification, the emissions avoided by keeping land intact would amount to 550.7 million metric tonnes of CO2 equivalent — in addition to the emissions saved by vehicles going electric. To put that into context, this would be the same as cutting half the emissions produced by all gasoline-consuming light duty vehicles in the US in 2019.

“Many news reports on electric vehicles focused on the environmental benefits if the electricity is generated via no- or low-carbon electric utilities,” says Jerome Dumortier, associate professor of agricultural economics and policy, and one of the authors on the new study. “We show the additional greenhouse gas benefits of electric vehicles linked to land-use change.”

The researchers flag a few points to consider around their findings — such as the fact that future demand for ethanol biofuel may increase if it takes off in new markets like aviation. What’s more, the effects of climate change on maize yields are as yet unknown. Both of these factors might lead to more maize farming, not less. The current estimates are therefore a prediction against an uncertain future. But on the other hand, the study only considers the emissions averted by land saved, but not the substantial emissions that could be avoided by excluding all the polluting inputs, such as fertilizer, that would have gone into that expanded farmland.

Either way, right now the conditions are ripe for EVs. Global sales of electric vehicles have risen 75% in 2022 from the same period in 2021. That’s being supported by policies in places like California, and the United Kingdom, which have both set a target to phase out gasoline-driven vehicles and phase in EVs in the 2030s.

This study points to a previously overlooked reason why this accelerating transition may be a good idea. “We hope that the research is used in the discussion on environmental benefits of electric vehicles which now also includes avoided emissions from land-use change,” says Dumortier.