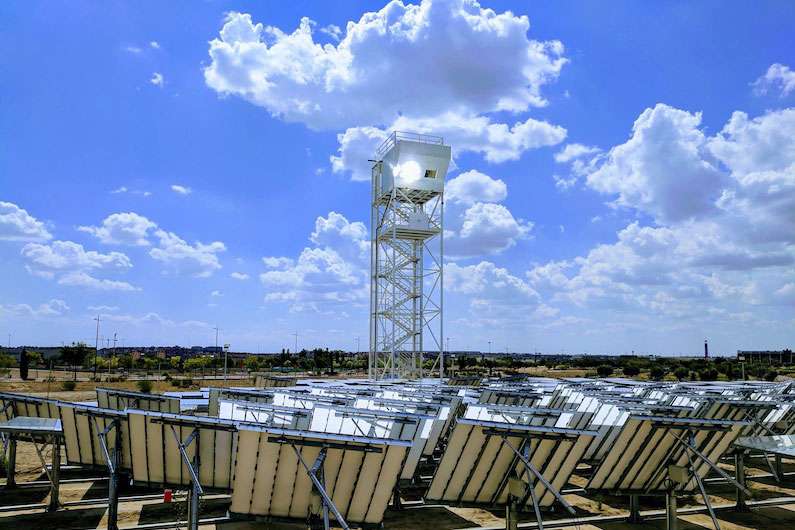 Technology to make carbon-neutral kerosene has moved out of the lab and into a real-world demonstration, hinting at the future of solar jet fuels
By Prachi Patel
July 28, 2022

Using sunlight, along with carbon dioxide and water vapor captured from air, a new solar tower can produce kerosene suitable for fueling airplanes. The system, details of which have been published in the journal Joule, is the first to be successfully demonstrated in the field at a large scale.

Aviation is responsible for around five percent of global greenhouse gas emissions. While other modes of transportation are on their way to electrification, electric airplanes are still many years away. In the near term, the industry plans to reduce carbon emissions using sustainable aviation fuels that are made today from waste fats and oils. Several research teams are developing ways to make them from paper industry waste and food scraps.

But some want to make carbon-neutral aviation fuel from captured carbon dioxide emissions. This involves turning carbon dioxide into carbon monoxide using heat, and then mixing it with hydrogen to make liquid fuels. The green hydrogen is typically produced by splitting water using electricity.

Recommended Reading:
Taking Off in Two Directions at Once

Aldo Steinfeld and his colleagues at ETH Zurich have devised a more sustainable way to do this using only solar energy. They use concentrate sunlight to heat up a reactor that is fed water and carbon dioxide captured directly from air using special sorbent materials. At the high temperatures, a cerium oxide catalyst in the reactor reduces the carbon dioxide and water into a mix of carbon monoxide and hydrogen, which is turned into fuel.

The researchers have been developing the technology for over a decade. In 2015, they made solar kerosene in the laboratory, and then in 2021, they tested their solar reactor on a rooftop.

In a leap forward, they have now tested a full-scale setup outdoors at the IMDEA Energy Institute near Madrid, Spain. The setup consists of an array of 169 sun-tracking panels reflecting sunlight onto a reactor mounted on a 50-feet-high tower. The reactor is about 10 times bigger than the 2021 test, and produces a liquid fuel mix that is 16 percent kerosene and 40 percent diesel.

Over nine days of testing, the system produced around 1 liter of kerosene a day. Making meaningful dent in airline emissions would require the production of hundreds of thousands of liters, given that a Boeing 747 burns around four liters of fuel every second.

Still, this is an exciting demonstration of how solar jet fuels could be made at industrial scale in the future. For now, the researchers plan to improve the efficiency of the process. Right now, only 4 percent of solar energy is converted in syngas. By improving the ceria material and its porous structure, and by recovering some of the heat wasted in the process now, the team believes they should be able to reach efficiencies over 15 percent.