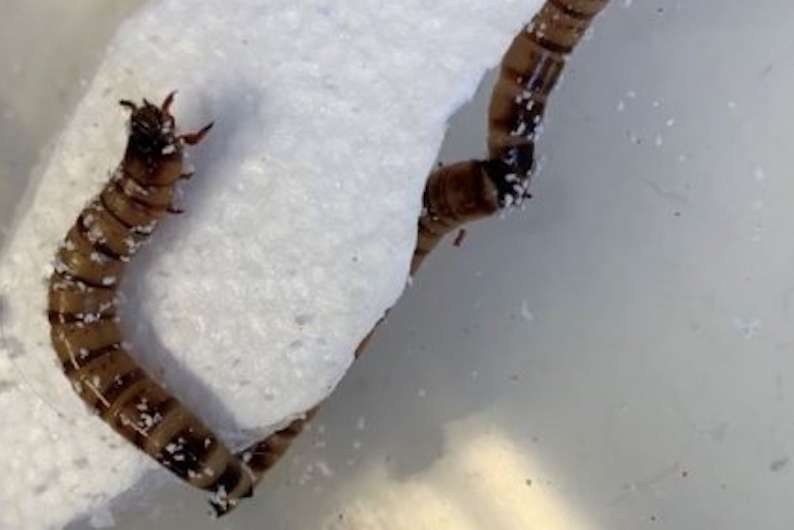 By identifying the enzymes in the worms’ guts that break down Styrofoam, researchers hope to make large-scale recycling of the notorious material easier
By Prachi Patel
July 7, 2022

Don’t toss out that Styrofoam takeout container quite yet: what’s trash for you could be food for plastic-gobbling “superworms”. Researchers at the University of Queensland in Australia have found that a kind of beetle larvae can eat and completely break down the notoriously hard-to-recycle material.

Larvae of the Zophobas morio beetle—called superworms because of their large size—have enzymes in their gut that break down polystyrene that the insects ingest. “Superworms are like mini recycling plants, shredding the polystyrene with their mouths and then feeding it to the bacteria in their gut,” said Chris Rinke, senior lecturer in the School of Chemistry and Molecular Biosciences at the University of Queensland in a press release.

Polystyrene foam, commonly called Styrofoam, is a plastic commonly used to make packing peanuts, food containers, and insulation. But it is extremely difficult to recycle, and most places don’t accept it at curbside recycling pickup. Many countries around the world, and some states in the US, have enacted full or partial bans of polystyrene foam. Yet, it remains one of the most widely used plastics: several million tons of it is produced per year.

Scientists have for years been looking for microbes or insects that could help break down the plastic. In 2015, Stanford University engineers reported that mealworms could subsist on a diet of polystyrene. Bacteria in the mealworms’ gut break down the plastic. A few other research groups have also reported that other insects, such as wax worm caterpillars and Indian meal moth larvae, can also degrade polystyrene.

But the Queensland team has conducted the most comprehensive study yet. The team have done that by identifying exactly which bacterial enzymes in the superworms’ gut break down polystyrene. The data would be key for translating this natural process into one run at large industrial scale.

For the new study published in the journal Microbial Genomics, they divided superworms into three groups, each of which got a different diet: bran, polystyrene, or nothing. The bran-fed larvae doubled their weight after a few weeks, those on the polystyrene diet gained some weight, while the starved larvae did not. This showed that the bugs could extract some energy from digesting polystyrene.

To identify enzymes, the researchers sequenced the genomes of all the organisms in the worms’ gut via a technique called metagenomics. Next, the team even identified specific enzymes that they believed acted in a sequence to break down the polystyrene in the larvae’s guts.

Ultimately, the team hopes to engineer these enzymes so that they work more efficiently than they do in the worms. Styrofoam could then be shredded in a recycling plant and decomposed using these enzymes—no superworms harmed in the process.