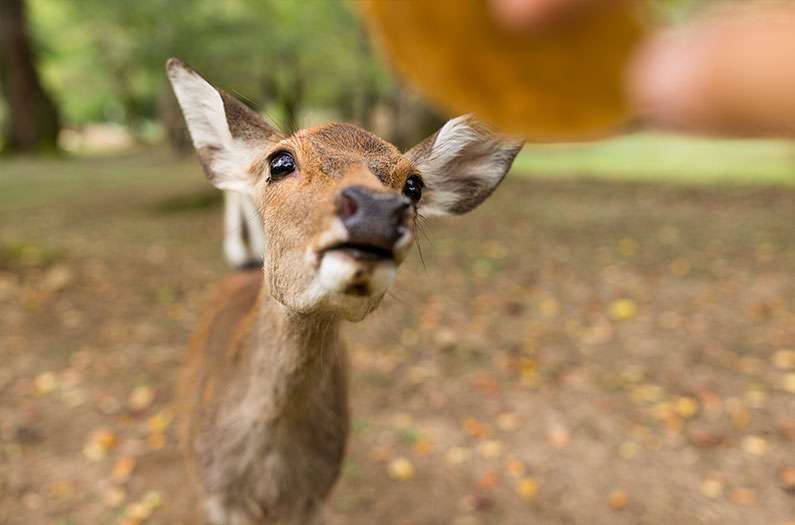 If people need another reason why it’s usually a bad idea to feed wildlife, here’s one: It might cause a species to evolve toward being more aggressive towards humans.

There’s already abundant evidence of downsides to giving handouts to wild animals. Bears that get hooked on human food are shot when they become a nuisance. Treats can be unhealthy (I once wrote about a wild moose in Vermont that was fed, among other things, jelly donuts.). Feeding sites can become a breeding ground for disease as animals pack together. Then there’s the occasional time when animals attack while they are being fed.

Despite all this, and the pleas of wildlife managers, people persist. Perhaps it’s a delusion that they are actually helping an animal, a Disney-fueled fantasy about communing with nature or a stunt in pursuit of a viral Instagram post. Whatever it is, in some places the problem has only grown worse.

Take the 600-some fallow deer that live in Phoenix Park on the outskirts of Dublin, Ireland. In the past, the deer were skittish, keeping their distance from humans. But within the last decade that has changed, as more of the estimated 10 million visitors that come to the park each year decided to try to feed the deer.

The phenomenon offered scientists at University College Dublin (UCD) a ready-made experiment to get a more complete picture of how wild animals were affected when humans started feeding them. The deer were contained in a relatively small, 7-square kilometer space. The animals were intensively monitored. More than 80% could be individually tracked by unique ear tags. And there was an enormous flow of people, some of them trying to feed the deer everything from carrots to cookies.

Recommended Reading:
Human-Driven Evolution Is a Hallmark of the Anthropocene

Among the key questions posed by the scientists was this: Did individual personalities among the deer influence their willingness to take food from people? And if so, was there a potential evolutionary advantage gained by deer more willing to take part in that selfie?

There is already plenty of evidence that human activities such as hunting can exert evolutionary pressure on species. For instance, scientists recently reported a shift towards elephants without tusks in Mozambique, a condition they tied to a history of elephant poaching for ivory.

But when it came to taking food from people, was the behavior simply learned by any member of a species presented with the opportunity? Or were some deer better beggars?

To answer that, the scientists spent several months in the summers of 2018 and 2019 at Phoenix Park watching people feed the deer. They took note of which deer took food from people, even eating it directly from someone’s hand.

It turned out that not all deer acted alike. A quarter of the deer were what scientists dubbed “consistent beggars.” Those would approach people for food roughly 30% of the time they were watched by researchers. They received food on average more than once every two hours for male deer and roughly every 7 hours for females. By comparison, 68% of the deer were “occasional” beggars and 8% rarely approached people for food.

To see if these behavioral differences gave any of the deer an advantage, the scientists compared the weight of 134 newborn fawns from does with different feeding habits. The same research group has found that heavier fawns at the park were more likely to survive. It turns out the mothers who took food from people more frequently gave birth to fawns that weighed between 300 and 500 grams more than the fawns born to deer with less appetite for human food, they researchers reported August 4 in the Journal of Animal Ecology.

These weight differences could translate into a growing number of deer with a behavioral disposition to seek food from people, warned Laura Griffin, a PhD student at UCD who was the lead author of the paper.

“In 10 years, if actions are not taken, you could end up with deer that consistently harass people, as the boldest individuals have been selected for, which clearly holds enormous risks for the people and animals involved,” she said.

While the study focused on a small population of a single species – and didn’t track the animals long enough to see if the feeding exerted enough evolutionary pressure to shift the herd’s behavioral makeup – Griffin said problems at the park could apply to other places. It “stands to reason that if this is occurring in this population, then it is very likely also the case across other populations and species as well,” she said.