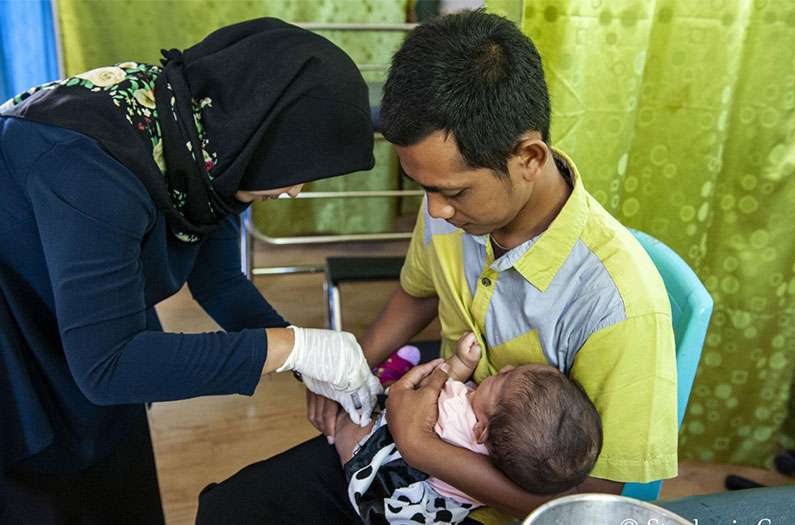 Scientists searched for projects that simultaneously benefit nature and human health. They wound up with a Yelp-like rating system for 46 strategies.
By Warren Cornwall
August 3, 2022

At first glance, building rural health clinics might seem to have little to do with saving the world’s rainforests. But it does in the jungles of Borneo.

In the mid-2000s, a team of conservationists and physicians opened a health clinic near Gunung Palung National Park, home to 10% of Borneo’s wild orangutans. The dual aims were to address illness in poor villages and remove an incentive for illegal logging by people trying to pay for their family’s medical care.

Evidence suggests it’s working. The number of families saying they engaged in illegal logging fell by 89% between 2007 and 2017, while loss of old growth forest there slowed. At the same time, infant mortality fell by 70% within five years, from 3.2 children in 100 homes to 1.1.

In a world where millions lack basic health care and wildlife habitat dwindles, any program that can successfully pull off a double-play by addressing both issues deserves the over-used honor of a “win-win” solution.

That’s how the Borneo work wound up earning relatively high marks in a new effort to identify strategies that promise to simultaneously ease human suffering and protect the natural world. A group of U.S. scientists just unveiled a website that offers a vast array of such actions—everything from vaccinating vampire bats against rabies to removing invasive honeysuckle plants.

Recommended Reading:
Renewable power pays for itself with better health

The hope is that it will serve as a kind of toolbox for people tackling these problems, as well as an expert critique of how much evidence supports whether each one really works. “Researchers and decision makers can design their own solutions or evaluate whether an existing solution will work in their situation,” says Skylar Hopkins, an ecologist at North Carolina State University who worked on the project.

Think of it like Yelp restaurant reviews by people who know what they are talking about.

Links between people’s health and the state of their surrounding ecosystems gained new attention with the COVID-19 pandemic. The virus is thought to have jumped from wildlife to humans, with bats considered a likely source. But the links between human disease and the natural world are far great than that, encompassing everything from tick-borne Lyme’s Disease to excessive heat exposure from loss of urban trees. If upheaval in natural systems can contribute to people getting sick, repairing those systems can help heal.

The new website grew from scientists studying the snail-borne parasitic disease schistosomiasis, which infects more than 250 million people in Africa, Asia and the Americas. In Africa, researchers found that snail numbers soared when rivers were dammed, blocking migration of shrimp that eat the snails. They reasoned that reintroducing the shrimp might both create a more natural ecosystem and keep people from getting sick.

The scientists then went in search of other potential solutions to problems at the intersection of human and ecosystem health. Scouring the scientific literature, they found 46 strategies that promised to address both sides of the issue, they report today in The Lancet Planetary Health.

The projects run the gamut, touching six continents and ranging from controlling invasive pythons in Florida to bans on selling meat from animals caught in the wild. Twenty-seven of the potential solutions focus on managing particular animals. In some cases, they are disease-bearing species, such as cats that carry the parasite that causes toxoplasmosis. Others rely on second-hand effects, such as the possibility that boosting leopard populations in a national park in India could translate into lower risk of rabies infection for people, because the cats eat feral dogs that carry the disease.

Six of the solutions started from the public-health side of the equation, with conservation as a secondary benefit. That includes the health clinic in Borneo, as well as efforts to limit movement of bird flu from wild birds to domestic poultry.

For many of these ideas, however, when the scientists dug into the details they didn’t find strong evidence that both people and the environment benefited. In some cases, the data was thin or contradictory. Take the case of bans on the wild meat trade, which some countries embraced as the pandemic took hold. The scientists ranked the evidence of health or environmental benefits as low. In fact, they noted that bans in Guinea and Sierra Leone in response to Ebola outbreaks had little lasting effect on the trade, and shifted traffic to the black market.

The shrimp-reintroduction idea that lead to this effort also had limitations, the scientists found. An experiment adding prawns to an enclosed section of the Senegal River cut the number of snails and reinfection rates. But one modeling effort suggested that lower snail numbers could actually increase infection risk in some cases.

Recommended Reading:
What will it take to shrink the carbon footprint of health care?

The only solution with rock-sold evidence of health and conservation benefits was vaccinating dogs against rabies, to cut the chances that wildlife and people will get infected, the researchers found.

The Borneo project ranked relatively high. The researchers gave the evidence quality a “medium” rating. That doesn’t mean the effort isn’t working. But proof of its success could be stronger.

While Hopkins didn’t name a single favorite solution, she praised initiatives such as the one in Borneo. “I am forever impressed by the programs that aim to improve access to health care, education and livelihood opportunities” of people living near biodiversity hotspots, she said.

Photo: A nurse gives a baby an immunization at a healthcare clinic on the edge of the Gunung Palung National Park in West Kalimantan, Indonesia. Photo by Stephanie Gee