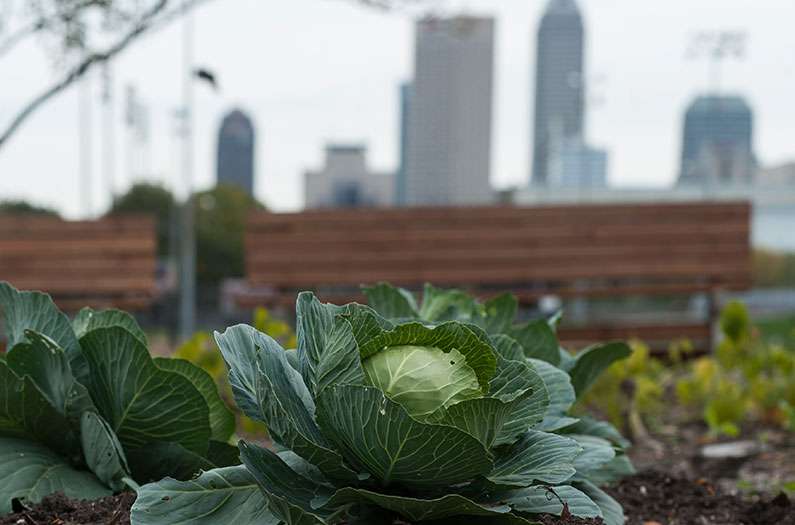 A first-of-its-kind meta-analysis of urban farms in 53 countries suggests that city plots can produce up to 4 times more food than conventional ones.
By Emma Bryce
August 26, 2022

Roof-grown lettuces and warehouse-cultivated tomatoes could be more than just a frivolous foodie trend: a new study finds that crops cultivated in cities can be up to four times more productive per square meter, than those grown in conventional agricultural fields.

The more controlled growing conditions, vertical production, and greater space efficiency provided by urban growing, are just some of the many reasons that could explain this surprising abundance, the new paper reveals.

Previous studies have explored how much of a city’s population urban farming can feed. But this study, led by a team of British researchers, is the first to compare, across dozens of cities, the actual yields of crops grown in cities with those cultivated on farms.

Such comparative data could be an important tool in guiding urban planning and policymaking to support urban farming—a trend that has many advocates, because of the potential environmental and social benefits of producing food closer to where it’s consumed.

So, seeking to plug this data hole, the study’s authors carried out a meta analysis that pooled data from 200 studies covering 53 countries, and which included over 2,000 accounts of crop yields grown in urban and peri-urban landscapes. The dataset incorporated dozens of crops—mostly vegetables, but also cereal crops, fruits, roots, tubers, and pulses—grown in two types of urban environments: ‘green’ spaces like community gardens and peri-urban fields; and ‘gray’ spaces such as vast rooftops and building facades.

The incorporated examples also covered a range of different urban growing methods, from open-air cultivation, to hydroponics, vertical food production, and controlled growing conditions inside warehouses and greenhouses for instance.

When they ran a crop-by-crop comparison, the researchers discovered that urban farms across all these contexts were producing even more food, or at least the same amount, as regular fields.

In fact, several crops generated between two and four times more yields than their equivalents in conventional fields. Tomatoes, for instance, produced yields of 18kg per square meter in urban systems, compared to 5.3 kilograms from regular croplands. Urban cucumbers and gherkins, meanwhile, showed the greatest comparative gains—weighing in at 17kg per square meter, compared to just 3.8kg in open fields.

These gains could be explained by the type of growing system in urban settings. For example, hydroponic growing systems that work well in cities not only produce more per area, because they can be stacked vertically; these growing conditions are actually better-suited and more supportive to the growth of watery vegetables like tomatoes, cucumbers and lettuce than soil-based growth in fields.

Urban crops are also more likely than conventional crops to be produced indoors and in more controlled environments—which described the growing conditions for 42% of the examples in the researchers’ dataset. Shielding crops from temperature extremes, pests and disease encourages higher yields; meanwhile controlling growth with light and temperature can also decouple food from the seasons, enabling more regular harvests than you’d get from crops grown outdoors.

What’s more, because urban farming relies mainly on manual labor, it may be more efficient, the researchers speculate, because it doesn’t need to devote any space to the passage of large farm machinery that tend to and harvest crops.

The clearcut comparison between urban and field-grown food belies a number of current unknowns, however. The researchers were careful to point out that it’s unclear yet how cost and energy-efficient urban farming really is, compared to conventional agriculture. There’s also a question about how city pollution affects the health and nutritional value of growing fruit and veg.

But, they leave these as lines of inquiry for future research. For now, the study contributes one crucial missing piece of data to the conversation about urban farming—which is also important because this form of food production actually contributes way more to our food system than many people might realize: around 15 to 20% of global food originates from urban and peri-urban land.

And, there may be many reasons to back urban agriculture and use these landscapes to grow even more of our food.

City farming shortens supply chains, which as we know from the pandemic are vulnerable to upheaval when they are convoluted and long. Shorter transport links can slash the emissions associated with conventional food production on far-away farms. Together, these factors can also make food more affordable and accessible to city-dwellers, potentially evening out some of the huge inequities in accessing fresh produce, which we see in some of the wealthiest metropolises on earth.

All these potential benefits underscore the importance of more data on urban produce, the researchers argue. Showing what urban farming could achieve, could help to carve out more space for in our expanding cities: “We need to understand realistically how much this form of growing could contribute to food security to help make the business case for it.”

Payen et. al. “How much food can we grow in urban areas? Food production and crop yields of urban agriculture: A meta-analysis.” Earth’s Future. 2022.