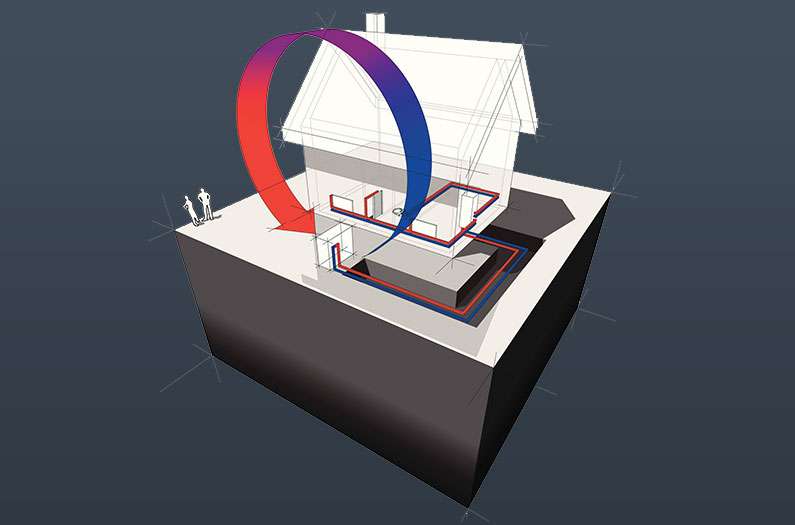 The remarkably simple new technology could lower the cost of owning a climate-friendly HVAC system and increase its adoption
By Prachi Patel
August 4, 2022

Electrifying homes and office buildings is going to be important to reduce the world’s reliance on fossil fuels. The big frontier in this area is heating and cooling, which in most parts of the world still relies on gas boilers and energy-hungry air-conditioning.

Heat pumps, which can run on renewable electricity to heat and cool indoor spaces, are a promising way to reduce building emissions. But they cost more than gas or oil furnaces and are expensive to operate because their energy efficiency decreases in cold weather.

Read:  The race is on to build an AC unit that doesn't cook the planet

“The technology will enable heat pumps that are more energy efficient and flexible, and thus more cost-effective than current designs,” says Zhibin Yu, professor of thermal energy at the University of Glasgow, and lead author of the paper. “That could facilitate the uptake of heat pump technologies, contributing to heat decarbonization.”

In 2020, around 180 million heat pumps were used globally. They are common in Japan and Norway, and their sales are increasing in the U.S. but adoption has been slow because of their capital and operational costs. According to the International Energy Agency, the number of heat pumps installed every year around the world must more than triple by 2030 to meet the net-zero emissions target by 2050.

Many European countries are now incentivizing the installation of heat pumps. The UK Government is targeting 600,000 heat pump installations per year by 2028. And the climate bill now being considered in the U.S. now provides incentives in the form of tax credits and rebates for homeowners installing heat pumps, among other things.

Heat pumps use refrigerants and electricity-driven compressors and pumps to transfer heat from outside air or the ground to indoor spaces during cold months. The cycle works in reverse for cooling during summer months. The technology is based on a process called the Evans–Perkins cycle that was originally designed for refrigeration. Researchers have been making continuous efforts to develop new methods to improve heat pumps’ performance.

Yu and his colleagues modified the cycle by adding heat storage in the form of a small water tank and a coil of copper tube. The water tank stores extra heat leftover in the liquid refrigerant after it has transferred heat to the central heating pump. When needed later, this stored heat, which has much higher temperature than outdoor air, can be recovered for the pump’s operation, reducing its power consumption.

“Our flexible heat pump technology does not require any new material or new techniques,” says Yu. “It uses the same set of components as the current heat pumps in the market, and the only difference is the introduction of a heat storage. Our research also shows that a sensible heat storage using water is potentially the most cost-effective option.”

Testing showed that the new system used almost 4 percent less power than current heat pumps. That’s not too high, but this is just the first step. With more optimization, the researchers plan to increase the efficiency up to its theoretical potential.