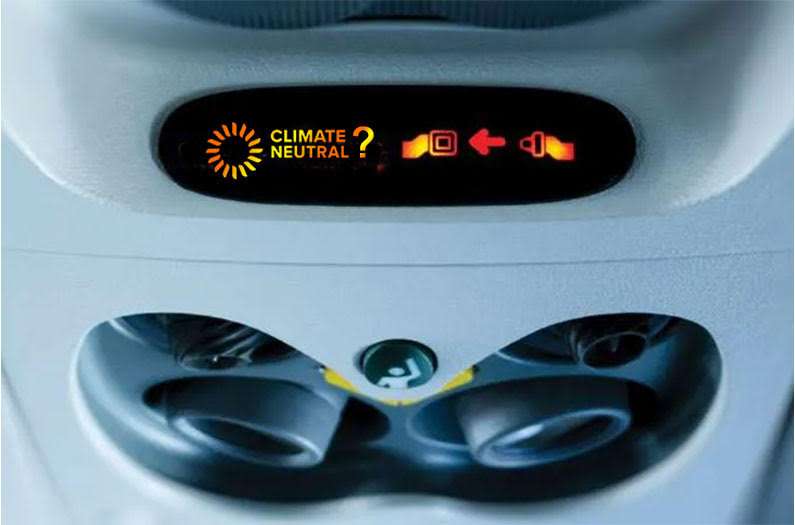 Airplanes affect the climate in complex ways. In addition to carbon dioxide, burning jet fuel produces water vapor, sulfur dioxide, soot, nitrogen oxides, and contrail clouds, all of which can affect global temperature. Emissions other than carbon dioxide – especially contrails, which are well known to have a warming effect – are responsible for two-thirds of aviation’s climate impact. But these emissions aren’t covered by current international climate agreements and other efforts to mitigate climate change.

Yet getting a handle on these non-carbon dioxide emissions is crucial in order to meet the Paris Agreement’s goal of limiting global warming to 1.5°C, a new study shows.

Researchers from the Swiss Federal Institute of Technology in Zurich modeled at the climate impacts of aviation under various scenarios. If aviation continues to grow at the expected rate and airplanes continue to primarily use fossil jet fuels, then aviation alone could contribute an additional 0.4°C of warming by 2100, the researchers report in Nature Climate Change.

Since the world is already running a little over 1°C hotter than during the pre-industrial period, “these additional temperature increases alone would lock in about 1.5°C global warming,” they write.

What’s more, using carbon dioxide removal to offset the carbon dioxide emissions from aviation – again, the only component of aviation emissions that’s addressed under current international agreements – would only mitigate about 20% of the warming, still leaving the world perilously close to the 1.5°C mark.

The findings suggest “that climate neutrality, and not carbon neutrality, is necessary to align the aviation sector with Paris-compatible climate change mitigation,” the researchers write.

But defining climate neutrality is difficult in the case of aviation because some climate effects of airplanes, such as those contrails, are short-lived. When such emissions stop, the climate cools relative to the time period immediately before. So the baseline relative to which aviation emissions are neutral matters – a lot, the researchers show.

Read:  Taking Off in Two Directions at Once

These three definitions of “climate-neutral” could result in very different outcomes for global average temperature, the researchers found. “Overall, the Gold and Silver definitions robustly achieve temperatures compatible with the 1.5 °C goal while Bronze locks in additional warming,” they write.

Achieving a robust definition of climate neutrality, again assuming current rates of aviation growth and continued use of fossil jet fuel, would require removing carbon dioxide from the atmosphere at rates similar to those required to make all other sectors of the global economy compatible with the Paris Agreement goal. And carbon dioxide removal is itself an uncertain and unproven proposition, “shedding doubt on feasibility” of this approach, the researchers write understatedly.

Technological advances, such as switching to zero-carbon fuels that burn cleaner and thus also result in less contrail formation, or zero-emissions aircraft powered by lightweight batteries or green hydrogen fuel cells, would improve the picture a lot. Those scenarios would require much less carbon dioxide removal, or even none at all, to achieve robust climate neutrality. The problem is that these technologies, especially zero-emissions aircraft, are pretty speculative at this point.

That leaves demand reduction – or in non-scientific terms, collectively flying less – as a strategy for reducing the climate impact of aviation that’s immediately within technological reach. The researchers mostly leave this implicit in the paper, but the logic is implacable: “While technology can theoretically reconcile aviation-demand growth and climate change mitigation, such reconciliation rests upon very ambitious and potentially unfeasible technological breakthroughs and optimistic assumptions on their ability to rapidly curb emissions,” they write.