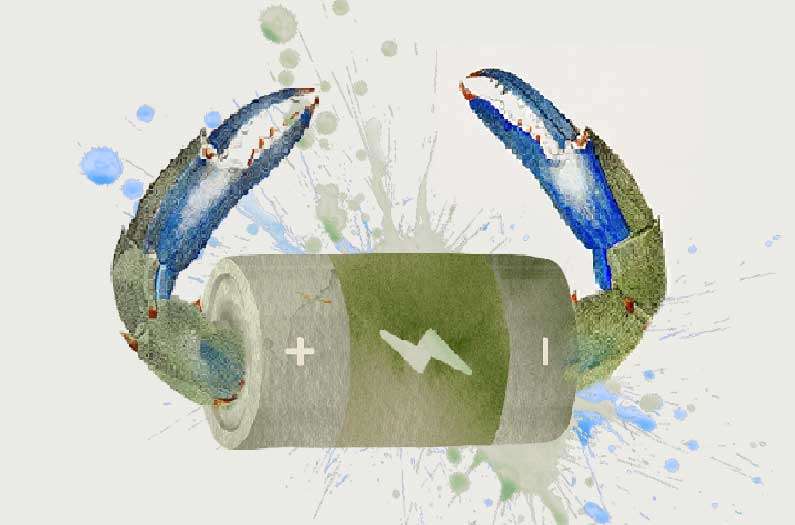 New biodegradable, recyclable battery is made of crab shells

Looking for a lithium alternative, researchers combined chitin and zinc to create a low-cost, long-lived battery with a smaller environmental footprint.
By Prachi Patel
September 8, 2022

A new battery made from crab shells and zinc promises to be fully biodegradable and recyclable. The safe, eco-friendly battery can be recharged at least 1,000 times, making it suitable for storing wind and solar energy for the power grid.

Lithium-ion is today the most widely used battery technology for grid energy storage. But the explosion of renewables and electric vehicles has put strain on the already tenuous supply chain of materials that go into lithium batteries.

Mining battery metals harms the environment. Plus, it is not easy or economical to recycle lithium batteries at the end of their lives, so most of the 15 million metric tons of discarded batteries the world is expected to produce by 2030 will likely end up in landfills.

Researchers at the University of Maryland and University of Houston wanted to make a more sustainable battery. They started with zinc-metal battery chemistry, which scientists have been developing for grid storage for several years. Zinc is much more abundant than lithium in the earth’s crust, so zinc-ion batteries are cheaper. But traditional batteries—made of zinc anodes, metal oxide cathodes, and water-based electrolytes—suffer from uneven deposition of zinc on the electrode surface, which makes them unsafe and short-lived.

So the researchers made a new biodegradable gel electrolyte from chitosan, a compound derived from chitin, the protein that makes up the tough shells of crustaceans such as crabs, lobsters, and shrimps. Chitin is usually thrown away as a byproduct of the food industry.

By combining chitin and zinc, they made a strong gel membrane that served as the electrolyte for the battery. They used zinc for the anode as usual, but replaced the conventional cathode with one made of a biodegradable organic material. The battery, reported in the journal Matter, maintained an efficiency of 99.7% over 1,000 cycles when operating at a high current density.

Two-thirds of the battery is biodegradable, making it very environmentally friendly. Both the chitosan electrolyte and cathode material biodegrade in soil in a few months, and the zinc left behind can be recycled. “In the future, I hope all components in batteries are biodegradable,” said UMD materials scientist and engineer Liangbing Hu in a press release. “Not only the material itself but also the fabrication process of biomaterials.”