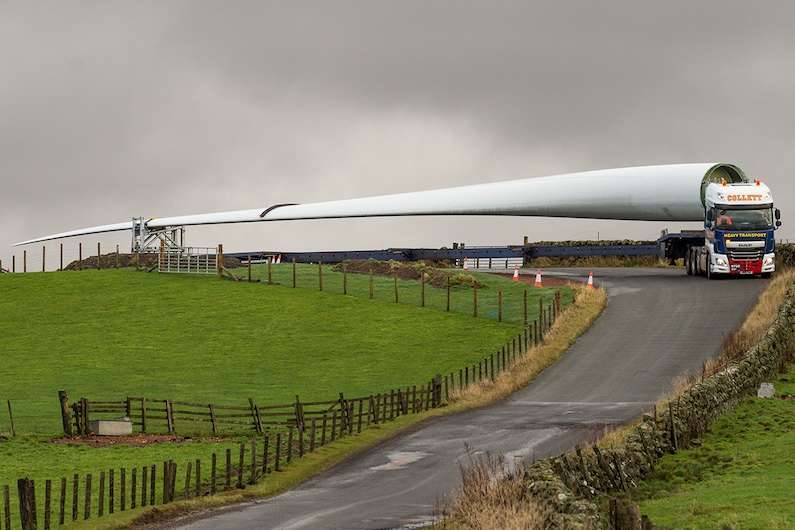 The world will produce over 40 million tonnes of turbine blade waste by 2050. A new resin makes it easier to turn them into valuable products.
By Prachi Patel
September 1, 2022

A typical modern wind turbine blade is about half the length of a football field. At the end of their 20-year lifetime, most of these large blades, made of fiberglass glued together with a resin, end up in landfills. As wind energy grows rapidly around the world, this unsustainable fate of a renewable energy technology is quickly becoming an issue.

Now, engineers at Michigan State University report a new resin that can be recycled into new turbine blades or many other products, such as countertops, car taillights, diapers and even gummy bears. They presented the work at the fall meeting of the American Chemical Society.

Wind turbines have gotten increasingly larger since longer blades can harness more wind energy. Some offshore windfarms will have blades twice as long as their land-based cousins. These blades wear out much earlier than the mechanical parts of wind turbines, and have to be replaced with newer ones.

Recommended Reading:
A simple paint job can save birds from wind turbines

Some companies are finding ways to recycle blades by shredding them and reusing the fiberglass and plastic resin to make cement and plastics. But the world will produce over 40 million metric tons of turbine blade waste by 2050, according to one study. That scale highlights an urgent need to make recycling blades easier.

To address the issue, chemical engineering and materials science professor John Dorgan and colleagues developed a new resin made of a synthetic polymer and the plant-based polymer polylactide, or PLA, which is used to make biodegradable packaging.

Fiberglass panels that the team made with the new resin were strong and durable enough for wind turbines and boat hulls. To recycle the panels, the researchers dissolved them in a solution and removed the glass fibers. The resin could then be used to make new panels or mixed with different minerals to make cultured stone for kitchen countertops.

What’s more, the researchers could also treat the recovered resin in an alkaline solution to make an acrylic material for car lights or the absorbent material used in diapers. With some more chemical processing, they made a food preservative called potassium lactate, with which Dorgan’s team made gummy bears.

The engineers now hope to make some larger turbine blades for field testing.