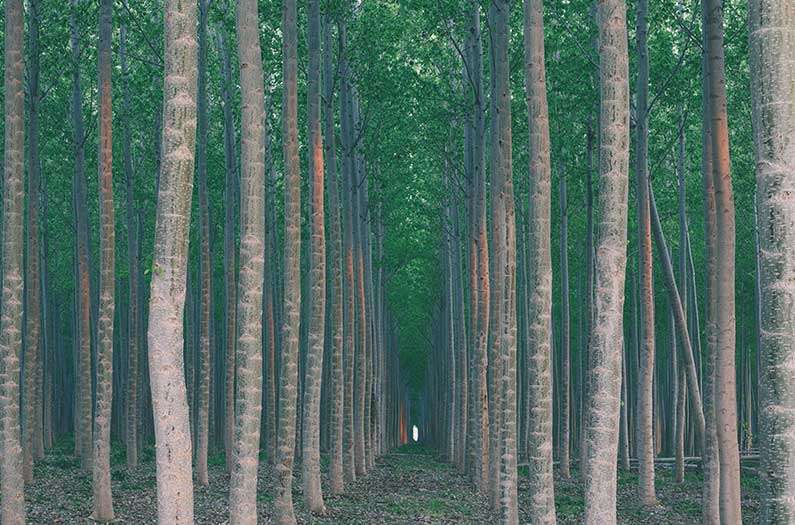 New breeds of poplar trees could produce enough fiber to replace a large share of cotton farming in Europe — freeing up that land for other uses.
By Emma Bryce
September 2, 2022

There’s a ubiquitous crop that slurps up unsustainable quantities of water, gets doused in chemicals and fertilizers to maintain its growth—and yet doesn’t provide us with any food. This crop is cotton, and it covers 34.5 million hectares of arable farmland around the world.

Now, a team of Swedish researchers propose that if we replace a share of this crop with fibers made from the wood of fast-growing poplar trees, we could free up millions of hectares of cotton land for growing food instead.

They also explore how a new processing method could make use of the whole tree, extracting bio-oils for fuel from the remaining wood. To boot, poplar forests could help to draw down carbon as they grow, the researchers report in the journal Joule.

Producing just one ton of cotton requires 2,955 m3 of water, and in the process generates untold amounts of pollution through fertilizers and other chemicals that wash off into freshwater bodies and cause eutrophication downstream. Organic cotton, grown with fewer or no chemicals, is one solution—but it currently makes up just of 1% global cotton production, and requires more land to produce.

This is part of the reason demand is now growing for more sustainable fibers such as viscose and lyocell, which are produced from cellulose in wood.

Fast-growing poplar trees are a good source of cellulose—and they don’t need cotton’s artificial inputs. So, the researchers on the new study were interested in whether this productive species could not only replace cotton, but also save on resources and, crucially, land.

They started out by looking at the available unfarmed ‘marginal’ lands in northern Europe that are suitable for growing poplar, homing in on countries within the Baltic Sea Region—which includes parts of Sweden, Poland, Germany, Lithuania, Latvia, Estonia, Russia, and Denmark. ‘Marginal’ lands are those that aren’t designated as forest land, and may be either inaccessible or low-yielding because of their sandy soils, and therefore unsuitable for farming.

Across these countries, they identified 4.6 million hectares of available marginal lands, just under 3% of the overall land area, where poplars could be grown without competing with agriculture.

Then, they modeled how much biomass poplar trees could produce across this area—but not just any poplar trees. Of special interest were two poplar clones (named SnowTiger and OP24) hat have been bred for their climate-resilient traits, making them productive even in colder northern extremes.

Within this, the researchers also explored the potential of a more efficient extractive method called ‘reduced catalytic fractionation’, to turn wood pulp into fibers and threads. This process can also extract oil as a byproduct from the 50% of wood that’s typically left behind after processing cellulose for fiber—and then use it to make biofuel.

Using growth data of the two poplar varieties, the researchers calculated that across the expanse of marginal lands in Baltic Sea countries, these trees could generate 2.4 tons per hectare of fibrous pulp each year. Over a 45-year period, during which the poplar tree ‘crop’ would be rotated twice, that amounted to 216 tons of viscose fibers per hectare.

What does that mean for cotton farming? With this level of production, poplar trees could in fact replace enough cotton to free up 42% of cotton-producing land across Baltic Sea countries for other uses, the researchers estimate.

What’s more, poplar growth would come with a side-serving of fuel, thanks to the researchers’ processing method which uses the whole tree: top branches and bark byproducts could be used as fuel for power-generation, while the catalytic extractive process would also release enough oil from wood to produce 314,834 tons of biofuel a year.

Meanwhile, stands of poplar trees can flourish without the vast amounts of fertilizer, chemical and water inputs that cotton requires, which also softens their environmental footprint. These reduced inputs, plus the carbon drawdown capacity of the trees, gives viscose production from poplars a lower overall emissions impact than cotton—coming in at about 2.4% less than regular cotton production in Sweden, for instance. “Fast-growing trees like poplars accumulate CO2 fast, as they grow fast and produce harvestable volumes of wood within 20 years,” says Anneli Adler, a researcher at the Swedish University of Agricultural Sciences, which developed the poplar clones.

These emissions savings may be lower than expected, because the drawdown benefit would be partially offset by the burning of tree byproducts, and also the emissions generated by the production of viscose fabric itself, which the researchers included in their calculations as part of a life cycle analysis.

Still, the advantages of poplar-derived threads stretch beyond emissions alone. Stands of poplar forest could harbor wildlife. They could also be interplanted with crops on farmland to support agroforestry principles and further expand cellulose production for clothes.

And, the potential could be huge. While the researchers focused their analysis on just one country, they calculate that across Europe there are 43 million hectares of marginal land that could be filled with poplar plantations, releasing large swathes of cotton farmland to other uses.

As such, making clothes from trees could bring an unlikely win for food security and the environment.