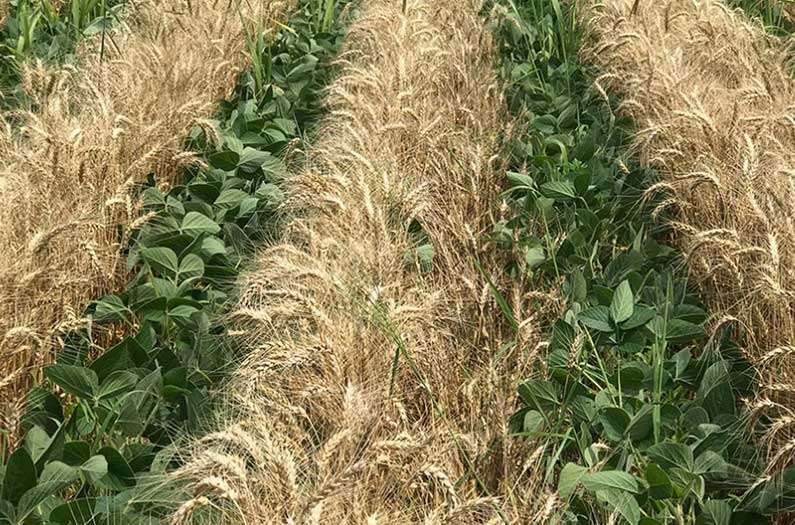 Seeds bred for monoculture become more suitable for intercropping when they're habituated to other crops, new experiments show.
By Emma Bryce
September 30, 2022

Crops bred specifically for monoculture can adapt to community living with a diverse array of other crops over the course of just two generations, a new study finds.

Modern day crops have been bred with specific traits that enable them to thrive in monoculture arrangements, allowing farmers to achieve high quantities and high yields of commercial species like wheat, across large swathes of land.

But there are unique benefits to be found in diverse croplands, especially for the environment. A community of different plants grown together can collectively resist pests and disease, and enrich soils with organic matter, boosting growth and potentially requiring less fertilizer and other chemical inputs. More diverse farmlands may also enrich habitat for animals. Meanwhile for smallholder farmers, a field full of diverse crops can be a buffer against losses of individual crops or changes in the market.

The problem is that when farmers, seeking these benefits, do try to diversify or ‘intercrop’ their farmland, they often rely on seeds bred for monoculture crops, which fail to adapt to the diverse conditions, sometimes outcompeting other crops and foiling the farmer’s plans.

The question of whether these traits could be reversed and monoculture crops be made more malleable, is what drove the ETH Zurich-led researchers to experiment.

Taking seeds from several monoculture crops including wheat, oat, and lentils, they grew plants in square plots in multiple different arrangements. Some plots contained just one type of crop—to mimic a monoculture—while others plots mixed together up to four different types. Some plots were fertilized and others were left unfertilized. They kept the experiment running for three years, sourcing the seeds for each new generation of planting from the crops grown the previous year—separating those grown in monocultures from those grown in diverse communities.

Recommended Reading:
The hype behind carbon farming comes down to earth

By the third generation and third year of the experiment, plants whose parents had grown within a medley of other crops had adapted to these mixed conditions, seeming to shed some of their dominant monoculture traits.

These crops were more cooperative in their growth, with the field experiments showing visible signs that they were competing less with other plants for real estate, compared to the offspring of crops grown in monocultures only.

The researchers thought this might be because the plants had each adapted to occupy a unique niche in the mix. But when they examined the development patterns of plants, they discovered that the plants had actually all developed very similar growth traits, for instance all growing taller to reach the light. It’s as if, instead of each one carving out a niche, they had instead adapted to share the available resources out more evenly.

The researchers aren’t sure what can explain this shift towards more collaborative growth in the reformed monoculture crops, but they suspect that the three generations of breeding would have been too short for any significant genetic changes to occur. Something else must explain the change—for instance epigenetic changes that turned some genes on and off, which might underpin the new adaptations. Also, seeds are accompanied by microbial communities that can mediate a plant’s relationship with the surrounding environment—and these communities may have been passed on to lower generations and also changed their growth traits, they explain.

Collaborative growth is one thing—but what about the yields from these newly-adapted mixed crops? That flags an important goal of intercropping—that more environmentally-sound farming methods ideally shouldn’t come with a trade-off of lower yields.

When the researchers compared the fertilized and non-fertilized crops, they found that yields were higher in plants adapted to grow in a more diversified mix – producing up to 58% more – but only when they were boosted by fertilizer. In the unfertilized conditions the crops weren’t any more productive.

This finding suggests that intercropping alone may not be able to achieve the yield increases that fertilizer can. But since diversified lands could bring a suite of other benefits for the environment and farmers, accomplishing this even with existing levels of fertilizer is still an improvement on the status quo of conventional farms.

In any case, the study shows potential for further adaptation of monocultures, by proving just how rapidly these land-hogging crop varieties can be reformed into plants that more sustainably share resources. For instance, going forward, selective breeding could be targeted at enhancing productivity under low-fertilizer conditions.

This study helps lay the groundwork for a change in how future farming landscapes might look, the researchers say. “Our findings have important implications for the shift to more diversified agriculture.”