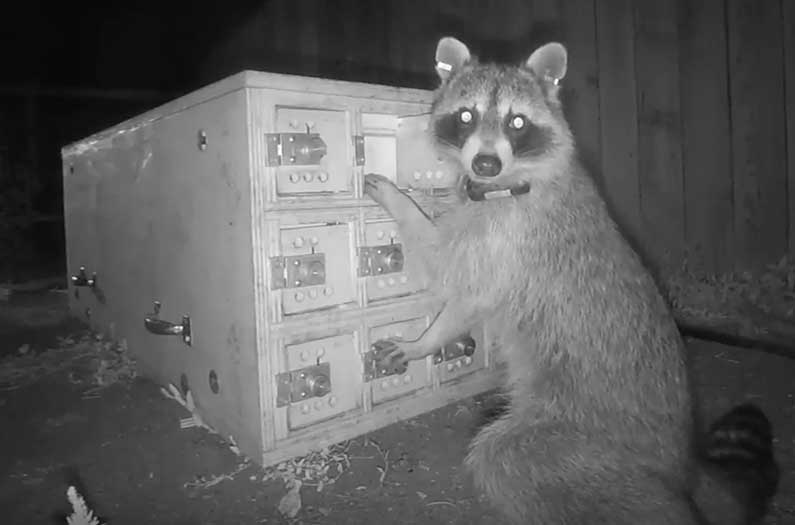 A new study suggests that city life favors quieter, cleverer raccoons—and that means culling the aggressive ones could be a poor strategy.
By Warren Cornwall
September 28, 2022

When it comes to raccoons, beware of the quiet ones. They’re the animals that might confound efforts to defeat their night-time trash can raids.

These masked, spaniel-sized bandits are renowned for their ability to outsmart human-erected barriers. They can break into locked trash cans, maneuver to dangling bird feeders, and even charm people into feeding them. There’s a reason why these animals have been dubbed “trash pandas.”

Now, scientists have found that among raccoons roaming the streets of Laramie, Wyoming, animals with more docile personalities were more adept at unraveling a puzzle to get food.

The results point to the ways city living might influence which temperaments thrive within a species. It also raises questions about whether efforts to deal with problem raccoons might be culling the more clueless animals and leaving the masterminds.

The experiment is part of a broader enterprise to plumb the depths of animal smarts and shed light on whether specific personalities make some animals better suited to survive in certain settings. In this case, researchers set out to test the puzzle-solving abilities of wild urban raccoons.

To do that, they gave several dozen raccoons a version of a classic test of animal intelligence often associated with lab rats, in which the animal gets a bit of food for pressing the correct button.

To perform this test in the wild, the researchers first trapped 204 raccoons in the 32,000-person Wyoming town between 2015 and 2019. They tagged the animals with tiny radio transmitters inserted under the skin between their shoulders, then released them.

Then, two year they set out tiny wooden booths during the night in a part of the town, each equipped with a sensor that detected which individual raccoons ambled in, much like a scanner at a grocery store. Inside, the booth featured two lit pushbuttons, a small chute that would disgorge a handful of hard dog food, and a video camera to record the animals’ behavior.

To entice the animals to take the test, the machine was programmed to spit out treats three times a night to any animal that simply approached the box. For raccoons that ventured through the door, the tests grew increasingly more complicated. Animals that pushed either button would get a dog food reward 11 times. After that, they could only earn more food by selecting a specific button. Finally, in the most advanced test the machine switched the correct button to the other one. Scientists counted how many wrong tries it took before the raccoon was able to figure out that the correct solution to the puzzle had changed, something called “reversal learning.”

As scientists discovered when reviewing the video recordings, not everything was smooth sailing. In some cases, raccoons that learned of the free handout would try to crowd into the booth. At times, the crush, in the dry lexicon of scientific papers, resulted “in displacement from the testing device.” i.e., some raccoons tossed other ones out of the party.

Such incidents shrank the number of animals that produced reliable results. Of 40 raccoons detected by the machines, a total of 10 made it through all the tests undisturbed.

When the mishaps were sorted out, some patterns became clear. Younger animals were more like to become comfortable with the testing devices, perhaps because they were less experienced and more adventurous. But once inside, adults had more success with the puzzle. And the best test-takers were raccoons that had been more docile when trapped, according to results published Sept. 22 in the Journal of Experimental Biology.

The result “suggests a potential relationship between emotional reactivity and cognitive ability in raccoons,” said lead author Lauren Stanton, who is now a postdoctoral researcher at the University of California, Berkeley.

In other words, the animals that were less aggressive and calmer also might be better equipped to solve a puzzle.

The results raise the prospect that cities, with their complex, ever-changing environments, might shift raccoon populations toward quieter, cleverer animals. And government officials called to deal with raccoons might be doing the same thing, the researchers noted. If trappers wind up capturing primarily aggressive, noisy animals, they could be missing the ones most likely to crack the latest supposedly raccoon-proof trash can.