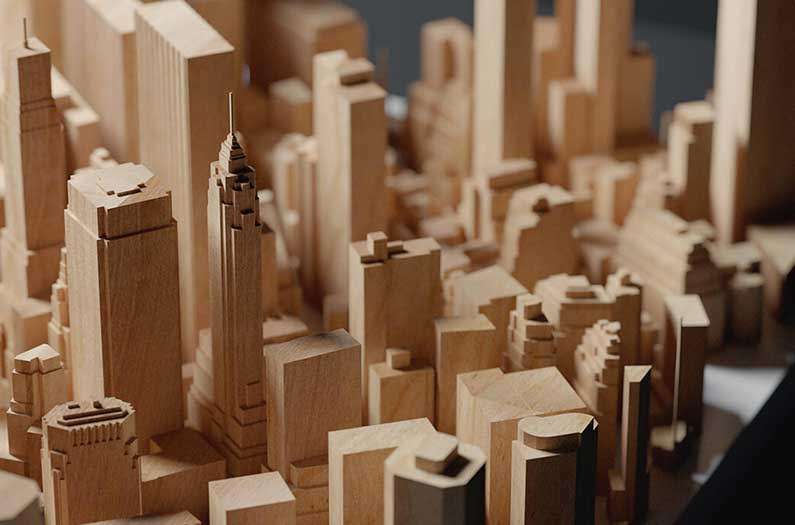 Should the climate-friendly city of the future be made of wood?

New study is the first to analyze how a large-scale transition to timber cities could ease the strain on carbon budgets without compromising food production and biodiversity
By Sarah DeWeerdt
September 6, 2022

Using wood to construct new residential buildings in the world’s rapidly growing cities has the potential to avoid more than 100 gigatons (Gt) of carbon emissions between now and the year 2100, according to a new study. The figure represents about 10% of the remaining global carbon ‘budget’ to keep warming within 2 °C.

More than half of the global population lives in cities, and that could increase to 80% by 2100. Those new urban dwellers will need places to live, but today most residential buildings are constructed from steel and concrete – notoriously carbon-intensive materials.

So, people have started to think about constructing buildings out of engineered wood – a type of building material made of small pieces of wood glued or laminated into larger beams and panels that can support mid-rise and even high-rise buildings. The idea is that engineered wood products are much less carbon-intensive than cement and steel, and the wood itself represents long-term carbon storage to boot.

A previous study showed that wooden buildings could store up to 20 Gt of carbon over the next three decades, turning urban infrastructure into massive pools of stored carbon even greater than those in natural forests on an acre-for-acre basis.

Recommended Reading:
Turning scrap wood into innovative products could be a huge win for curbing carbon and wildfire

The problem is that increased harvesting of wood from natural forests can erode biodiversity, and establishing more tree plantations can conflict with other land use priorities such as agriculture. “Until now, research did not account for the competition for land between agriculture and forests,” says study team member Abhijeet Mishra, a graduate student at the Potsdam Institute for Climate Impact Research in Germany. “We looked into how and where does the wood come from if we transition to timber cities of the future.”

Housing 90% of the world’s new urban population in wooden buildings would save a total of 106 Gt of carbon emissions, making overall cumulative emissions 77% lower than in the business-as-usual scenario, the researchers report in Nature Communications. The carbon savings could be even greater if engineered wood is used to replace or remodel existing buildings as they come to the end of their lifetime.

To provide all that new wood, global forest plantation area would need to increase from 137 million hectares (Mha) today to 425 Mha by 2100. (The timber plantation area is 143 Mha greater than would be required in the business-as-usual scenario.) However, the model shows that it’s possible to achieve that expansion without encroaching on biodiversity hotspots, old-growth forests, or protected areas.

At a global level, new timber plantations need not interfere with agricultural land, either, the analysis suggests – although land-use competition may occur at a local level. A doubling of agricultural intensification would also be required to feed the world’s population on the available cropland.

New timber plantations and croplands would be established on unprotected natural forests and non-forested areas of natural vegetation. This could result in an erosion of biodiversity and soil carbon stocks, the researchers acknowledge. “Timber plantations are not ‘the’ solution but they can part of ‘a’ solution,” Mishra says. “We would need strong governance and careful planning to sustain this plausible transition to future timber cities.”

Recommended Reading:
Researchers have now made wood that you can fold and mold

Still, the overall impact of timber cities is much lower than that of cities made from conventional building materials. Land clearing for forest plantations results in carbon emissions, but then the growth of new trees more than compensates for these emissions, the researchers found. And manufacturing engineered wood products causes modest carbon emissions, but the wood products themselves store many times more carbon than is emitted to manufacture them.

Source: Mishra A. et al.  “Land use change and carbon emissions of a transformation to timber cities.” Nature Communications 2022.