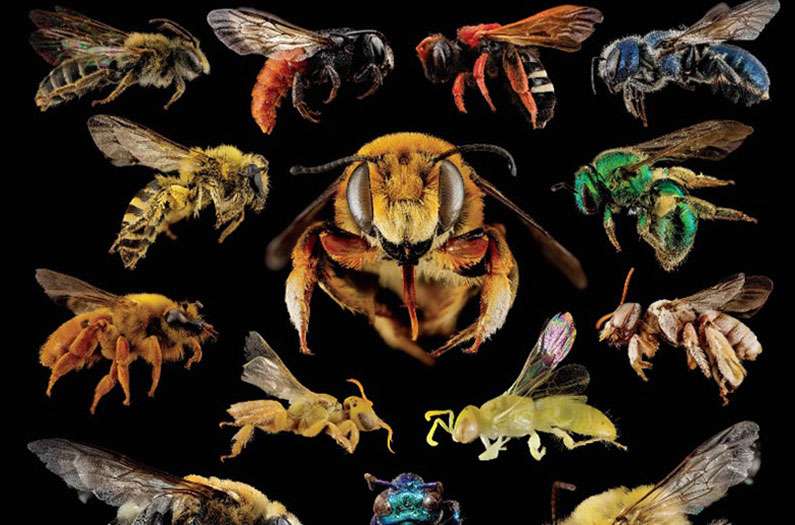 Crops benefit from a diversity of pollinating bees, and the benefits grow the longer scientists track them.
By Warren Cornwall
September 21, 2022

The risks that come with farming can make playing the stock market seem tame. A hail storm, unexpected drought or flutter in the price of fertilizer can make the difference between a profitable year and ruin.

Financial whizzes recommend investing in a diverse range of stocks to guard against market gyrations. Farmers, too, can benefit from diversity, say scientists. But this kind comes on the wing.

While most people might associate domesticated honeybees with pollination of farm fields, it turns out dozens of wild bees can visit the flowers of a single crop. And new research tracking fields of watermelons and blueberries over several years suggests that a one-time snapshot of bees frequenting a field underestimates the variety of species needed to ensure a good crop.

“You do actually need more bee species in order to get stable pollination services over a growing season and over years,” said Natalie Lemanski, a postdoctoral researcher at Rutgers University who helped lead the work.

There is a growing appreciation for the importance of all kinds of diversity in ecosystems. Genetic diversity within a species helps ensure organisms can adapt to changes in their surroundings and reduces the risk of inbreeding, a problem for endangered species. Habitat diversity can increase the odds that a species will find a place to thrive. Taking a cue from the financial sector, salmon researchers in Alaska dubbed this the “portfolio effect” after finding that a key to the robust sockeye salmon runs of Bristol Bay was the myriad small rivers lacing the region.

But when it comes to pollinators and crops, the effects of diversity have been less evident. In part, that’s because at any given moment, a flowering field might be dominated by just a handful of these creatures. But Lemanski and collaborators at Rutgers and the University of California at Davis wanted to see if that picture changed when they expanded the view to encompass peek blooming seasons over several years.

To get this longer view, the scientists repeatedly visited 77 blueberry and watermelon farms in New Jersey and California over six years. With each visit, they netted all the bees targeting crop flowers in designated parts of a field. They counted which species were present and in what numbers. All told, they found more than 70 different wild bees.

To understand how these different species influenced the fate of the crops, they tested how many pollen grains each type of bee delivered to a flower. Then they calculated how many bees of the different species found at a farm on a single visit were needed to produce half the pollination levels they actually observed.

Over time, the picture that emerged was of a cast of characters that changed throughout the flowering season, as well as from year to year. All told, two to three times as many species of bees were needed to reach pollination targets during the peek blooming season, compared to the number of species found in the fields during a single visit.

The importance of diversity grew even more apparent over the course of several years. Twice as many kinds of bees were needed to hit pollination targets over six years than for any single year, the scientists reported Sept. 7 in Nature Ecology & Evolution.

“This research shows that abundance (of bees) matters, but bee diversity matters even more,” said Michelle Elekonich, the deputy division director of branch of the National Science Foundation that funded the study. “It’s not the same bees that are abundant at a given point in time, and variety is necessary to provide balance during a growing season – and from year to year.”

Lemanski hit on yet another economic term to explain what is likely happening: The “insurance hypothesis.” Much like various streams for Alaska salmon, more species could offer a kind of cushion, in which one bee species steps in to play an important role if, for some reason, another bee fails to turn up in large enough numbers.

The research doesn’t pinpoint why such a large variety of species were needed for the fields they studied. There are, however, some leading contenders.

One explanation is that the life cycle of a single bee species doesn’t match perfectly with the times when the crops are flowering. That would mean different bees take center stage at different moments. Likewise, changes from year-to-year, such as the weather, could shape which bees are present during crucial pollination windows. That could help explain why the number of critical species grew the more years the scientists studied.

Since the number of species needed to reach pollination targets kept rising as scientists added more years, it’s possible that number could rise still higher if they watched for longer, said Lemanski.

Another possibility is that diversity helped during times when no single species was very abundant. Weeks or years when those numbers are low could lead to an “all hands on deck” situation, the scientists wrote, in which more species are needed to generate enough pollination.

While this study focused on domesticated crops, the importance of a wide range of bees could be even greater in natural ecosystems, since the pollination season is greater when different plants flower at different times.

News that both the variety and sheer number of pollinators is important could add to concerns about an alarming decline in overall insect numbers. For those who think in terms of money, consider it fewer shares on the stock market.