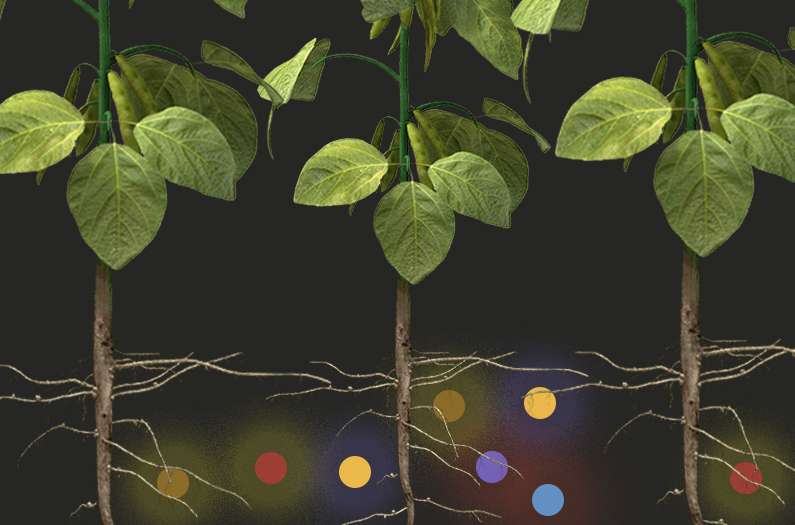 Brazil has saved billions in fertilizer costs and averted the release of millions of tons of carbon by inoculating soybeans with soil microbes.
By Emma Bryce
October 7, 2022

Replacing synthetic fertilizer across Brazil’s vast soybean crop with ‘biofertilizer’ has reduced carbon emissions in the country by 430 million tons of CO2-equivalent each year, a new analysis shows.

Since the 1960s, Brazilian farmers have been testing biofertilizer alternatives to synthetic nitrogen fertilizers that come with heavy environmental costs in the form of greenhouse gas emissions and water pollution from excesses in the soil.

The active ingredients in biofertilizers are live diazotrophic bacteria—microorganisms that can turn nitrogen in the existing environment into nutrients for crops.

Using an enzyme, the soil bacteria transform atmospheric nitrogen into ammonia, which can be directly absorbed by plants. When crops roots are ‘inoculated’ with these bacteria, the microorganisms provide a direct line of ammonia to the plant body—an altogether more efficient process than traditional fertilizer application, which, when spread imprecisely, often leaves large amounts of raw nitrogen unused and prone to polluting.

The science of biofertilizers is still in development, with researchers trialing different microbes and tweaking their genetics. But for 60 years already, Brazilian farmers have been pioneering its use, inoculating their soybeans with varieties of bacteria. Today, almost 80% of the country’s 36 million soybean crop is grown using biofertilizer.

Since Brazil is also the world’s largest exporter of soybeans for food and cattle feed, this represents a significant real-world experiment on the benefits of biofertilizer.

A review, recently published in Frontiers in Microbiology, collated the results of several scientific studies on Brazil’s biofertilizer applications and found that without this large scale, long-term intervention, farmers would have used an additional 20 million tons of nitrogen a year—equivalent to 43 million tons of urea—to support the country’s soybean farms.

Recommended Reading:
The scary future of nature with less nitrogen

There have been majorg cost savings as well. It costs roughly US$190 to fertilize one hectare of farmland using traditional means, compared to under US$10 using biofertilizers, the authors explain. Altogether, this means that replacing synthetic fertilizers across the majority of soybean crops has generated savings of roughly US$10.2 billion in Brazil.

The case study could hold valuable insights for the rest of the world. According to a separate recently-published study, synthetic fertilizers account for a significant 10% of agricultural emissions and 2% of global emissions overall. Increasing the efficiency or reducing the use of synthetic fertilizers, is therefore a low-hanging opportunity to bring down the emissions associated with our food systems.

The success of Brazil’s intervention could also propel the search for bio equivalents to other synthetically-produced crop nutrients such as phosphorus. In fact, the Frontiers review—which was part of a multinational EU-funded research project called MicrobiomeSupport—examines new attempts to use fungi to break down naturally-available phosphorus in the soil for plants to use.

As the biofertilizer success story in Brazil receives some overdue recognition, the researchers believe it’s helping spur innovation in other staple crops such as wheat and rice. “We now have a large number of startups and research centers interested in developing new microbiome products for different crops,” they write. “The economic and environmental protection numbers are impressive.”

Olmo et. al. “Microbiome Research as an Effective Driver of Success Stories in Agrifood Systems – A Selection of Case Studies.” Frontiers in Microbiology. 2022.