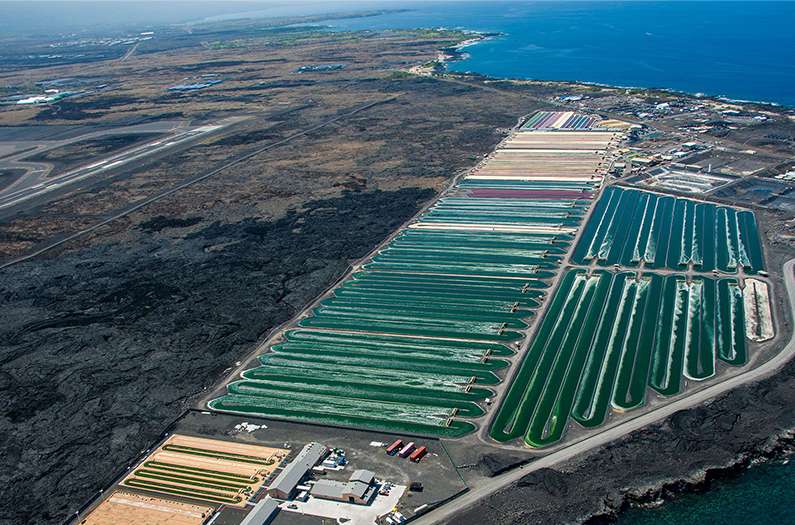 These nutrient-rich algae, farmed along coastlines in pounds of seawater pumped up from the ocean, could produce enough food to feed 10 billion people in the next 25 years—“while simultaneously reducing our demands for arable land and freshwater,” says Charles Greene, lead author on the new Oceanography study and professor of earth and atmospheric sciences at Cornell University.

He and his research team relied on GIS models to identify locations across the planet that are close to the sea, and have the right levels of sunlight to propel the growth of single-celled algae, which can grow 10 times faster than regular crops.

They identified the most suitable locations in southern parts of the planet—which may help shift centers of global food production from the north to the south, the researchers believe. If produced across the identified area, algae alone could generate more than the total planetary protein demand projected for 2050—an amount of roughly 286.5 Mt per year. That’s in addition to providing a rich source of minerals and omega-3 fatty acids, among other things.

Algae could do this using one-tenth of the area required by conventional food sources to produce the same amount of food. Meanwhile, much of that land would be in places, like coastal desert environments, where it doesn’t compete with other uses.

The algae’s highly efficient growth could make it an attractive prospect for a food system that faces increasing constraints on land and on marine resources, the researchers argue. Farmed algae would also require less resources—no soil, no freshwater, and less fertilizer —than conventional crops, they show.

To illustrate this they compared algae with the protein generated through global soybean cultivation. Producing the equivalent amount of protein from algae would save 160 billion cubic meters of freshwater—roughly the amount currently used to irrigate all crops across the US.

Meanwhile, because fertilizer applied to grow algae is contained within the seawater-fuelled ponds, there’d be no excess runoff and the lagae would instead use it all. Compared to global soybean farms, therefore, algae production would save around 164,000 tons of phosphate, or about 3.2% of current US fertilizer demand.

All that is in addition to the emissions savings that would come with algae’s more efficient fertilizer and land use.

Some estimates predict we’ll need a 56% increase in food supply to feed the planet by 2050—requiring potentially vast amounts more land, water and fertilizers. But algae farming could provide a unique pressure-release valve for the environment, the authors say.

As for how to make algae palatable to consumers, Greene explains that when dried and powdered, the algae could be “added to the supply chain for meat substitutes, cheese substitutes, dairy substitutes, and baked-good substitutes. The marketed products will have the taste, look, smell, and texture of the foods that people have traditionally consumed.”

He added that plenty of countries, especially in Asia, already consume algae as part of a regular diet. Algae additives are already part of several widely-eaten foods.

There are a few caveats the researchers recognise in their projections, such as algae’s huge nutrient demand, which would eat into global phosphorus reserves and may require alternatives. Rapidly-growing algae also absorb CO2 faster than it can diffuse from air into water, meaning additional CO2 would have to be pumped into algae ponds to aid growth — which could be costly in both energy and financial terms.

These may prove to be big hurdles to overcome. But whatever the case, we need to make some shifts away from our conventional food systems if we’re going to meet future challenges.

Algae farming is one vision of how to do that—and it could contribute “significantly to reducing the carbon footprint of our food production system and the detrimental environmental impacts of agriculture,” Greene says.