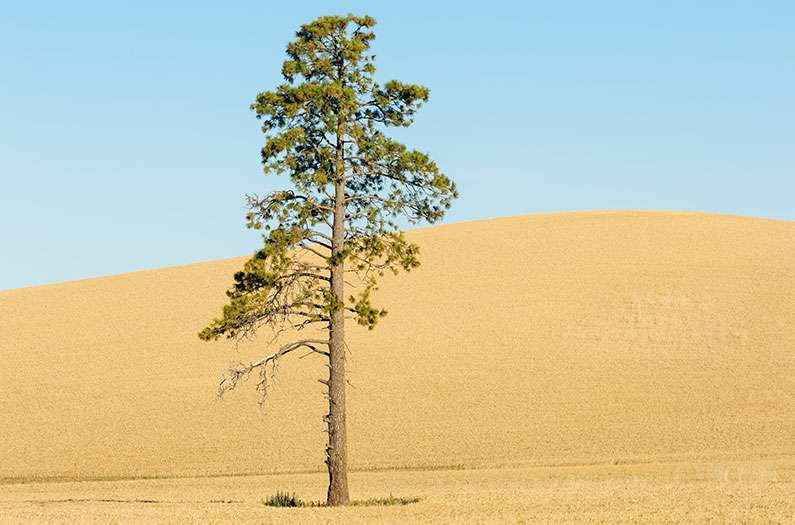 When planting a tree can actually fuel global warming

A new study disproves a widely accepted hypothesis about the climate benefits of growing forests in semi-arid places. The problem comes down to the color green.
By Warren Cornwall
October 5, 2022

Planting trees has long been seen as wholesome and planet-friendly. That’s true now more than ever, thanks to their ability to suck carbon dioxide from the air.

But what if putting a new tree in the ground actually helps fuel global warming? In arid, naturally treeless parts of the world, that often appears to be the case, according to new research.

The findings by a team of Israeli scientists point to a potential downside for tree-planting initiatives in dry places around the world. In Saudi Arabia, the Saudi Green Initiative promises to put 10 billion trees in the ground and turn “the desert green.” China’s “Great Green Wall” program aims to plant 88 billion trees to reclaim parts of the growing Gobi Desert. A project with the same name is being pursued in Africa across the southern edge of the Sahara Desert.

“When we began the research, we expected to show that extensive planting of forests in semi-arid areas would significantly slow down climate warming,” said Yohay Carmel, an ecologist at the Technion-Israel Institute of Technology. “But our study disproved this accepted hypothesis. It is disappointing indeed.”

Recommended Reading:
How to Plant the Forests of the Future

The problem comes down to the color green—and how reflective leaves are. While plant foliage cools places by creating shade and moistening the air, green leaves also absorb more heat from sunlight than lighter-colored landscapes such as sand and sparse, grassy vegetation. The difference in how much sunlight is reflected—called albedo—can offset some of the planet-cooling benefits of stashing carbon dioxide in plant trunks, branches and roots.

While this dynamic is well known, it wasn’t understood to what degree the absorbed heat canceled out the climate benefits in dry landscapes. To get a clearer picture, Carmel and his fellow researchers first generated maps of all the places in the world that weren’t forested, but where rainfall, temperature and other conditions made it possible to grow trees. Then, relying on satellite observations and computer models, they estimated how much carbon would be sequestered by planting trees on these landscapes over the course of 80 years, as well as how much the albedo would change.

Overall, if trees were planted on nearly 4.5 million square kilometers of suitable dry, unforested land around the world, two-thirds of the cooling benefit from carbon sequestration would be erased by the added heat, the scientists reported in Science on Sept. 22.

The final benefits amount to around 9.7 billion tons of carbon over 80 years, approximately 1% of total carbon emissions over that time if greenhouse gas pollution continues to grow at a steady pace. There is “an important lesson here,” said Carmel. “Planting forests, no matter how extensive, will not save us from climate change. Instead, we should focus on reducing emissions.”

The results varied dramatically from one place to another. Areas at lower latitudes closer to the equator, including South Africa and northern Australia, tended to fare well, with carbon uptake from plant growth outstripping heat absorption. The reverse was true in places at higher latitudes, such as Kazakhstan and Mongolia. Countries in the middle, such as China and the U.S., were more of a mix. A digital map allows people to see where the tradeoffs make climate sense, and where they don’t.

Rather than ruling out tree planting as a tool for tackling climate change, the scientists say people could be smarter about where to do it. By planting only in places where the cooling benefits outweigh the heat captured, the net benefits would nearly double to the equivalent of 17.7 billion tons of captured carbon. “Planting trees in areas with potential net climatic cooling effects, could significantly increase the contribution of such actions to climate change mitigation efforts,” said Shani Rohatyn, who led the research as a PhD student at Technion.

The relative importance of such tree planting grows further if nations cut carbon pollution dramatically and plant trees in dry areas where forests once grew and where they don’t grow very close together, as well as places largely devoid of trees. In this more ambitious scenario, the trees could absorb nearly 20% of total emissions over 80 years, the researchers found.

The scientists also didn’t weigh other potential benefits of such tree planting campaigns. Rohatyn now works for the Israeli government’s forest agency. Trees are being planted in parts of the country where they might contribute to climate warming. But they can also reduce soil erosion, control runoff, restore degraded land and provide places for people to recreate, said Rohatyn. “Tree planting is a powerful tool to provide diverse ecosystem services,” she said. Carbon sequestration “can and should be treated not only by planting trees.”

Photo by Dave Hoefler on Unsplash