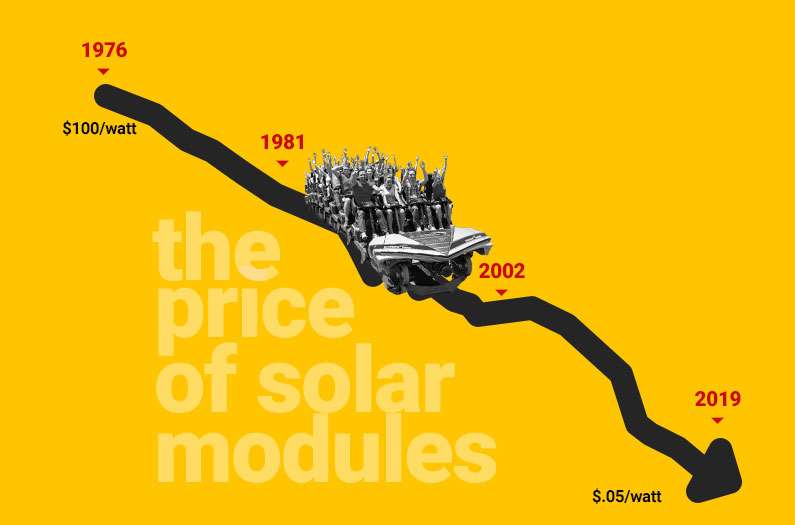 A new, evidence-based method for calculating the cost of the switch suggests decarbonization is wildly cheaper than the status quo.
By Sarah DeWeerdt
October 4, 2022

A rapid transition to green energy is likely to save the world trillions of dollars compared to sticking with the current fossil fuel-based energy system, according to a new analysis.

The savings could amount to $12 trillion, and represent the cost of energy alone – not any benefits from curtailing climate change. “The green energy transition is going to save us money, and the faster we get on with it, the more we’ll save,” says study team member Rupert Way, a postdoctoral researcher at Oxford University in the UK.

Researchers have known for a while that conventional ways of modeling the energy transition consistently overestimate the costs of decarbonization and underestimate the rate at which green energy technology can be rolled out.

And when those pessimistic forecasts get folded into reports from the Intergovernmental Panel on Climate Change (IPCC) and other institutions, cost concerns become a barrier to climate action.

“The belief that the green energy transition will be expensive has been a major driver of the ineffective response to climate change for the past 40 years,” Way and his colleagues write in the journal Joule. Typically the conversation about decarbonization contrasts benefits like reduced air pollution and slowed climate change with the drawback of higher costs. “Our analysis suggests that such trade-offs are unlikely to exist: a greener, healthier, and safer global energy system is also likely to be cheaper,” the researchers write.

The crux of the matter is that key green energy technologies like solar and wind power are more like computers than they are like fossil fuels.

Fossil fuel prices are volatile in the short term, but stable in the long view: adjusted for inflation, fossil fuels cost pretty much what they did 140 years ago. But the cost of solar panels, wind power technology, and batteries has been dropping by about 10% per year over the last several decades. Meanwhile, the deployment of these technologies has also been increasing exponentially.

Recommended Reading:
The Wild Ride of This Energy Transition

Many people are familiar with Moore’s law, which holds that the cost of certain technologies decreases exponentially over time, to explain the falling cost of electronics. The researchers used a similar principle known as Wright’s law – the cost of a technology drops exponentially as its use increases – in their analysis. Another way of thinking of this is as a learning curve where cost drops as experience increases.

The researchers used historical data on costs and deployment of more than 50 different energy technologies to forecast their future cost in three scenarios: a fast transition which would have the world eliminate fossil fuels by 2050, a slow transition that stretches the switch out to 2070, and no transition in which fossil fuels continue to dominate the energy system.

There is roughly an 80% chance that a fast transition to a green energy system will be cheaper than sticking with fossil fuels, the researchers report.

Sober-sounding analysts often counsel a slow rollout of green energy to save on costs, but in fact a fast transition is likely to be cheaper than a slow one, the researchers found. “The faster we scale up these clean energy technologies, the faster their costs will continue to fall, and the easier it will be to displace expensive and polluting fossil fuels,” explains Way.

A 2022 IPCC report warned that decarbonizing the energy system in line with the goals of the Paris Agreement would result in a 1.3-2.7% loss of GDP worldwide. But the new analysis suggests that deep decarbonization is actually likely to raise global GDP.

The study doesn’t address exactly which policies will be needed to ensure the green energy transition is fast enough to be cheaper than the status quo. But Way says two strategies that could likely help are expanding and upgrading electricity grids worldwide, and supporting the development of green fuels over the next decade.

“Also, it’s worth remembering that the main results of our paper refer to just the transformation of the energy system,” he says. Once the costs of climate damages are factored in, the fast transition is likely to be tens or hundreds of trillions of dollars cheaper than the fossil fuel system. “There really appears to be very little downside to pursuing a rapid energy transition, and almost certainly a vast upside,” he says.