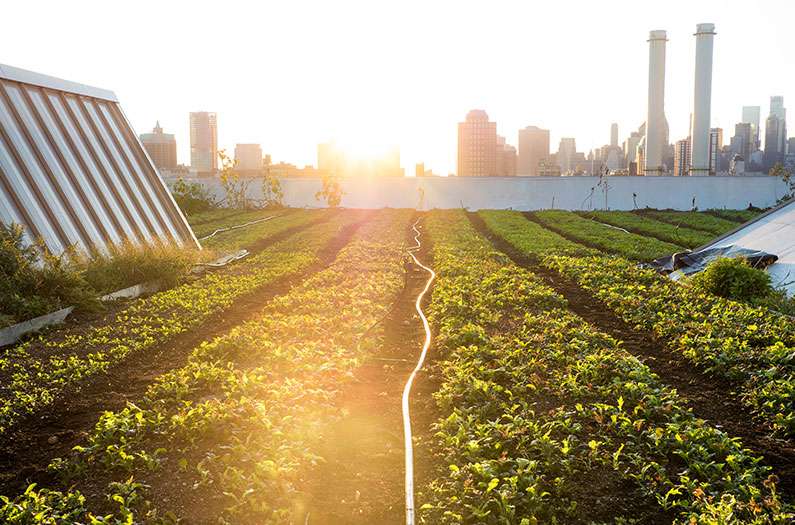 In buildings with lots of people, CO2 emissions from human respiration is surprisingly high; a research team wondered if HVAC could be unlikely companion to food production.
By Emma Bryce
November 4, 2022

Researchers have grown a farm of rooftop vegetables bathed in the CO2-rich exhaust air from city buildings—a somewhat dystopian idea which nevertheless boosted plant growth by an incredible 400%.

Their research turns building vents into an unlikely companion to food production. Many people will recognize these silver, mushroom-shaped structures that are visible on urban roofs: they form part of HVAC systems that pump out stale air and ventilate buildings with fresh air from outside. In buildings where lots of people live and work, the CO2 emissions from human respiration can reach surprisingly high levels, which is why these systems are needed to keep the air fresh and unpolluted.

But for the researchers on the new study, the thinking was, why let all that pent up CO2 vanish into thin air, when it’s a key ingredient in fertilizing plants and promoting their growth?

The majority of urban dwellers spend their time indoors—and so cities have a potentially huge and steady supply of CO2 that’s going untapped. These wasted emissions “can be used as a resource to create better growing conditions for plants,” says Sarabeth Buckley, plant scientist at the University of Cambridge and lead author on the study.

So between 2018 and 2019, Buckley and colleagues started their experiment on the roof of the Boston University campus in the United States, a building heavily populated by students during term time.

At each of the rooftop vents, the researchers planted neat rows of spinach and corn. Their vegetable patch was laid out in such a way that some plants were beside vents that emitted air from inside the building, while others were planted beside control vents that emitted regular atmospheric air. The plants were also exposed to more or less air power from the vents, to determine the impact of high winds on plants’ ability to use the CO2.

The researchers choose the two respective crops because on the one hand, spinach uses a metabolic pathway that is highly responsive to CO2, whereas corn uses another pathway that makes it less sensitive to elevated amounts of this gas—allowing the researchers to test the benefits of their system across different types of crops.

In addition to the rooftop vegetable planting, the researchers also installed CO2 monitors inside the rooms occupied by students, as well as beside the rooftop vents: this gave them a read on how much CO2 was available to plants when it was channeled out the building.

They found that when classes were in session, CO2 levels spiked noticeably—reaching above the recommended 1000 parts per million (ppm) for building interiors for 37% of the time that the classes were in session. This was also well above the 800 ppm of CO2 that plants need to receive a growth boost—so on the rooftop, this resulted in huge growth spurts for the veg.

This was most notable for the spinach, whose biomass increased fourfold beside CO2-emitting vents. Where spinach was grown beside vents that mimicked high wind speed, they still had double the biomass of spinach grown without the added dose of CO2. In fact in all cases where spinach was cultivated besides CO2-blasting vents, the plants were larger and had more leaves.

The researchers have questions remaining about whether this elevated CO2 affects nutrient levels in plants. But they also see huge potential benefits resulting from what they’ve found, which might collectively help build the case for urban farms.

Rooftops typically take up 20-30% of urban space, area that goes mostly unused.  Looking at the available rooftop area for growing food in the city of Boston where the study was based, the researchers found that if we grew vegetables there and then added CO2 building exhaust to the mix (and assuming also that crops of different varieties would benefit similarly), the city could in fact produce enough food to satisfy 290% of its own vegetable demand.

Add to this the several general benefits of rooftop farms. Rooftop gardens can create insulation in winter and have a cooling effect in summer, saving on energy use and the associated emissions. The production of more local food also cuts back on the high transport and emissions cost of ferrying in food from far flung locations.

More research is needed before CO2-recycling urban gardens become a reality: “There is a lot that has to be figured out before a system can be developed that can be installed on rooftops,” Buckley says, adding that they hope to continue investigating the impact of building exhaust on crop growth at new study sites in the future.

But the findings so far may already have strengthened the case for urban farming. “This is only a taster of what is possible,” Buckley says.