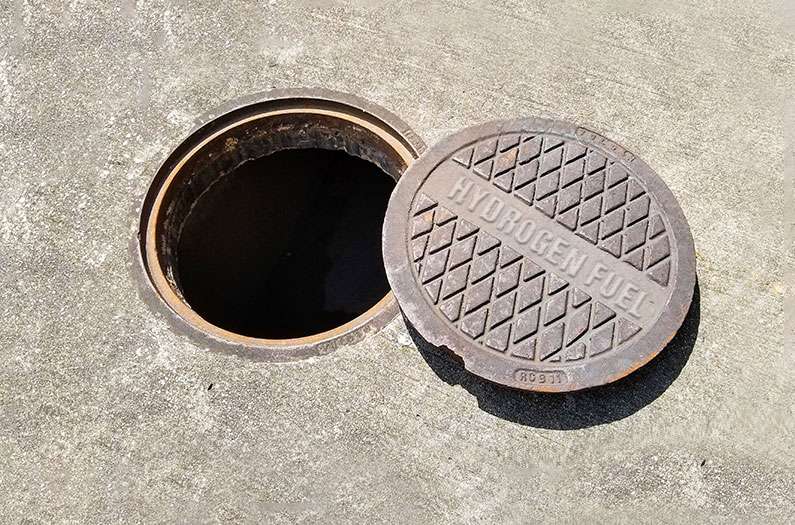 Thousands of tons of harmful hydrogen sulfide (infamous for its rotten egg smell) are produced every year; researchers have found a simple way to tap into this wasted source of hydrogen.
By Prachi Patel
November 3, 2022

In an ingenuous way to convert trash to treasure, researchers have devised a one-step process to produce hydrogen fuel from hydrogen sulfide, also known as sewer gas. The advance is a way to tackle toxic hydrogen sulfide emissions while sustainably producing valuable hydrogen.

Infamous for its rotten egg smell, hydrogen sulfide is a colorless gas produced when microbes break down organic matter. It emanates from sewers, landfills, and wastewater treatment plants.

The gas is flammable, corrosive, and toxic, and high emissions can result in hefty fines for industries. Yet, mitigating the emissions is expensive. It typically involves chemical strategies such as reactions with oxygen or various calcium, magnesium or iron salts.

The most common remediation technique is oxidation, which requires multiple steps and high temperatures. It converts hydrogen sulfide into various forms of sulfur that can be removed from solution, while the hydrogen gets dissolved and wasted. In a world where hydrogen is gaining traction as a fuel, this is an untapped source of clean hydrogen.

So Naomi Halas, a professor of chemistry at Rice University, and her colleagues came up with a way to capture that valuable hydrogen. They started with silicon dioxide powder, and coated the grains in the powder with tiny nanometers-wide particles of gold.

When these gold nanoparticles absorb certain wavelengths of light, they generate high-energy electrons that can act as catalysts and trigger chemical reactions.

The researchers placed the nanoparticles in a reactor and injected hydrogen sulfide gas into the reactor. When they illuminated the mixture with LED light, it catalyzed a reaction that splits hydrogen sulfide into hydrogen gas and sulfur. Details on the method, which is fully light-powered, appear in the journal ACS Energy Letters.

Since the method only needs visible light and no heat, it should be relatively straightforward to scale up using solar energy or efficient LED light, Halas said in a press release. And its cost should be low enough for cleaning up hydrogen sulfide from sources like sewer gas and animal wastes.

“The phrase ‘game-changer’ is overused, but in this case, it applies,” she said. “Implementing plasmonic photocatalysis should be far less expensive than traditional remediation, and it has the added potential of transforming a costly burden into an increasingly valuable commodity.”