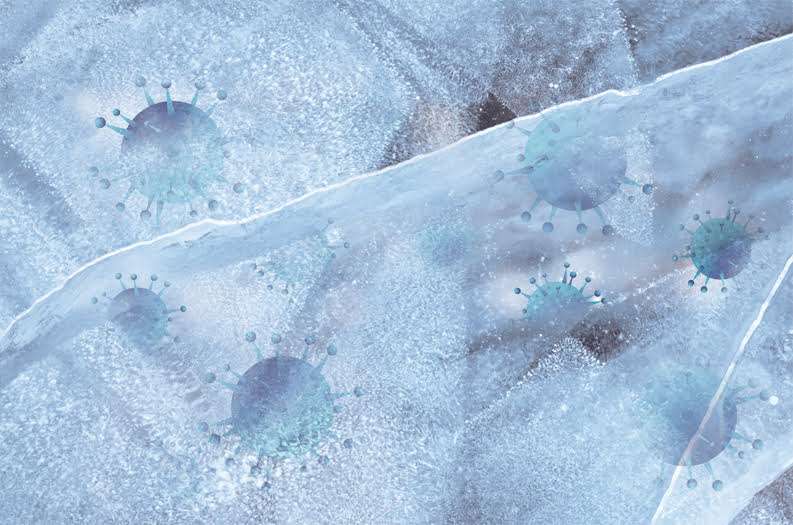 As climate change and pandemics reshape the world we live in, say the researchers, we need to understand how the two processes interact.
By Sarah DeWeerdt
November 1, 2022

High volumes of glacial runoff are associated with greater opportunities for viruses to jump from one species to another, an analysis of genetic material from the Arctic shows.

The findings suggest that as climate change increases glacial melt, this risk of spillover—when a virus infects a new host species for the first time—could make the Arctic a hotspot for emerging pandemic risk.

Many analyses of pandemic risk emphasize tropical and subtropical parts of the world where rapid development and ecosystem change is bringing people into increased contact with wild species—and the pathogens they carry. But the Arctic is changing rapidly too: it’s warming faster than the rest of the world, and that warming is in turn spurring new development and changing the distributions of wild species.

This means it’s important to quantify and track the risk of viral spillovers in the Arctic, a team of researchers from the University of Ottawa in Canada argues.

In the new study, the researchers collected soil and lake sediment samples from around Lake Hazen in Nunavut, Canada. Lake Hazen is located at 82° N on Ellesmere Island, and is the largest freshwater lake in the high Arctic. The samples came from an area without glacial runoff, a site near a small glacier-runoff fed creek, and sites near larger glacial inflows.

The researchers extracted and sequenced the genetic material from the samples to gain insight into what viruses and host species were present in the area. The sediments contained genetic material from viruses, bacteria, and a variety of eukaryotes (life forms made up of cells with a nucleus, a group that includes humans and other vertebrates), the researchers report in the journal Proceedings of the Royal Society B.

The majority of eukaryote viruses present were ones known to target plants and fungi. But spillover risk was highest for animals and single-celled organisms called protists.

On its own, more meltwater might not cause a problem. But, “should climate change also shift species range of potential viral vectors and reservoirs northwards, the High Arctic could become fertile ground for emerging pandemics,” the researchers write. In this way, climate change could provide a one-two punch increasing pandemic risk—making monitoring for emerging pathogens in the far North even more urgent.