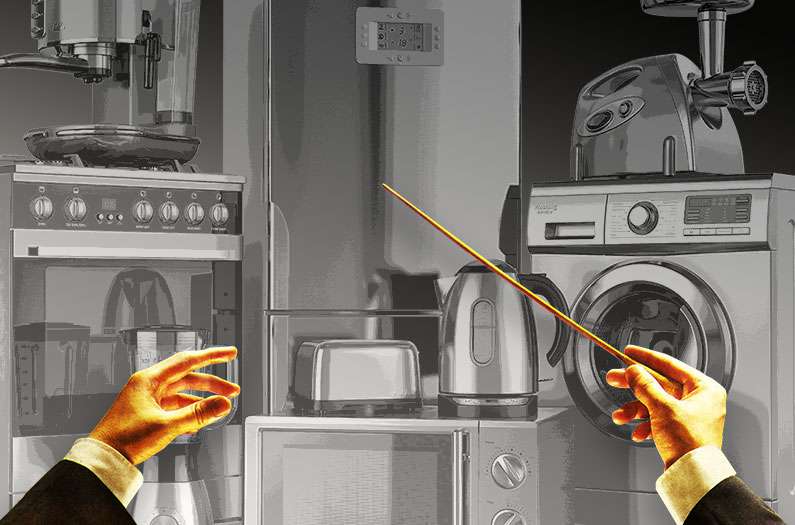 Orchestrating chatter between appliances could save a surprising amount of energy

An algorithm that enables neighborhood air conditioners to coordinate and stagger their operation could shrink peak power demand on hot days by more than one-quarter, a new analysis reveals.

What’s more, the new method saves energy without any inconvenience to users. That’s different from past methods to reduce demand spikes, which usually involved top-down methods such as utilities turning off air conditioners or raising their temperature set points, leaving users to swelter.

“This is a really exciting study,” says Jay Turner, an environmental studies professor at Wellesley College in Wellesley, Massachusetts, who was not involved in the work. With the new method, reducing peak demand “can be done without compromises – the temperature would stay the same, but the a/c unit or other appliance would just run a few minutes earlier or later than it might have otherwise.”

The basic idea is this: appliances that maintain temperature set points, known as cyclic load devices, would send out and receive information from other nearby devices about how urgently they need to run. Low-priority devices, meaning those that are closest to their temperature set point, turn off until the total power load is reduced below a given threshold.

Kircher and his colleagues describe a series of algorithms to manage turning on and off these cyclic load devices in a paper published in the journal IEEE Transactions on Power Delivery. A key advantage of the approach, they say, is that it doesn’t require any central coordination, reducing the risk of hacking.

Implementing the system would require some design tweaks to air conditioners and similar devices. “Ideally, manufactures would build in communication and control capabilities on the factory floor,” Kircher says. “In the field, a new machine could just plug in, join the local communication network, and start coordinating its operation with its neighbors.” It would be important for different manufacturers to agree on the same priority system in order to ensure fair play, he adds.

To gauge the difference the approach might make in the real world, the researchers modeled what would have happened if it had been used during an August 2020 heat wave in Sacramento, California that resulted in rolling blackouts across the state. Compared to a system in which devices simply follow the dictates of their own thermostats, the priority control system reduced peak power demand by 28%, the modeling showed.

The new approach results in about the same overall power use as the current approach. But reducing peak demand is a big deal, Turner says. “Peak demand is the worst-case scenario for the electric grid,” he explains. “We invest a lot in the electric grid so it can meet peak demand, even though demand approaches that levels only a few times a year. Any reduction in peak demand will mean substantial reductions in both infrastructure and electricity generation costs.”

Reducing peak demand is especially important given the push for home electrification, which will mean thousands more heat pumps, car chargers, water heaters, and so on all needing juice from the grid. “This study shows that by allowing those appliances to communicate, we can substantially reduce peak demand, and the needed investments in the grid,” Turner says.

The researchers also showed that instead of prioritizing devices by proximity to temperature set point, algorithm could prioritize by run time—that is, devices that have been on the longest would be first to turn off. This would reduce the bandwidth required for communication between devices to a bare minimum that could possibly even be conducted over power lines themselves.

The approach mainly applies at the scale of a neighborhood, a large apartment building, or a hotel with a few hundred machines linked up together. Across larger stretches of the grid, for statistical reasons that Kircher describes as “a bit arcane,” the coincidental turning on of a large fraction of devices at the same time that drives spikes in neighborhood power demand tends to get smoothed out. “Demand peaks are also a problem at the scale of a city, state, or region, but we need other tools at those scales,” he says. “Energy storage is a good option there.”

The next step is to see how the system works in the real world. “I’d like to see these methods implemented in a field trial,” Kircher says. “My collaborators have tested aspects of the technology in the lab and in a 20-story apartment building, but an end-to-end field test would be really cool.”

Recommended Reading:
Collective battery storage could be the secret ingredient to a climate-friendly grid